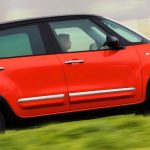 The 500L launched in 2013 in the UK was an extension of the new generation Fiat 500 city car launched in 2007. That generation was a modern interpretation of the original Fiat 500, also known as The Cinquecento, launched 60 years ago in 1957.   The family was further extended in 2015 with the introduction of the Fiat 500X Crossover.   The Fiat 500L was introduced as a five seater MPV … END_OF_DOCUMENT_TOKEN_TO_BE_REPLACED