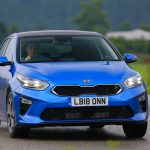 It’s all change with Kia as it moves up a gear. The Korean carmaker has recorded its best-ever UK half year sales figures with 53,232 new cars delivered to customers by the end of June 2019. That performance bucked the general market trend and surpassed 2018’s half-year figure of 51,506 by 3.35 per cent. The new Ceed series runs to nearly 20 models using petrol or diesel engines from 1.0 … END_OF_DOCUMENT_TOKEN_TO_BE_REPLACED