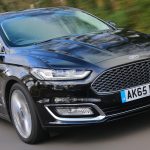 When a giant moves it may not be often but everyone takes notice, says Robin Roberts. Ford held onto the Vignale coach-building name for 42 years before applying it to a hand-finished Mondeo which appeared in 2016 and now its picking up momentum and will be appearing on more bespoke cars. Ford acquired the Vignale name along with Ghia in the early 1970s and while it quickly introduced the … END_OF_DOCUMENT_TOKEN_TO_BE_REPLACED