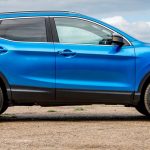 The Nissan Qashqai is a C-SUV segment mid-sized ‘Crossover’ first launched in 2007 and is generally credited with launching the term Crossover. In real terms what does Crossover mean, well the space of a C-segment family hatchback with the raised ride height and styling of an SUV and some models also add the seating and load carrying flexibility of an MPV people carrier. Since the launch of … END_OF_DOCUMENT_TOKEN_TO_BE_REPLACED