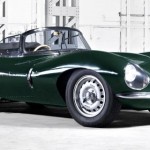 Jaguar will build the stunning XKSS as an ultra-exclusive continuation model of just nine cars each costing over £1 Million. Nine new XKSS’s - often referred to by experts as the world’s first supercar - will be hand built by Jaguar Classic to the exact specification as they appeared in 1957, replacing the cars lost due to the famous Browns Lane factory fire. Tim Hannig, Director Jaguar Land … END_OF_DOCUMENT_TOKEN_TO_BE_REPLACED