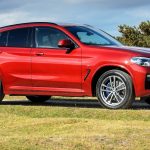 The BMW X4 is a five door aggressively styled coupe version of the X3 mid-sized Sports Activity Vehicle as BMW calls its SUVs.  This is the second generation range and the new X4 made its World debut at the Geneva Motor Show in March this year. Over 200,000 global sales were achieved by the first generation niche model introduced in 2014. As before each version has xDrive all wheel drive … END_OF_DOCUMENT_TOKEN_TO_BE_REPLACED