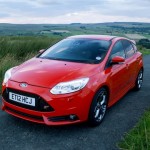 The all-new Focus ST is now in a Ford dealership showroom near you and it will be appearing at your local cinema from the 3 September. The car will be the real star in the new film version of the 1970’s TV series The Sweeney. In this remake for cinema you will find that cops Regan and Carter, now played by Ray Winstone and Ben Drew, have not only changed their looks they have traded in their … END_OF_DOCUMENT_TOKEN_TO_BE_REPLACED