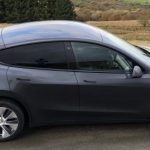 The innovative Tesla Model Y was Europe’s best selling car in September as it built on its engineering expertise and shrugged off competitors. On the eve of the company’s 20th anniversary in 2023, Tesla has been the outstanding if controversial success story over the last two decades, setting engineering standards for traditional car makers to consider and compete with, producing very mixed … END_OF_DOCUMENT_TOKEN_TO_BE_REPLACED