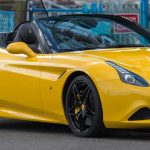 If ever there was such a thing as a bargain Ferrari, then the California T is the model, says Robin Roberts. The dominance of Ferrari in the sports car market has come under threat from a wide range of rivals in recent years, but this summer it nosed ahead again. In June its power plant again won Engine of the Year and the following month Ferrari announced it was lengthening its 12 years … END_OF_DOCUMENT_TOKEN_TO_BE_REPLACED