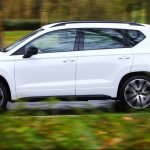 You’ve heard the name Cupra before, it’s been used and still will be for the name of SEAT’s most potent sports models, but this time its reborn, writes David Miles. The first Cupra was developed by SEAT Sport and launched as the Ibiza Cupra in 1996 but now Cupra is being launched as a standalone sports brand and its first offering is the 153mph Cupra Ateca sports SUV. In the future Cupra … END_OF_DOCUMENT_TOKEN_TO_BE_REPLACED