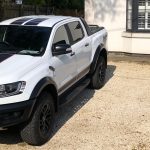 When one of the world’s biggest vehicle makers launches a model you usually have to sit up and take notice, however, the Ford Ranger Raptor demands attention. Based on a conventional pickup which is one of America’s best selling vehicles, the Ranger Raptor SE has been given a performance make-over to cope with both European roads and more demanding driving styles than encountered on the plains … END_OF_DOCUMENT_TOKEN_TO_BE_REPLACED 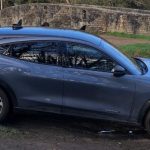 A famous name from the past will lead Ford’s fight for sales in the new all-electric age of our cars. The venerable Mustang name has been cloned from the muscle sports car launched in the mid-60s and now in its seventh generation as the brand’s longest-lived nameplate on a family SUV. The Mustang Mach-E is vitally important to Ford and in familiar style has arrived with a choice of … END_OF_DOCUMENT_TOKEN_TO_BE_REPLACED 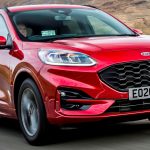 Ford has been a bit slow pushing into the hybrid sector, but I think it's been worth the wait to drive the Kuga PHEV. The highly popular SUV behind the blue-oval badge has been well designed and developed for today's buyers of family cars who want to have as few compromises as possible but also need a good range. The recent petrol fuel shortages meant the car's reasonable electric only … END_OF_DOCUMENT_TOKEN_TO_BE_REPLACED 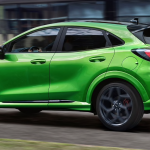 Ford’s future lies in models such as the Puma ST. Drivers of a certain age will fondly remember Ford’s sporting derivatives of fairly ordinary, nothing-to-shout-about family cars.   The world has moved on in the last five decades and families have also changed and want something more than a saloon or hatchback. So it was only a matter of time before the marketing and engineering people at … END_OF_DOCUMENT_TOKEN_TO_BE_REPLACED 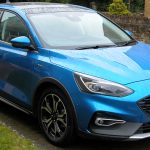 Ford say their new passenger cars are going all electric in Europe and will not have internal combustion engines from 2030, writes David Miles. Their commercial vehicle ranges will follow that move a couple of years later and by 2026 all their new cars in Europe would be fully electric or plug-in hybrids. But for the here and now in addition to conventional petrol and diesel labelling the … END_OF_DOCUMENT_TOKEN_TO_BE_REPLACED 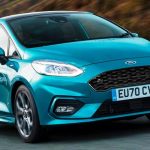 One of the many recent updates to Britain’s best-selling car in 2020 was the introduction of mild hybrid support for their 1.0-litre, 3-cylinder turbo petrol 125 and 155hp petrol engines used in the Fiesta and other Ford model ranges, writes David Miles. But it’s the latest Fiesta 1.0 mHEV 6-speed ST-Line Edition 5-door version I am trying for this part of the lockdown period priced at … END_OF_DOCUMENT_TOKEN_TO_BE_REPLACED 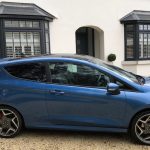 More than any other car in modern times, the Ford Fiesta has defined British motoring and the ST-series is the most desirable, particularly among rally fans. Consistently one of the top selling cars in the UK market, the Fiesta is the right size for thousands of buyers looking for three or five door jack-of-all-trades transport. It has appeared in the top ten list every year since 1977 and has … END_OF_DOCUMENT_TOKEN_TO_BE_REPLACED 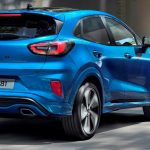 The Ford Puma is the company’s latest crossover and it’s strongest new generation of family cars to date. The name has been used before by Ford and between 1997 and 2002 it was on an unusual model, a compact three-door coupe. That was based on the latest Fiesta and ironically the new car is also derived from the current Fiesta.   Built in Romania and slotting between the EcoSport … END_OF_DOCUMENT_TOKEN_TO_BE_REPLACED

After the Coronavirus lockdown Ford is in full delivery mode with the all-new third generation Kuga SUV 5-door range, writes David Miles. That’s good timing as pent-up demand by UK customers saw overall new car sales increase by 11% in July but sadly remain nearly 42% down for the year-to-date.   The Kuga is crucial in Ford’s sales performance as it is their third best selling model range … END_OF_DOCUMENT_TOKEN_TO_BE_REPLACED 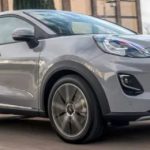 Ford revealed its new 5-door Crossover – you could call it a compact SUV –  towards the end of last year with UK deliveries scheduled in January, writes David Miles.  However the COVID-19 lockdown derailed delivery to over 7,000 early adopter customers awaiting this new addition to the market place and more than 90% have  chosen the petrol/hybrid 48V  mHEV models. My initial test drive programme … END_OF_DOCUMENT_TOKEN_TO_BE_REPLACED