You are here: Home / Roadtests / You’ll warm to the latest Peugeot 208 GTi 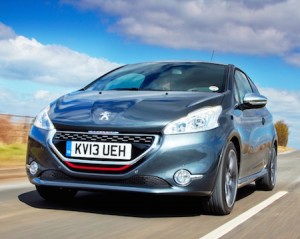 To celebrate the 30th anniversary of their GTi models Peugeot has come up with a limited edition of their 208 with added GTi spec and performance.

If you haven’t seen the television advertising for the 208 GTi 30th Anniversary three-door model I suggest you do. – it’s a good ‘brand image builder’.

Never fear though there is another option – the marginally less powerful but considerably less costly 1.6-litre, 200hp, GTi 3-Door priced from £19,100 and these are readily available.

The 208 GTi 30th Anniversary version has a revised version1.6-litre THP turbocharged 206hp, 300Nm petrol engine with a six-speed gearbox. It also has a Torsion differential system, wider front and rear tracks, lowered suspension, uprated steering and brakes, extra width sports body side skirts and wheelarch extensions, 18-inch wheels upgraded interior spec and special paintwork options.  The limited special edition versions were built by Peugeot Sport to celebrate the anniversary of their GTi models which began with the iconic 205 GTi three decades ago in 1984. That was followed by the 206 GTi in 2003, the 207 GTi in 2007 and the latest 208 GTi now.

As the 30th anniversary 208 GTi units are all spoken for by customers for this road test I went the slightly less ‘hot’ route with the 208 three-door GTi Prestige powered by the 1.6-litre THP 200hp/270Nm turbocharged petrol unit.

The 208 GTi is available only as a three-door hatchback in keeping with its sports image but there are two levels of specification, the GTi priced at £19,100 and GTi Prestige at £19,950.

With its three door body style, added GTi badging and trim this ‘warm’ version of the 208 has a purposeful stance but retains the attractive overall appearance although the grille is not its prettiest attribute.

Under the skin the front track has been widened by 10mm, the rear by 20mm and the car has an 8mm lower ride height.  There are also modestly sized wheelarch extensions, extended side sills and a rear roof spoiler which enhance the sporty appearance without making it too garishly hard-core.

Inside, as usual with Peugeot models, the design and build looks and feels high quality and to me it’s very appealing.  Like the exterior treatment the inside looks sporty without being too aggressive and combined with its high quality it provides a comfortable driving environment.

Of course the three door layout, for me, can be a compromise in usability especially if rear seat passengers need to be carried on a regular basis as the rear seats are small and there is very limited leg room. 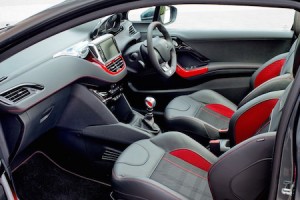 The dashboard has red over-stitching with red inserts graduating to black which match the door pulls.  In the centre of the fascia is the touchscreen and thankfully unlike the more recent 308 not all control functions are operated via the tablet type system which is time consuming and not user-friendly.

On the 208 the heater controls for instance are positioned in the lower centre console below the touchscreen and are simple and safe to use. The hallmark small diameter steering wheel allows the rev-counter, speedometer, temperature and fuel gauges to be viewed over the top of the steering wheel rim if you are tall like me.  If you are not then the height adjustable seat function will be useful.

The 7-inch high resolution touchscreen allows access to the radio, Bluetooth and playing music via a USB connection or audio streaming.  For the top spec GTi Prestige it also the touchscreen also accommodates the sat-nav system.

At the heart of the production 208 GTi models is a 1.6-litre, four-cylinder turbocharged high-pressure petrol engine, technology known as THP.

In this state of tune it gives 25% more power than other THP engines, except for the limited edition 30th Anniversary model.   With 200bhp and 275Nm of torque or ‘grunt’ from 1,700rpm zero to 62mph takes an impressively short 6.8-seconds and top speed is 143mph.   The official Combined Cycle fuel economy is 47.9mpg with CO2 emissions 139g/km. The GTi Prestige insurance is rated as group 33E and 30E for the lesser specced GTi.

It is worth a comparison that the latest ‘breathed upon’ version of this engine used in the 30th Anniversary special edition model has 206bhp with 300Nm of torque. It has the same top speed and is only 0.3-seconds quicker for the zero to 62mph acceleration time.   However it is more fuel efficient giving an official 52.3mpg and has CO2 emissions of 125g/km.  The insurance group is 34E.

Going back to the performance of my test GTi Prestige version; the engine is sporty but more importantly it is remarkably flexible and responsive.  It is not temperamental at low crawling speeds in traffic and it has impressive mid-range response even in sixth gear.

It delivers when immediate pace is needed to overtake slower dawdling traffic in the 40 to 60mph zone.   The engine never really becomes vocal or sound stressed when pushed hard and it’s smooth and quiet at normal driving speeds.  It is also reasonably fuel-friendly with 37.1mpg recorded for my week long test driving period but that fell a long way from the official figure even though my usage was watchful due to the snow and icy conditions.

Ride comfort despite its lowered ride-height is remarkably good but faster running over poor rippled road surfaces did unsettle the car to some extent and the noise intrusion became more apparent.  The steering was sharp and accurate allowing precise positioning during cornering with good feel feed-back. 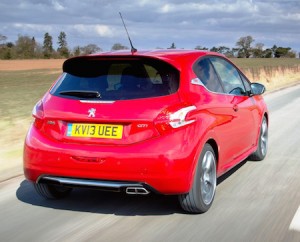 This is important as there is always a tendency for the front wheels of high performance hot-hatchbacks to lose grip and go into understeer mode during enthusiastic cornering.

There was some torque-steer during acceleration from standstill but only on dry roads.

The 208 GTi is not quite as polished in the handling department as its main competitor, the Ford Fiesta ST3, but it is a lot better in terms of design and refinement in the cabin and has more power output for more or less the same price.

Wanting something less hot?  There is a wide range of models in the 208 B-segment ‘supermini’ sized line-up of three and five door hatchbacks. Prices start from £10,195 and there is a wide selection of fuel and CO2 efficient petrol and diesel engines making it Peugeot’s best selling model range.