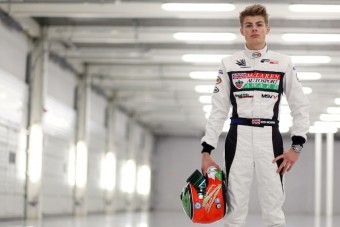 Wales multiple motor racing champion Seb Morris is just days away from his eagerly awaited race debut in FIA Formula One World Championship support category GP3, and the 19-year-old says he is as well prepared as possible ahead of the season curtain-raiser at the Circuit de Catalunya in Spain.

Rounds one and two of the championship, which will be screened live in the UK on Sky Sports F1, mark the start of a key year in the Welshman’s career as he aims to make the same sort of impression on the international stage as he has at British and European level over the last five years.

Although focused on taking each race as it comes, the Status Grand Prix driver is targeting a consistently strong start to the season and is hoping to replicate the excellent pace he displayed in the recent officially timed test at the Barcelona track when he was fastest on the first afternoon.

“It should be a good first weekend in GP3, we’ve gone well in testing and hopefully the conditions of the track will remain the same for the races as they were when we tested there”, said the Marford driver, “I’d like to qualify in the top 10, that’s the aim, and score some good points from there. I’m happy with the car, we’ve got a set-up suited to my driving style which is working well.

“Over a qualifying lap Barcelona is a really nice circuit to drive, very satisfying when you get your lap right, so I’m interested to see how it will be in race conditions. One of the key things at the weekend will be the tyres and how well they hold on during the races, the track is quite abrasive so looking after the tyres will be very important.”

In his maiden season on the F1 package, Seb will not only fly the flag for Britain as a part of the prestigious MSA Team UK initiative, he will also represent the FIA Institute Young Driver Excellence Academy. He is also a brand ambassador for Serge DeNimes and Oxford Vaughan.