As the official high profile vehicle supplier to the London Olympics, with 3,200 EfficientDynamics cars and 800 other vehicles and cycles and the event starting this week, you might think BMW already has enough on its plate.

Despite the increased brand awareness the Olympics brings for the BMW premium brand, the ‘day job’ of selling cars must go on especially in the current and very competitive recessionary new car market.

Even in these tough conditions BMW has outperformed the UK market overall which has shown a 2.7 per cent improvement M6 Convertible is halo model for BMW brand for the first six months of this year compared to the same period last year. BMW’s UK sales were up by 6.45 per cent to 64,514 registrations. In readiness for the new ‘62’ plate registration month of September, BMW has some timely additions to make to their model line up.

At this week’s media launch event for the new additions, Gavin Ward, BMW Media Relations Manager said, “2012 is already a year to remember, our sales are increasing, we have launched the new 3-Series, the 6 Series Gran Coupe, introduced several additional fuel efficient engines and we were selected to be the official vehicle supplier for the London Olympics. Today we are introducing more new models, variants and engines.”

On the issue of being selected as the official vehicle partner for the London Olympics Ward said this was achieved mainly because of their EfficientDynamics fuel and CO2 reducing technology applied to all models sold in their wide range of passenger cars.

The Olympic organisers set a target of an average 120g/km of CO2 emissions and 62.4mpg for the fleet of cars required. BMW’s Olympic fleet surpassed that with an overall average of 116g/km and 64.5mpg.

New and additional models introduced to the UK media this week were the all new M6 Coupe and Convertible 560hp V8 turbocharged petrol models available for delivery from September and priced at £93,820 and £99,020 respectively.

These exclusive M ‘halo’ models are normally ordered in top ‘spec’ form by discerning UK customers and actual prices then run out at around £117,000. Just 60 M6 Coupes and 40 M6 Convertibles are available for UK sales in a full year.

Next new variants revealed were the X5 and X6 M50d SUVs powered by the triple turbocharged 3.0-litre 381hp/740Nm diesel unit and priced from £60,340 for the X5 and £62,280 for the X6 sports SUV. This diesel engine is the most powerful ever to come from BMW and the World’s most powerful six-cylinder diesel.

Also added to the 1-Series line-up is the 116d EfficientDynamics three and five door Sports Hatch. This model is the first ever BMW to have CO2 emissions below 100g/km.

The 116d has CO2 emissions of just 99g/km so VED road tax is £0, Benefit-in-Kind company car tax is 13 per cent, they are London Congestion Charge free and have 100 per cent capital write-down allowance for businesses. The official Combined Cycle fuel consumption is 74.3mpg. Priced from £20,885 the 116d ED five door versions are the same price as the standard 1.6-litre 1-Series, the yet to arrive three door version should be around £700 cheaper.

The 1-Series is BMW’s second best selling model range after the 3-Series. Around 18,000 five door and 4,000 three door versions of the 1-Series are sold in the UK. The 1-Series EfficientDynamics models are expected to attract 60 per cent of their sales from business and fleet buyers whereas the same type of customers account for 95 per cent of the larger 3-Series 320d ED model UK sales.

With the Olympics over and the new ‘62’ September registration plate month out of the way BMW will still not be able to rest on their laurels.

“The product offensive is never going to stop” said Gavin Ward. Waiting in the wings to arrive this year are numerous new derivatives, the new 7-Series saloon, the 3-Series Touring and the high performance 1-Series M135i. BMW certainly has a lot on its plate for the next course as well.

The BMW 116d ED is certainly one of the most impressive models never to hit 100, that’s gkm, not mph by the way.

Highly sophisticated engine management, finely honed mechanical changes and some clever aerodynamic tweaks have ensured this produced CO2 emissions of just 99g/km, but you don’t have to drive it as if it’s on its last breath. 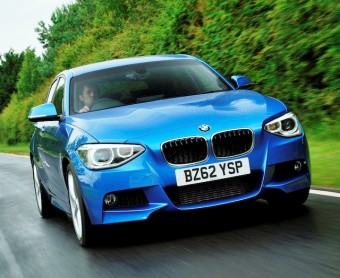 Over a variety of main and B-class roads, where we could fully utilise the six gears, we managed to end up with a reasonable 58.8mpg.

That was due in a large part to the long 5th and 6th gears which did not give the quick take up so evident in 3rd and 4th but which meant you could cruise quietly and economically on a long journey.

For such a journey, the 116d ED is a good performer. Slightly firm springing is offset by a delightfully smooth powertrain, roomy front seats and clear visibility.

It does not make a driver compromise useful performance for economical motoring.

At the other end of the BMW showroom there is little that is economical about the M6 Convertible.

It costs a packet, goes like a rocket, and leaves you smiling like you’ve just landed on the moon. At your fingertips and spread out infront of your eyes is a truly awesome range of buttons, dials and lights.

In your hands is a big 2+2 with an incredibly powerful and responsive 560bhp V8 engine, slick-shifting seven-speed automatic transmission with selectable modes to fine tune the powertrain’s responses to taste, and handling and braking systems that inspire confidence with their capability. We managed about 22mpg.

BMW 116d ED is well rounded executive family car For a sharp sports car it rides surprisingly well and the room in front is good but there’s hardly any legroom behind.

My only surprise was the slowness of the roof to drop or raise. But then I wonder if that is intentional so you can maximise posing potential in between the showers.

The BMW M6 Convertible mixes in some exalted company and its ability to stand wheel to wheel with rivals is impressive and it also shows how overpriced are some of its challengers.