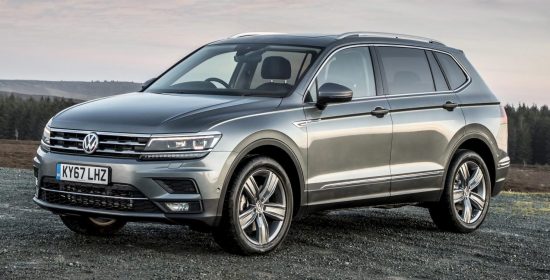 Defying the downward UK car sales trend through 2017 and rising to become the second best selling brand in the country, Volkswagen is out to make a bigger impression this year as it plugs gaps in its range.

One of the spaces falls between the Tiguan SUV and the Touareg 4×4 and its about to be filled by the Tiguan Allspace.

Derived from the Tiguan SUV but using the VW modular platform it has been given a stretched wheelbase and greater overall length than its sibling so it can take more people and luggage. 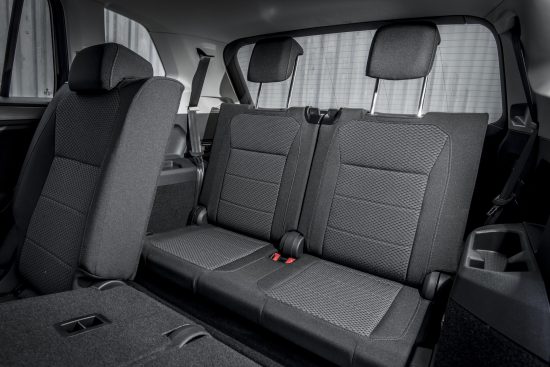 A third row of fold-flat occasional seats means the Tiguan Allspace can carry up to seven people and still boast a luggage capacity of 230 litres or, with five people the luggage capacity is 700 litres, an increase of 85 litres over the ‘regular’ Tiguan (615 litres). 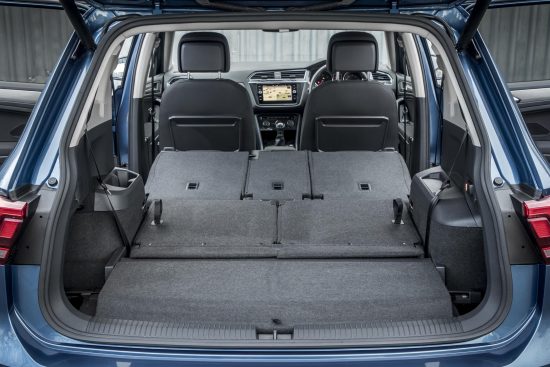 Thoughtfully, the Tiguan Allspace middle row of seats can be slid fore and aft by 18cm, and can also fold flat so with both rows folded, the luggage capacity of the Tiguan Allspace is a cavernous 1,775 litres and that’s over 130 litres more than the Touareg.

VW says it is working towards a figure of £285 over four years for any Tiguan Allspace registered through a PCP scheme.

There will be initially 15 models from £29,370 to £39,950 with the sporting R-Line joining the range after orders open or them late spring this year.

As well as the third row of fold-flat seats every model has standard 18-inch alloy wheels, parking sensors and 3Zone climate control. All have Volkswagen’s Discover Navigation infotainment system with an 8.0-inch colour touchscreen, satellite navigation, DAB radio and a CD player, as well as Bluetooth smartphone connectivity. 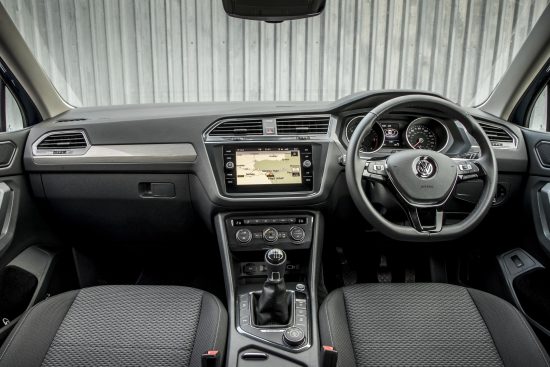 Driver assistance systems fitted across the board come in the form of Adaptive Cruise Control, which tracks the speed of the car ahead and automatically accelerates and brakes the Tiguan Allspace while keeping a safe gap ahead, as well as Lane Assist, Front Assist and City emergency braking.

When it comes, the R-Line will add a variety of sporty styling cues to the Tiguan Allspace, including 20-inch ‘Suzuka’ alloy wheels, sports suspension lowered by approx. 15 mm, a body-coloured rear spoiler, and black interior rooflining.

As you might expect, engines are broadly similar to the Tiguan. The 1.4-litre TSI ACT engine has a peak power output figure of 150 PS with Active Cylinder Technology, which means two of the four cylinders shut down when the car is cruising to save fuel. A second petrol option is the 2.0-litre 180 PS TSI unit, available exclusively with 4MOTION all-wheel drive and a seven-speed DSG automatic gearbox. 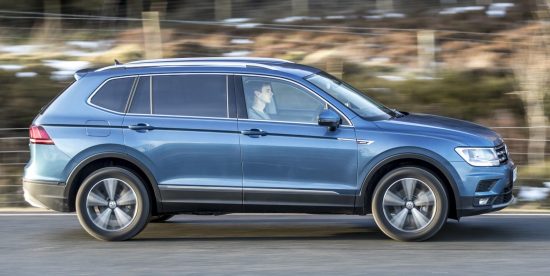 There are three 2.0-litre turbocharged engines, with power outputs of 150 PS, 190 PS and 240 PS. The 150 PS unit is particularly versatile, with the choice of front-wheel drive or 4MOTION all-wheel drive and six-speed manual or seven-speed DSG gearboxes.

All Tiguan Allspace models equipped with 4MOTION all-wheel drive include 4MOTION Active Control that allows the driver to activate one of four driving modes: ‘Onroad’, ‘Snow’, ‘Offroad’ and ‘Offroad Individual’. It tunes the transmission of the car to meet the conditions the driver is facing.

Towing capacity of 1,800 kg to 2,500 kg braked, depends on the engine and gearbox combination and Volkswagen’s clever Trailer Assist system combines the optional Park Assist and rear-view camera to make reversing and parking with a trailer easy and accurate. The optical display visualises actual and possible steering angles and reverse steering is automatic, with the driver side door mirror adjustment switch acting as a joystick. 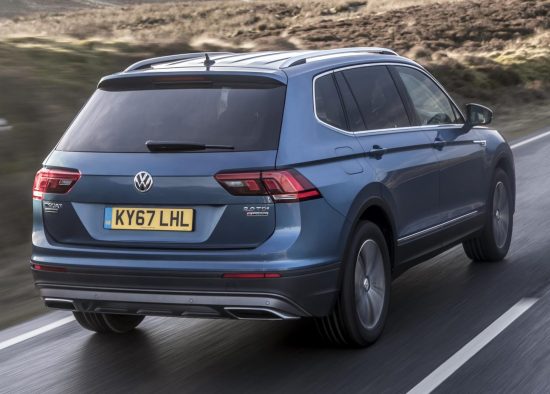 From its UK launch in June 2016 to the end of 2017 more than 40,000 second generation Tiguans have been sold. The Tiguan Allspace aims to further strengthen that sales performance as a standalone car and taking 15% of Tiguan sales in 2018.

The Tiguan Allspace does offer a reasonably enlarged rear seat and loadspace area which will endear it to growing families.

The bigger rear doors give improved access and children will like their own space in the third row once they climb into their seats while there is still a fair amount of space for shopping behind the tailgate with its low-height load area.

Our SE Navigation came well equipped as standard adding options of keyless entry, integrated security and service along with winter pack of heated seats and washer jets together with tyre pressure monitoring. In all it was £34,890 on the road.

There were no petrol models available at launch so we went for the assumed diesel best seller in their line up, the 150ps 2.0 4Motion.

This is a staple powertrain of the VW Group and it offers good acceleration with particularly strong mid-range pull for heavy work or towing, even if in the Allspace it had a muted buzz when cruising.

The Tiguan Allspace handled well, steered easily and slowed without drama while its ride was firm but compliant with limited body roll.

For those who like the Tiguan, the Allspace brings a new dimension – literally – to the choice and without sacrificing anything it adds a bit more.