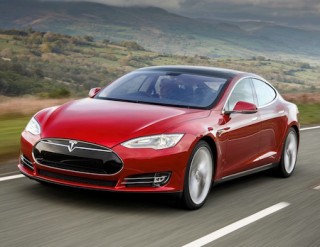 The Tesla Model S P85D has to be the ultimate veggie option, a super-car you can order without any animal components.

While most supercar dealers want to upsell leather and natural fibres for trim and upholstery, Tesla allows the greenest drivers of all to de-select them.

Instead you can have synthetics or materials not derived from animals but plants for the ultimate pure-electric green car ownership experience.

Tesla UK has one on order for a customer who will not only take delivery of a comparatively rare high performance car but ensure it is unique in the world and that will push up its future resale value as well.

Not that that future values should really trouble a Tesla buyer as the company offers a guaranteed buy-back after three years of 50% of the list price plus 40% for added options. That is not something a more mainstream performance car dealer will offer. 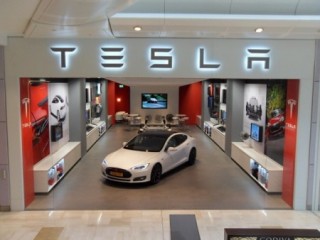 But Tesla do things differently from the start of the ownership experience. They don’t even have traditional big dealerships, for instance. Instead they sell the cars through “centres” in selected high-footfall shopping centres and over the internet as well as having three service centres in the UK, which at Heathrow will also service and look after the owner’s car while they fly away on business or holiday.

Launched in the USA in 2012, deliveries to UK owners started in the summer 2014 and Tesla has not looked back but only forward.

It has steadily developed its exclusive power-train from rear wheel drive only to all-wheel-drive, adding a front electric motor, increasing power output and refining and extending its software downloaded to the car’s 17-inch touch-screen display.

Future model plans are for a seven-seat SUV on the same lightweight dual motor platform as the Model S, and a smaller city car version, over the next two years.

Made in California, Tesla cars will shortly be using a new generation of battery pack using ores mined in the USA and put into batteries assembled there as well before transport to the west coast for vehicle build. It will give the car one of the world’s best carbon footprints for an automobile.

Tesla has also announced a completely new generation of power packs for homes, using green energy as it develops and diversifies its technology.  What’s more it’ s giving away to other car makers patents it has taken out. How green and good is that ?

Just like the latest Model S P85D in fact. This packs in two motors, hence the D for dual in the name, and it punches out 85KW with a potential range of about 300 miles on a full charge, delivered through a conventional single-phase home supply, rapid charger or ultra-quick supercharger taking just a few minutes at selected locations.

How you use it is down to you. There is a normal Sport mode but if you want to be a little more athletic with the accelerator there is the appropriately named Insane mode. I kid you not and the car becomes a serious performance model when you decide to go Insane.

Because of its twin-motors electric power the P85D accelerates extremely strongly from standstill and it snappily responds when kickdown is used for overtaking, but there are no gears just a very pronounced linear acceleration. It is more powerful than the first generation Tesla models and can easily keep up with normal traffic flow on main or motorway roads.

Easing off the throttle instigates an immediate and very strong deceleration  from the motors and negotiating a steep hill on the test route I found you actually had to accelerate to reach the permitted maximum because the engines’ retardation is so strong.

Apart from the initial grab underfoot, the brakes become smoother the harder you press the pedal and there is no conventional handbrake but a park mode on the gear selector substitutes.

Steering is very well weighted and balanced with a good turning circle to get out of car parks or into bays and on the open road it has good feedback without any kickback. 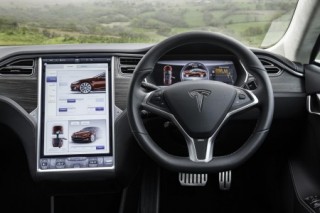 Secondary controls on stalks work wipers and indicators but most other functions are done through the touchscreen display, a massive 17-inch multi-coloured unit angled towards the driver in the centre of the fascia. It does the climate settings, info-tainment, and a navigation service which includes route planning to include charging stations and tells you how much charge it will have when reached and for how long it will need to be plugged in.

You can specify if you want automatic updates to systems downloaded overnight or on demand and more features are being added all the time.

There is even an early version of autonomous motoring possible if you specify options which include active cruise control and embody all-round sensors to monitor other traffic, your progress and alerts you to immediate dangers.

The pickup of the P85D is truly impressive, but so is the way it slows, steers and has a very supple and comfortable ride with extremely good room for four.

The additional front engine has cut into the luggage space but not too much and you have more room in the back as well with a combined total of just under 1,800 litres. Oddments room is excellent and so is head and legroom with very good access through the four doors.

You are aware that it is a wider than normal family car when negotiating some village streets or narrow lanes but you do get use to this. 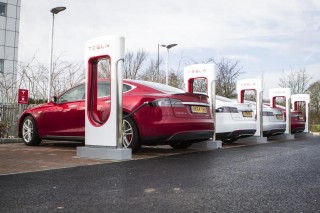 With minimum moving parts the Tesla is mechanically quiet and its shape allows the airflow to pass with little turbulence but the big wheels and tyres do throw up a lot of road noise by contrast, but not as much as I have experienced in other sporting cars weighing more than the Tesla’s 2106KG kerbweight.

At the end of the day, or during if you are making long journeys, charging is simpler and quicker than conventional petrol or diesel refilling; simply pop open the nearside rear port, plug in the charger lead and you go and look up a good vegetarian restaurant for your next meal.

Tesla certainly gives you food for thought about the future of motoring.

Insurance group: 50 or by negotiation