The new SEAT Leon sees the biggest launch in the company’s history for a decade and blends the latest engineering with cutting-edge style which has been a signature of the Spanish brand.

In showrooms this month, the five-door Leon pitches into the C-segment and it will be joined in July by a three-door SC unveiled at the 2013 Geneva motor show and later this year a Sports Tourer which will be shown at the Frankfurt show in the autumn before the sporting orientated Cupra tops the line-up in Britain early in 2014.

It comes after four years of increasing sales for SEAT UK which have lifted registrations by over a third at a time when the UK market has been contracting overall. The two previous Leon generations since 1998 have put over 133,100 models on UK roads and it accounts for a third of SEAT sales in Britain.

Brits have eyes for SEAT

SEAT’s new Leon is engineered on the latest lightweight Volkswagen Group MQB scaleable chassis platform and all versions have MacPherson-type coil over strut front suspension with either a semi-rigid rear axle or those above 150ps benefitting from a multi-link set up at the back. FR models have 15mm shorter and stiffer springs and shock absorbers.

A modular infotainment system brings together essential and desirable data on a single multi-function screen for ease of use.

Sitting on a longer wheelbase and wider track than the second generation Leon, the new model not only has better stability and handling but also more interior room and most versions are fitted with an electronic differential which gently brakes the inside front wheel through a corner to improve grip.

There is a larger 380 litres boot and inside the SEAT Leon designers have worked to create a more driver focused cabin, better controls layout and softer surfaces, using thinner roof pillars to improve visibility while the latest engines are not only more powerful but also use less fuel and produce lower emissions than before.

“Britons love their Leon models, and a last year a quarter sold were FR, FR+ or Supercopa models so we are expecting strong demand for the latest sporting versions and the forthcoming Cupra,” she said.

“The current order bank is showing 60pc of new buyers want the SE trim with 34pc going for the FR versions and the most popular engine is the 105ps 1.6 diesel by a long way.”

Ms Elliott added that 77pc of customers had also ordered the technology pack comprising full-LED headlights, navigation and DAB radio, individually worth over £1,900 but currently incentivized with a £500 cost for them.

CAP residual value tables suggest the 105ps 1.2 Leon will retain 43pc of its list price over 3yrs and the 105ps 1.6 diesel will achieve 44pck, along with the 150ps FR 2.0 TDI, all comfortably ahead of their rivals.

The SEAT Leon Hatch is being introduced with a £1,000 contribution to the PCP finance package, not off the retail price, if taken with SEAT and it includes 3-years free servicing. 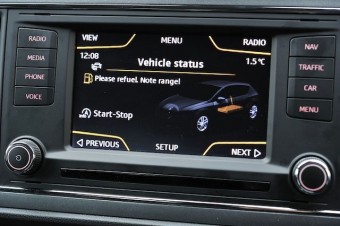 The third generation SEAT Leon is a big step up for the model.

The roominess and ride improvements are immediately apparent, and the latest in-car technology quickly makes an impression through its simplicity and effectiveness. It all works very well together.

The entry level 1.2 TSI petrol is surprisingly good when two people are aboard and working the engine hard did not produce a lot of noise or fuss but it managed to return 38.3mpg on test. 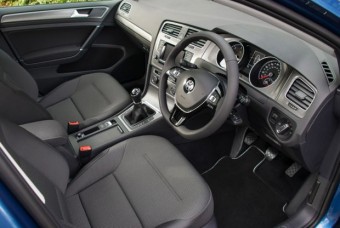 Personally I did not like the dark and very smooth trim and steering wheel which tended to show up fingerprints too easily.

The predicted best selling five-speed 1.6 TDI SE pushed the economy to 48.2mpg and there was more urge in mid-range for overtaking or coping with heavier loading from its 105ps engine, the same output as the 1.2 petrol but developed in a different and more usable way.

The significantly more powerful 150ps 2.0 TDI SE was more composed and capable on cross-country roads with limited overtaking opportunities and it returned only slightly lower economy of 42.1mpg, despite having a six-speed manual box. Trim is more attractive and tactile on the SE versions.

Turning to the sporting FR 1.4 with its 140ps underfoot this was probably the most agreeable in terms of agility and responsiveness although the brakes needed a good hefty shove compared to the diesels and enthusiasm for this meant we saw fuel economy fall to 36.1mpg, the lowest of the day.

By contrast, the gem of the collection was the soon to be added FR 2.0 with its 184ps engine and sitting on a chassis with independent suspension all round for sharp handling, good ride and roadholding.

Despite its abundant performance it returned 41.4mpg, making it a really economical and enjoyable five-door family car.

The new Leon will be a delight for owners of previous generations of the model, with its better access, increased room and its sophisticated powertrains good gearchanges and steering.  Ride and handling is good. 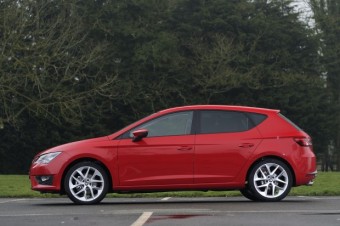 We did notice a couple of the test cars had fasciae and a lower trim which rattled in an annoying way over some surfaces and at certain speed and needed Teflon spray to silence, although these were early build models and may not be representative of the range as a whole. However, potential buyers should listen out for this issue and complain if they find their new model has these problems. It certainly detracts from what is an otherwise well-engineered and enjoyable family or company car.