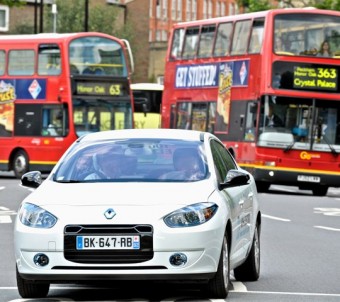 Despite the UK Government’s £5,000 subsidy to each buyer of an electric powered new car sales have been underwhelming.

According to official figures published at the end of last year there were 2,500 UK charging points available, not counting private homes, so that means there are more power points than cars.

The introduction of the Nissan Leaf last year, which costs Renault Fluence ZE offers practical commuting range £25,990 after the £5,000 grant, brought 640 UK sales and that model far outsells the Mitsubishi, Peugeot, Citroen and other electric powered models. But more are on their way, including a plug-in Ford Focus, and of course the list of petrol/diesel hybrid models is growing all the time.

Renault in the UK understandably, given the sluggish take-up by customers, will not commit to indicating how many Fluence saloons they will sell this year. They did say at the UK press launch for the Fluence this week that by 2020 around 10 per cent of the global market will be taken up by electric vehicles and Renault with their partner Nissan will be the market leaders worldwide.

By 2016 Renault and Nissan will have 1.5 million electric vehicles on the road worldwide. Renault will follow up the launch of the Fluence by bringing the compact Zoe and quirky Twizy electric models to market this year.

After taking the Government’s £5,000 electric vehicle grant the Renault Fluence Z.E. costs £17,495 for the Expression+ version and the technically identical but higher specification Dynamique version is £18,395.

The big difference in the lower price of the Fluence against the Leaf, which uses more or less the same powertrain but a different platform, is that customers pay more for the Leaf because they buy the battery. The Fluence owner buys only the car but rent the battery.

The battery has a life estimated to be between eight and ten years but a battery will be changed under the rental agreement free-of-charge when it becomes less than 80 per cent efficient. 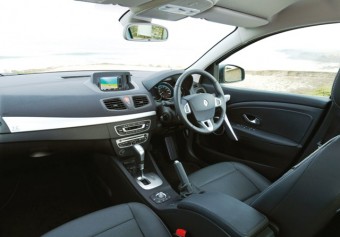 Renault UK’s director of communications Jeremy Townsend said, “We appreciate electric vehicles are not for everyone and with them accounting for 10 per cent of the global market by 2020 that still means 90 per cent of all new cars sold will still be petrol/diesel or hybrid powered.”

He added the Fluence with a fully charged battery has a range up to 115 miles and will be used as a commuting car or as a second car.

There is considerable interest in London for example from private hire and business chauffeur operators as the vehicle is exempt from the Congestion Charge and can be operated in zero emission zones. Companies operating limited mileage journeys and wishing to promote their ‘green’ credentials are also likely customers.

The all electric Fluence is CO2 emission free at the exhaust tailpipe but given that 70 per cent of the UK’s electricity is provided by coal, gas or oil taking that into account the estimated CO2 emissions are 70g/km.

But said Townsend if we do that comparison against a low emission petrol or diesel car emitting around 100g/km of CO2, to be accurate 10 to 15 per cent has to be added to that figure to take into account the CO2 emissions produced in the processing of petrol and diesel from crude oil.

The major downside of owning an electric powered car has been the high purchase price over a conventional petrol, diesel or hybrid powered car of the same size, the short driving range, lack of charging points and the high cost (around £900) of having installed domestic high capacity charging facilities.

The £17,495 starting purchase price of the new Renault Fluence Z.E. all electric C-segment saloon partially addresses the purchase price because that does not include the price of the battery which has to be rented from Renault with a typical monthly cost of around £89 for a three year, 9,000 annual miles period.

The driving range is still an issue with 115 miles being the official figure but this can vary with use from 60 miles with a fast motorway trip to 125 miles for low speed in town commuting journey without the use of too many electric power functions such as air conditioning.

A full battery recharge will take between six and eight hours using Renault’s recommended Wall-Box system from British Gas – its preferred partner for providing recharging systems and infrastructure. It is part of the cost efficiency of Fluence Z.E. because owners can take advantage of lower tariff electricity by scheduling their recharging during off-peak hours.

A full charge, depending on the electricity supplier’s rate will be around £2.50. Using an optional EVSE 10 amp battery connecting cable, Fluence Z.E. can also be recharged from conventional 240V, 13 amp power supplies at workplaces and at roadside charge points or at home.

Three hours charging will be sufficient for around 25 miles but a full charge from a 13 amp domestic ring-mail plug can take around 11 hours and conventional DIY extensions cables cannot be used.

Built in Turkey the Fluence is a four door, four to five person saloon and uses an extended Megane platform. The overall length has been extended by 1,300mm to 4,750mm so although it is classed as a C-segment (Ford Focus) sized car, to look at it appears more of a D-segment car (Ford Mondeo) in length.

Inside the Fluence it is typical in style of what we expect from the Megane with comfortable seats and lots of equipment. But the battery pack is located behind the rear seat backs and takes up a large proportion of the space, not to the detriment of rear passenger legroom, but intrusion into the boot.

Dust off your copy of the Highway Code for a future behind the wheel of a Renault Fluence because you could need it.

It looks like a conventional saloon car both outside and in, the controls are very familiar but its inaudible start up immediately makes you sit up and take notice of its electricity storage meter. 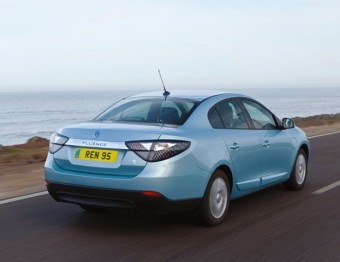 While you appreciate its silent seamless acceleration you cannot help but look at the amount of electricity being used during a journey and then imagine ways you could save still more. Leave or turn off the heating and ventilation, question whether it is dark enough to escape using your headlights, and open your driver’s window to give the hand signals in the Highway Code to save more by not operating the indicators.

Yes, you can become paranoid about electric power. Range anxiety is what it’s called. But do you really need to be?

Renault, and other EV car makers, stress that for many commuters their new generation of cars and vans are eminently suitable, while also acknowledging that for others the suitability is still biased in favour of conventional engines, whether petrol or diesel.

On the test when my colleague saw the range rapidly shorten from under 100 miles to 66miles and even down to 31miles at one point, I managed to progressively raise it from about 90 miles to 115 miles, although I had actually been driving at reasonable speed over a variety of roads including motorways, flat A-roads and winding B-roads.

So what does this tell you about the Fluence ZE? Not a lot. It is a very technically advanced car which responds in different ways to different drivers and its ingenuity belays its fairly conventional appearance.

The concept that you can actually drive further and see the range extending while knowing your energy is being depleted borders on perpetual motion, so that strikes you as impossible.

In fact, for many users the instant electric acceleration means you can keep up with traffic, even overtake when the opportunity arises, and the deceleration is very strong without having to brake so you have to momentarily tap the pedal to let following drivers know you are slowing.

I liked the amount of rear seat legroom but would struggle to fit more than a small shopping trip or one large suitcase in the boot, which does not have an inner recess to close it so you hands get dirty on the outside of the lid.

Nevertheless it is the largest EV currently on sale in Britain and it will be interesting to see how the entire EV market pans out over the next few years. Will the small cars and vans dominate or the larger models prove more popular than now thought?

Unlike its smaller rivals, the Fluence is not so much a commuter car as a car for a commute when occasion demands. Most of the time it is perfectly capable of doing a day’s running around, being charged at home, a friend or relatives house while away and then return.

The future will make us all look at how we use energy, our cars and what we want to do and are prepared to pay to do that. For now the Renault Fluence ZE is the most civilised concession to that future, even if you have to defer to hand signals.

Against: Still more costly to buy and then rent the battery than owning a conventional petrol or diesel powered car of the same size, unpredictable driving range, limited appeal because it is only a commuter car for short journeys. ©David Miles