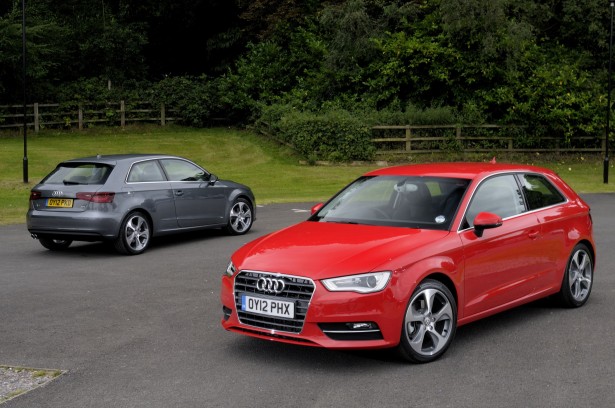 The Audi A3 v.3 is going to do for the brand in Britain what computerfiles would call system restore, with the latest upgrades you’d expect thrown in.

Originally launched in 1996, the Audi A3 was arguably the first modern compact executive car and after the v.2 series debuted in 2003 it grew to account for about 20pc of the brand’s UK sales, until the A1 hit the showrooms.

This sub-compact premium car not only took on rival brands from Germany but it also impacted on the A3 sales, which gradually fell to 5pc of what they were.

Now the third generation A3 is aimed at recapturing this lost percentage with the latest three-door anticipated to find over 8,000 British buyers and from Spring 2013 the five-door sportback is looking for 20,000 sales.

By then there will be a fuller range of engines, including a cylinder-on-demand 1.4, and a Quattro derivative as well.

Since v.3 A3 was announced in the summer a good order bank has been built up for the 62-plate change and Audi UK product manager for the A3, Rob Morris, said,” The A3 is a very important model for us.

“Historically it took 20pc of UK sales and until the A1 arrived it was the entry point to the brand on price, but the A1 changed that and we lost sales of the A3 as a result.

“Now we have taken a careful look at the UK market and with the new generation of A3 we are not only launching a new car which is keenly priced but which also has a completely different specification to the previous series and it’s a really good price proposition in its class.” 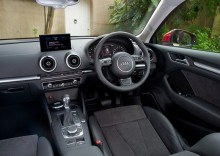 Depending on engine choice the transmissions attached are either 6-speed manual or 7-speed S tronic. As part of the review of specifications and technology and depending on the chosen model a buyer can now select any of six suspension set ups as well based on standard, sports and S line.

The v.3 A3 uses more aluminium and high strength steels for lightness as part of the first utilization of Audi’s MQB scaleable platform and new body panels technology. It means the new models are lighter overall, but also in particular over the wheels, while the car has a longer wheelbase than before to improve room and ride and it has also picked up the maximum Euro NCAP crash safety rating in August.

Audi is particularly pleased with the contemporary styling of the new A3 both inside and out, together with the panel fit and trim packaging.

Analysts at CAP Monitor have also predicted the new models will produce least depreciation and lowest running costs in their class.

Audi UK director Martin Sander said, “It is a rough market today. But we are growing market share in the UK and we are number four in the world.” 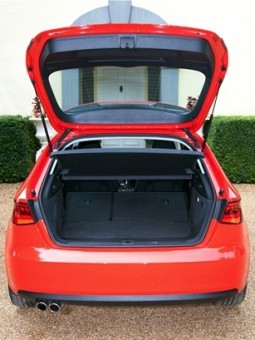 He added,”The A3 is very important for us and has given us 20pc of our sales and since 1996 we have sold more than 330,000 in the UK since it established the premium compact class.

“We have a big loyal customer base, some 60pc come back to us, and we hope the new A3 will build on this in future and we can grow market share.”

Audi UK head of PR Jon Zammett added, “The new A3 is aimed at the computer orientated generation with its clean styling, colours, textures, fit and finish and who expect things to work intuitively and logically. They are very demanding buyers who expect the best, a quality product which they can use and rely on and who will not accept second best or a product which pretends to be something it isn’t, and the new A3 fully meets their expectations on all levels.”

Put a stick of computer geeks in a room and you can guarantee one thing, they will all have different opinions on the best operating systems and hardware, and that is very similar to premium car sector buyers.

The fact that many of these buyers will be members of the IT-crowd, the Information Technology crowd, and you begin to understand the complexities facing the creators of the new Audi A3. A3 has new front grille and lights. 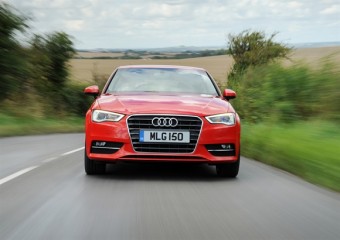 It has a good history stemming from innovation but new models and updates, including some also sporting the four-circles logo, have taken a toll on the A3 and its sales performance slowed like an over-worked hard-drive.

Since the second generation or A3 v.2 launched in 2003 a lot has happened in the market and expectations have risen, even outstripping the price base, so that today’s v.3 buyers expect more for less or the same price.

Enter the new Audi A3.

Its visually smarter, physically lighter, packed with more technology and it goes further and faster while running cooler on less fuel than before.

Most popular in the new A3 series will be the 2.0 TDI taking about 40pc of sales, and this is the model we elected to initially test in its new Sport trim with Audi drive select adaptive dynamics system appearing at this level for the first time.

Over a mixture of 140 miles of motorway, main and secondary roads of varying surface quality, we experimented with the adaptive system and generally agreed its comfort mode was the best. It allows the driver, or alternative driver, to try and decide upon which setting is preferable and also how responsive they want the steering and throttle to be. If fitted with an automatic box it also alters the shift points.

Our manual six speeder with the 150ps engine was a good combination, giving good flexible pickup, strong acceleration and a long-legged motorway gait so we ended up with nearly 55mpg on test without even trying to be economical.

The steering and throttle on comfort setting is a little treacle like in response but more fluid when you move into the dynamic mode, and you can even tune it further to be automatic, efficient or individual in nature. A bit like which web-browser you prefer to use.

Access is very good to the front pair of seats but there is a less dignified entry into the back, the third door opens from low down and the aperture is big, while the seats are of good size and shape with excellent adjustment range. The rear folds down 60/ 40 to increase the nominal 365 litres of boot.

Whichever suspension setting you select the road noise in the 2.0 TDI Sport on its optional 18-inch x7.5J alloys was intrusive in an otherwise calm cabin and contrasted with the quieter and smooth riding SE version also tested, but on 17-inch wheels.

Visibility to the front and side is very good, slightly restricted over the shoulder and I thought the interior mirror and rear window were on the small side.

Inside, the fit and finish are excellent, the controls all come to hand and immediately to eye and the instruments are sensibly sized while the air conditioning kept a good temperature.

There is no doubting the new A3 is a big advance over the previous generation, which will delight discerning drivers. We also know that some significant additions are coming to further widen the range and help Audi recapture a sector they partly helped to loose.

So it’s game on with this particular netbook.