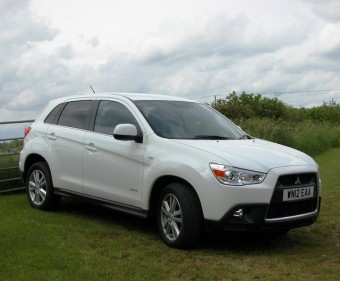 At that time it had Mitsubishi’s relatively new and clever 1.8-litre direct injection turbodiesel engine but with an industry first for diesel, variable valve timing was being used for lower CO2 emissions but with punchy for performance and very good for fuel economy. The power output was 147bhp and torque 221lb ft from 2,000rpm. Most important for that ASX 1.8 2WD review was the fact that although the official combined cycle fuel consumption Mitsubishi ASX in latest guise is greener was 51.5mpg, my week long test drive with the usual runs to airports plus local stop and start driving during a very cold January was a really impressive 58.9mpg.

However just as I was writing my review, into my e-mail Inbox popped a press release from Mitsubishi saying this engine was going to be even cleaner, greener and more fuel efficient from Spring production onwards.

The big issue for me was although CO2 emissions were dropping from 150g/km to 136g/km the power the engine produced to achieve this was being reduced to just 114bhp from 147bhp, although torque remained the same at 221 lb ft but it was being delivered from 1,750rpm instead of 2,000rpm

By down-powering of this unit it meant the engine had improved fuel economy achieving officially 54.3mpg from 51mpg. This resulted in a new VED road tax band going from Band F at £135 to Band E at £120. Benefit-in-Kind company car tax also reduced from 22 to 21 per cent.

There was also an increase in braked towing capacity from 1,100kg to 1,400kg.

In reality, now having just tried the new cleaner but lowered powered engine in the same 2WD configuration for the ASX, the loss in power is not really noticeable as the torque output from lower engine speeds masks that during acceleration and indeed the unit felt a bit more responsive during pick-up from lower to mid range acceleration.

To me that says the significant reduction of 33bhp means the latest engine has to work harder so in fact the fuel economy is worse in real-life driving conditions. That said for a substantial five door, five seater 2WD SUV/crossover, 52.3mpg is still impressive and better than the much more expensive Peugeot 3008 Diesel Hybrid which returned 48.6mpg for similar driving use.

Also the good news for potential Mitsubishi ASX owners is the competitive pricing and currently the company is offering a year’s free fuel on most of their new cars. The ASX range of two and four wheel drive models with the choice of 1.6-litre 115bhp petrol and 1.8-litre 114bhp turbodiesel engines, the on the road prices range from £16,674 to £26,070. 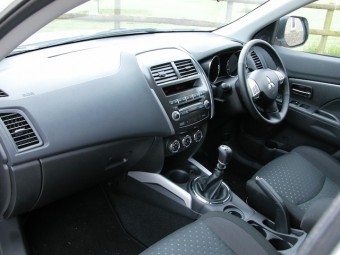 A wide price range and the petrol engine option results in the attractive starter price.

There are four trim and equipment levels as well, 2, 3, 4 and Black, depending on the engine of choice. On the downside there is no automatic transmission option and they are popular in this compact SUV/crossover sector.

As for sales, the ASX is Mitsubishi’s current best selling passenger car range with around 3,000 annual UK registrations, 56 per cent of them are diesel powered, 71 per cent are 2WD versions and level 3 specification is the most popular accounting for 43 per cent of sales.

So I can see why 44 per cent of ASX UK customers go for the petrol version and £2,241 buys a considerable amount of petrol and it will take years of private mileage driving to offset the cost of buying the diesel model. Such a big price difference between the new diesel engine and the petrol one is the biggest drawback to ownership. Having said that the ASX in any form is very competitive for pricing against all other mid-sized SUVs/crossovers.

Where the ASX also impresses is the interior space it offers. It sits in the Mitsubishi SUV range below the mid-sized Outlander (new model due shortly) and the heavyweight but old Shogun. It uses the Outlander’s platform so space is impressive with really good rear seat legroom and lots of load area space. 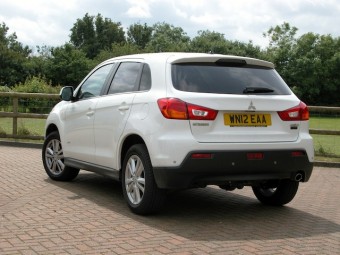 The rear seat backs fold down easily, not quite giving a totally flat load floor but near enough. It is an ideal family vehicle with space for child clutter to take pushchairs and the like. Couples young and old can carry activity gear, gardening purchases, the dog and even wheelchairs, all easily loaded over a low rear sill. Outside the ASX looks conservatively smart with its distinctive large grille, well sized windows and wide opening doors give easy access.

The ride comfort is very good and the 16-inch alloy wheels suit the platform and suspension design. It can be on the soft side on undulating roads but better that than a crashing ride over our poor roads and roadholding is well controlled. The seats are large and supportive and the front ones give good adjustment to meet individual requirements. Visibility is good front and rear and the parking sensors make driving life even easier. The only piece of driving technology missing to make it an ideal SUV vehicle for many people is the lack of an automatic transmission option. Good shape has practical side.