You are here: Home / Roadtests / Weekend roadtest: Lexus IS 300h

Britain’s executive car market is the envy of Europe and the latest Lexus IS 300h has been carefully pitched into the sector, and comes out very well.

Using proven hybrid technology from Lexus’s larger models, the 300h is the first hybrid in the IS series where they are counting on its mixture of petrol and electric power to give it tax and running costs advantage over diesel powered competitors.

Not only does it financially add up to plump for the Lexus IS300h over its German rivals, but it brings with it a higher rarity value and in the business world, unique selling points and exclusivity really count.

What’s more, you do not have to sacrifice anything to enjoy the Lexus IS300h. It is not difficult to start, drive or refuel. It demands nothing of a driver but delivers a lot.

The petrol-electric hybrid powertrain has a computer brain which decides which system works best or if they should work together.

You can silently move off under electric power, hear the petrol engine engage, or disengage in EV mode, and sometimes feel the benefits of both power systems if you need to accelerate hard.

With the continuously variable transmission working away there are no surges, lurches, rising engine notes or embarrassing crunching sounds from poor changes, just a steady flow of power to the back wheels.

A delightfully balanced power steering system imparts remarkable feel, agility and lack of vibration while the very powerful all disc brakes haul down speed with modest pedal effort and its parking brake holds it securely on steep hills but it’s foot operated which some drivers do not like.

The secondary controls are plentiful and do a multitude of things within fingertip reach of the wheel and need familiarisation while the instruments’ pod in direct line of sight ahead of the driver is large, comprehensive and beautifully lit at night. The display includes a multi-function panel for powertrain and economy performance and you can see at a glance how green is your journey.

Heating and ventilation controls are also straightforward and the system worked well to distribute desired air throughout the cabin in a very quiet and effective manner. Powered windows are quick and silent in operation to back it up. 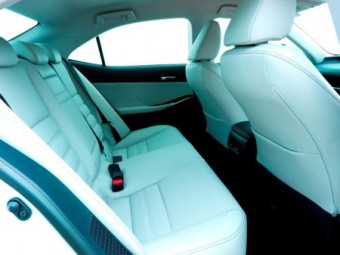 Oddments room is reasonable throughout but not particularly generous and the boot opening is small even if the capacity is good at 450 litres without a spare wheel and only a puncture kit, although this can also be a turn-off to some long distance drivers. The four doors open wide and access is good to the cabin. In the back the legroom is fairly good and it’s even better infront for taller users where the seats move through a good range of settings. I thought the seats were among the most comfortable I have ever used in a car, wrapping around thighs and back in a supportive and figure hugging manner while giving excellent location.

Our test car came with the light coloured leather option and its an expensive addition, but adds a lot to the ambience of the cabin, while the advanced satnav system needs a lot of getting use to if you want to fully exploit its abilities and deliver pin-prick precision in directions.

We covered a lot of miles in the week we had the IS300h and while many other writers have complained about the car’s ride on big wheels and tyres, our 245/45/R17 combination seemed very settled and smooth. Some severe bumps would be felt, but I think that would be the case with smaller rubberwear at each corner anyway. It was certainly a delight to drive long distances in one go.

If you were in a hurry on twisting roads, the IS300h really gripped well and its rear-wheel-drive nature was very predictable and enjoyable. Although this is primarily an executive saloon it behaved like it wanted to be a sports car. 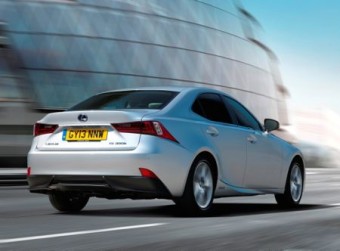 Over the mixed roads we covered I saw the fuel consumption work out at an average 46mpg but at times it approached 60mpg when cruising on the motorway at the legal limit, so it has enormous potential even if you will never attain the combined figure from unrealistic tests.

What makes it most enjoyable is the extremely low levels from all sources. In a bizarre twist you can actually select to hear engine compartment noise through a microphone switch on the fascia and it produces a wonderful roar under acceleration.

But that is not the only peculiarity of what is a car which sets itself apart from similar compact executives, because it comes with not one but two warranties, 3yr cover for mechanical items and 5yrs for the hybrid system.  So, two into one does go, perfectly in the case of the Lexus IS300h and it’s something else to envy.