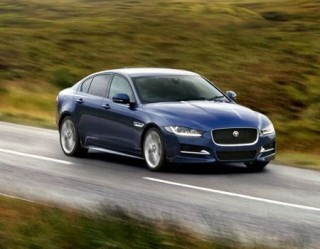 The unwritten law which states Germany’s dominance of the premium small executive saloon sector is unchallengable is about to be broken.

Pitching into the premium small executive sector, the four-door XE is up against long established rivals from Germany. It can beat them with 3,000 orders on the books in just a few weeks.

The brand is seen as making big cars driven by older people, mostly men, but that view is now going to change and there is a 50/ 50 split between retail and business sales nearly all are diesel.

Using the latest design and engineering techniques, the Jaguar XE is the first in class to be made almost entirely out of aluminium under the muscular body and as a result it’s the smallest, lightest and strongest Jaguar ever made.

Advanced low emission engines including the new Ingenium 2.0 diesel in 163PS and 180PS outputs alongside the 340PS 3.0V6 petrol feed power through 6speed manual or 8speed automatic transmission to the rear wheels, with its first use of electric steering, sophisticated independent suspension featuring ground-breaking All Surface Progress Control, selectable driving modes and a host of in-car technology for driver and passengers. 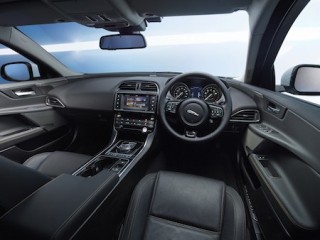 From the entry level XE Pure the new Jaguar range splits into two branches with Prestige and Portfolio luxury optimised models on one side and R-Sport and S derivatives powering the edgier side to its character.

The range spans the sector from £27,000 to £45,000 and Jaguar anticipates it will virtually double marque sales as it’s rolled out worldwide from July.

JLR product manager Dave Baker said, “The XE sets a new benchmark in style, efficiency and value. Its unmistakably a Jaguar from front to back and inside has our trademark Riva Hoop around the fascia, has the cleanest diesel engines and is the most economical when lined up against rivals.”

He said the Jaguar engineers wanted to maintain the philosophy of founder Sir William Lyons to create a car which felt alive in the driver’s hands.

Running costs are lower than competitors and Jaguar has been told by specialist assessors that the XE will also retain 44% of value after three years, also higher than most in this class. 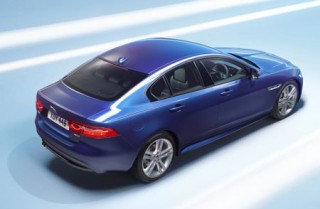 The Jaguar XE is going to be a success.

In a sector where familiarity breeds content, the new saloon from Jaguar will be a blast of fresh air among younger drivers who really crave to shine through the corporate clouds and show they have “arrived”.

We tested the perceived best selling XE Portfolio with higher output 180PS turbo-diesel engine which delivers 316 lbft of pulling power from 1750rpm. That gives it a 0-60mph time of 7.4sec in the 8sp auto tested and top speed of 142mph and we achieved a Jaguar cat’s whisker under 44mpg.

The new electric power steering gave very good feedback, had a good turning circle and was vibration-free while the proved 8sp box delivered seamless changes and kick-down was instant and strong.

The new Ingenium diesel engine is a smooth four-cylinder, particularly quiet when cruising if less so through the gears and its stop-start function was not as smooth as it could have been.

It is on twisting roads that you really can enjoy the Jaguar XE with its sharp responses to steering and brakes, the way it absorbs bumps and stays firmly on the tarmac with foolproof handling is confidence and smile creating.

Inside the room is ok for four, a squeeze for three on the back seat, and bigger people might want a larger front seat squab but it was comfortable with good adjustment. Visibility was very good with low waistline, deep windows and efficient wipers.

From rest it picked up smartly, there was good spread of power for overtaking and it was completely relaxed at the legal maximum.

Those who drove the previous generation X-Type will be very impressed by the XE sophistication and refinement, entirely in keeping with Jaguar’s larger models, and making it a very strong player in the corporate car park.