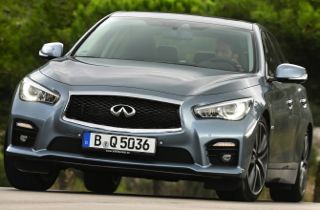 It is easy to see why the Infiniti Q50 stands out from the crowd.

In what was a record 2014 for the brand in Britain with sales almost doubling over 2013, the Q50 saloon led registrations. I am not surprised as it’s a particularly stunning car in its executive class.

The Infiniti Q50 range runs to eight models in four trim specifications including diesel, petrol and hybrid, with four-wheel-drive available only in the hybrid top model. Prices are from £27,950 to £41,640.

Our test model is the most popular, neatly slotting into the market with a host of rivals, but its British inspired design certainly sets it apart and often provoked questions from inquisitive drivers who wanted to know what it was.

The four-door saloon looks sleek and its 500 litres boot is reasonable  even if there is a high cill over which to lift items. Inside the access is good to front and back seats and they are well shaped and particularly supporting and comfortable infront for the driver and passenger, while room is also adequate. 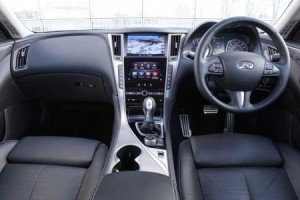 Major and minor controls are well laid out for access and use but their abundance and comprehensive operations require familiarisation.

Dials are big and clear infront of the driver while the optional multi-function central display for entertainment and navigation is sensibly sized and well lit.

Stalks for lights and wipers are partly hidden from view though the automatic paddles are better placed if you don’t want to rely on the selector lever on the transmission tunnel to move from normal to sport ratios.

The 2.0 litre seven-speed powertrain, only front wheel drive in this model but four-wheel-drive is available in the Hybrid, is particularly smooth and responsive, quiet and gives good acceleration, pulling power and cruising ability.

I was disappointed by the fuel consumption of 33mpg, a long way off the combined test-cell figure, and probably indicates how hard it works to move the 1.7 Tonnes car in everyday conditions.

You can tailor the steering weight to suit yourself but I found the light setting made it too twitchy even around town and a more feelsome setting is advisable along with weightier settings for the chassis responses which are also selectable. It is the first Infiniti to have steering by wire as there is no traditional steering shaft and this may explain the lack of usual feedback.

Brakes are very good, slowing it quickly and squarely from speed, and it held firm on a test hill we use and moved off again without slipping back thanks to auto-hold.

Once the chassis and steering was set up the handling was safe and roadholding was good, while the suspension coped with some bad surfaces without complaint but some noise indicated how it was absorbing the depressions and ridges. 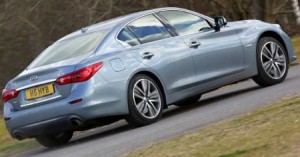 Apart from the road rumbles and suspension bump-thump, there was very little wind noise and mechanical sound only became noticeable at high revs through the intermediate gears.

The Infiniti Q50 Sport 2.0T is a very capable model which you can fine tune to taste as a comfortable long distance express or short-stage sportier model but the sophistication of the powertrain and chassis is not matched by its mediocre fuel consumption.