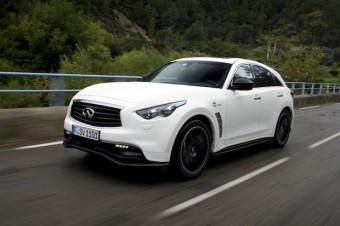 Very high performance sports utility vehicles are really few and far between, so an even more exclusive entrant is bound to turn heads when the Infiniti FX Vettel Edition hits the road in the UK early in 2013.

Originally conceived as a styling exercise to emphasise the Infiniti brand’s support of F1 Red Bull Racing, Vettel asked if it could be put into production and he has enthusiastically assisted with each stage of its creation from computer to circuit and road-testing.

Infiniti engineers worked with specialist engine tuners who are part of the Brabus group in Germany as well as Red Bull’s technicians and aerodynamacists who gave their input. The result is a lighter and lower FX than the standard 5.0V8, with 30ps additional output, tuned suspension, brakes and steering and a more luxurious interior with bespoke full leather and carbon fibre trim and decals. Only 150 will be built for global sale, including ten earmarked for the UK.

So what’s it like to drive? In one word, awesome.

You may anticipate a model developed with the help of a World Champion would be red in tooth and claw, whereas it brings a smile to the lips and raises the hairs on your neck with anticipation.

It fires up instantly with a deep burble, settles to a rumble at idle and roars as the throttle is depressed and you surge off. 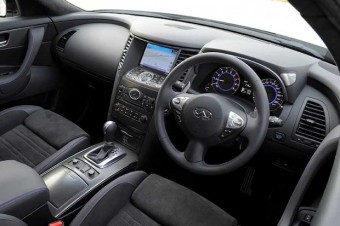 The FX Vettel Edition is surprisingly smooth through the auto-box whether going up or down gears, the steering is nicely weighted to give good feedback without being heavy and when you need them, the brakes quickly and effortlessly haul down speed. Test out the ride and handling over a variety of roads and the FX Vettel Edition copes with consummate control whether on motorway, quick A-roads or winding B-class lanes. You are never left wondering if it will grip, roll or pitch as it runs as if on rails around corners.

The ability to select normal or sport modes to firm up the suspension or soften it is a great feature on our surfaces and I think the column-mounted paddles will be loved by the fans of F1.

Secondary controls are well laid out, the temperature system works silently yet efficiently and there is a lot of space for occupants and their items with a boot stretching from 410 to over 1,300 litres.

Access is good into the front and back but once seated a driver quickly realizes the corners are out of sight and you rely on the sensors and parking camera to ease into tight spaces.

On the move again, the engine note is a delight to listen to as the throttle opens, there is some low road noise but hardly any wind noise and certainly no mechanical rumbles. 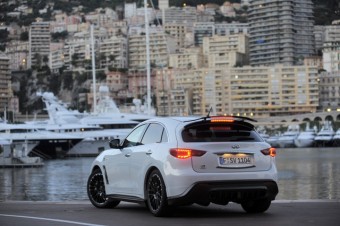 The FX Vettel Edition does everything you would expect of an Infiniti, but only much sooner and with even greater refinement and sophistication. It’s champion. Monaco, not Mumbles, if you were wondering

Against: High price with expensive insurance and running costs, high fuel consumption, corners out of sight.