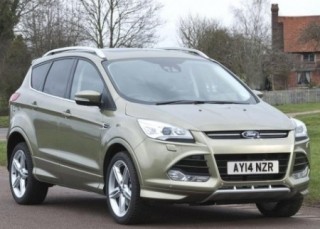 Kuga has been a tremendous success for Ford since it was launched, taking the family-focused brand into the sporting sector.

There are diesel and petrol versions and the latter now comes with the newest 1.5 EcoBoost engine built in Bridgend supplied in two power outputs, and we tested the lower version.

It replaced the 1.6 EcoBoost with a greener version 1498cc four-cylinder and matched to a six-speed manual gearbox in our test model.

You need to carefully think about how you are going to use the Kuga before selecting any of the four engines available as their performance characteristics vary a lot.

The Kuga package is a five-door, five-seater with higher than usual ground clearance and the availability of advanced traction control gives it a degree of four-wheel-drive grip although only the front wheels are actually powered.

Access is very good, the seats generous and electrically powered and leather covered infront on Titanium X specification. Combined with the adjustable height and reach column any driver can find an ideal position. 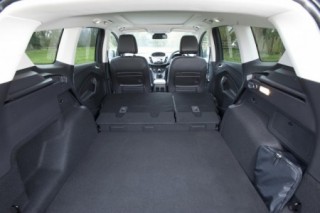 In the back, the leg, shoulder and headroom is very good, there are foldaway picnic trays and oddments can be swallowed up throughout the cabin.

Luggage capacity is a useful 406 to 1603 litres and the test car came with remote opening tailgate activated by a sweep of the foot under the bumper when the key was pocketed.

The driver gets a good instruments display directly infront with speedometer, tachometer and smaller gauges inbuilt for fuel and temperature and separated by a multi-function readout for trip, fuel use, tyre pressure etc.

The centre console carries the large screen for the infotainment system and includes sound system and climate settings as well as navigation and telephony and it’s very clear and intuitive.

Stalks on the column operate headlights and wipers, the wheel-spokes carry cruise control and secondary buttons for infotainment and essential data. It is all well thought out and easy to use. 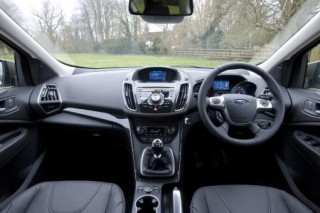 On the road you have good visibility all round and backed up by a reversing camera as part of the advanced sound system fitted to the test car for £750. The standard car does not come with any parking sensors, which is a major disadvantage, but the test car carried a £550 convenience package of park assist and sensors.

It handled well in tight spaces and at speed on main roads and the ride was fairly smooth and compliant over all but the worst surfaces.

Grip was good. Slowing and stopping was effortless and the test car also had active city stop to take some stress out of urban driving.

We covered just over 1,000 miles in it including a wide variety of roads and we could not get it above 34mpg, which is a long way off the official EU figure of 45mpg, so the 1.5 petrol Kuga may not be for you if you a lot of miles. It’s real-world fuel consumption would be an issue for some drivers. 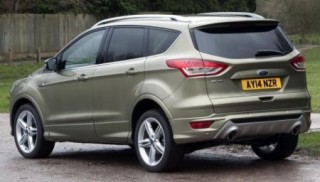 The engine’s thirst may be in part due to its gearbox ratios. The powertrain required frequent changes up and down and there was modest flexibility mid-range.  Using the indicated change-points meant frequent upchanges but often immediately followed by suggestions to downchange, so this Kuga seems obviously set up only to pass an EU test because it has to.

That said, the Kuga Titanium X 1.5 EcoBoost was comfortable and roomy, well equipped if you wanted to pay for the extras, and otherwise sophisticated and refined.