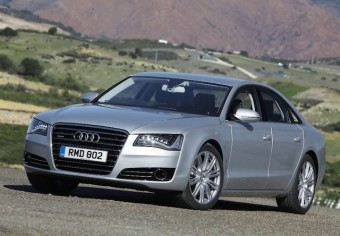 There are probably to vitally important dates in a parent’s life, the birth of their first child and the marriage of their first-born, especially if it’s a Dad writing this road test, and the wedding is his only child – and a daughter at that.

This has recently happened to me, my one and only daughter was getting married abroad, suddenly plans change due to no wedding date available in the chosen hotel in the Dominican Republic.

All change and quickly, wedding in the UK, a month to get it all sorted, venue, guest invitations, menus, flowers, outfits, transport – yes transport – now that is something I can do. Being a motoring journalist high on my to-do agenda was a suitable car for all the ‘Daddy taxi duties’. My own cars and the various other test cars due at the time were not big and perhaps not prestigious enough to serve my purpose.

Drive forward Audi UK and with their usual efficiency they spirited up an A8 3.0 TDI quattro SE Executive limousine, not their long wheelbase model but the standard length version which still looks impressive with huge road presence.

I always look upon long wheelbase models as the car for those who like to be chauffeured around. The standard length is for executives who like to drive themselves.

Now the A8 saloon isn’t exactly the latest new model in Audi’s fast growing range but it is the model that has spearheaded their introduction of aluminium construction, the use of high tech drivetrain technology with less CO2 emissions yet more power and better fuel economy plus electronic wizardry and on-board gizmos that have cascaded down to all other models in the Audi range from the A1 upwards.

Audi UK knows this and very astutely have worked hard and spent a lot of their Marketing and PR budget getting the A8 and their Audi brand a high profile with the right people.

This of course has led in part to their huge sales surge again last year with another all-time record of 113,797 registrations, a 14 per cent increase over 2010. Audi has a fleet of chauffeur driven A8s for VIP use and more often than not when a celebrity appears at a ‘red carpet’ event they will be getting out of, or in to, an A8.

VIPs obviously like what they see so no wonder the A8 and other Audi models seem to appeal to famous affluent buyers and by the ‘me too’ association to the wealthy but not so famous.

The A8 competes with main rivals such as the BMW 7 Series, Mercedes-Benz S-Class, Jaguar XJ, plus models from Bentley, Rolls Royce and others. It might be a small market segment but I have counted up 14 different model ranges that compete for UK sales in the luxury segment.

The Audi A8 Saloon range with standard and long wheelbase body options and with seating for up to five people all have quattro all wheel drive and automatic transmission as standard no matter what the choice of engine is. There are currently 3.0, 4.2 and 6.3-litre petrol engines and 3.0 and 4.2-litre TDI turbodiesel units. Prices start at £56,620 for the standard wheelbase model or £60,585 for the LWB versions and the current top 6.3-litre W12 version costs £95,120.

A high performance S8 4.0-litre TFSI 512bhp quattro version is to be added to the range and so is a hybrid model. My test version was the A8 3.0-litre TDI quattro SE Executive standard wheelbase version priced at £59,225. 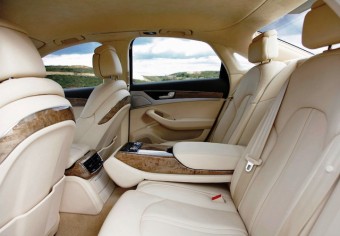 Limousines, also known as luxury cars, are by their very nature expensive vehicles but there is no shortage of buyers even in today’s economic climate.

Those with money will usually always have money and seem better cushioned to cope with a recession.

By far the most popular unit is the 247bhp 3.0-litre TDI diesel with its top speed limited to 155mph and zero to 62mph takes 6.1 seconds for the standard length version. The seamless eight-speed auto gearbox harnesses the ample 405lb ft of torque before it goes as required to the front and rear wheels through the quattro drive.

And this variable torque-split all wheel drive system with the A8 doesn’t dampen the performance or harm the fuel economy or CO2 emissions. Officially the A8 3.0-litre TDI quattro SE Executive version I tested will return 44.1mpg for the Combined Cycle and my rather short period of driving ferrying the Bride and other wedding guests showed a figure of 36.5mpg.

This was impressive given the non-sedate speed at which I had to drive to get all my driving duties completed on time. The CO2 emissions are a respectable 169g/km so the VED road tax is £275 for the First Year rate and then £195 for the second year onwards.

The Benefit-in-Kind costs are hardly going to trouble the executive business user-chooser drivers who make up the bulk of the A8 customers with this model incurring 27 per cent. Even the 43E insurance group rating is not going to deter executive ownership, neither is the boot space with 510-litres available for the golf clubs or designer luggage.

Of course the list of standard equipment is comprehensive, too much to list, but just assume it is all there and that includes climate control, leather upholstery, heated seats, supreme sound system with DAB radio, wi-fi connectivity, plus Bluetooth and cruise-control. Of course the interior is impeccable in styling and build quality. It is a glorious, comfortable place to be. My only niggles were the small gear select lever which was fiddly to use and the electronic parking brake.

The SE Executive level gains 19-inch wheels over the standard SE 18-inch versions and another neat addition is the electronic open/close function of the boot lid. In addition to the usual refinement the V6 diesel engine and eight-speed auto transmission offers, the test car had as standard the Adaptive Air suspension with four modes, auto, dynamic, comfort and lift. These are all self explanatory but the auto setting is best as the brain sorts out the ride comfort to suit the load, the roads and the balance and handling of the car at all speeds.

In addition there is Audi’s Drive Select where the owner, or chauffeur, can choose comfort, auto or dynamic – guess which one is best for most people? My experience with the A8 and other models in the Audi range is to just leave all settings in auto mode.

The A8 does everything for you apart from opening and closing the doors and steering.

And if it was allowed I’m sure braking would be an auto function as well although my test car did have the optional £2,045 night vision assistant with pedestrian detection.

The A8 is very clever, a great flagship, a showcase for Audi’s technology and image which cascades down to all lesser models in their range.

I guess if the Boss is happy and impressed with their executive A8 there is a chance their staff might find their way into other Audis as company or family cars.

Just look at Prince Charles and his family as an example.

For: Audi’s flagship luxury saloon, all the refinement, image, and technology you could wish to find, classy and comfortable interior.