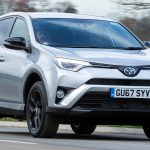 Global SUV sales rose 6% last year to a hit a staggering 60% over five years. Toyota dominated the sector with 2.35M registrations, Nissan recorded 2.24M and they were well ahead of a shrinking Honda holding 1.84M and falling due to the run-out of the CR-V.   Despite its expansion in the sector, Ford sold just under 1.6M some 3.5% down on the 2017 total. Hyundai recorded a near 19% … END_OF_DOCUMENT_TOKEN_TO_BE_REPLACED