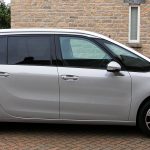 In the real world of practical motoring requirements are we losing our must-have desire for an SUV or Crossover type of vehicle?  New car sales suggest not but in the UK’s used car market a recent survey has found that the fastest selling used cars are roomier and more practical MPV people carriers. Driven by the UK’s better summer weather the growth in staycation holidays has risen, no doubt … END_OF_DOCUMENT_TOKEN_TO_BE_REPLACED

South Wales Central AM, Andrew RT Davies has called for the emissions protest in Cardiff to end. “Tackling climate change is a hugely important issue and one which the majority of the public is fully behind. However, the one sure way to lose hearts and minds in such a battle is to disrupt hardworking people on their morning commute, which is what’s happened in Cardiff today.” Insurance … END_OF_DOCUMENT_TOKEN_TO_BE_REPLACED