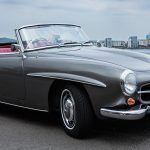 Mercedes-Benz World has selected a Hemmels of Cardiff restoration for display at its facility on the former Brooklands Racing Track site at Weybridge, Surrey. The motorcar, a 1957 Mercedes-Benz 190SL right-hand drive roadster, is prominently featured in the main reception area. The restoration was commissioned by a London-based private collector who chose to finish the car in Anthracite Grey … END_OF_DOCUMENT_TOKEN_TO_BE_REPLACED

Ten decades of motoring and 46 marques were covered in last weekend’s Historic Auctions at Mercedes-Benz World, Brooklands. Nearly 130 lots were knocked down for almost £4.6M, including £619,360 for a 1978 Aston Martin DB6 Volante while a 1973 MGB GTV8 reached £33,600. The All-New 2019 Mazda3 has been awarded the maximum five-star rating by Euro NCAP in its latest series of tests. … END_OF_DOCUMENT_TOKEN_TO_BE_REPLACED 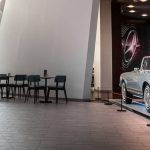 A remanufactured Mercedes-Benz sports car created in Wales is now taking pride of place in the German manufacturer’s leading UK centre. The hand-built 280SL sports car dates from 1968 and is owned by former racing driver Paul Rees who had it completely stripped, renovated, and rebuilt with a highly polished engine by Hemmels of Cardiff. The massive project took over 4,000 hours by a team of … END_OF_DOCUMENT_TOKEN_TO_BE_REPLACED