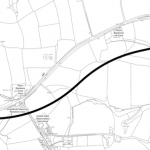 Welsh Government has decided on its preferred route for a £20M improvement to the A40 north of Narberth, Pembs.. Ken Skates, Welsh Government Economy and Transport Minister, has confirmed the preferred route for improvements between Penblewin Roundabout and Redstone Cross on the A40, with work starting next year and completed in 2021, The proposal – Option 2B – would be built at an estimated … END_OF_DOCUMENT_TOKEN_TO_BE_REPLACED

Four possible schemes to improve safety on the A40 north of Narberth have been unveiled by Welsh Government.  It has launched a consultation exercise with a public meeting in the town on 2 September before opinions close 20 September for overcoming the staggered cross-roads between Penblewin and Redstone Cross, which have resulted in serious accidents and was the subject of a HM Coroner’s … END_OF_DOCUMENT_TOKEN_TO_BE_REPLACED

The A40 will remain shut between Llandovery and Llanwrda over the weekend at least. It’s emergency closure follows the opening of a sink-hole in the carriageway on Wednesday evening and the diversions have caused chaos in surrounding villages struggling with HGVs on narrow sections.  Plans to scrap the proposed electric rail line between Cardiff and Swansea have been defended by UK Transport … END_OF_DOCUMENT_TOKEN_TO_BE_REPLACED

Welsh Department for Economy and Transport said 444 animals were found dead on Wales’ roads in 2016 and 2017. But further research by Confused.com suggests these figures could be even higher, as 40% of Welsh motorists admit they have hit an animal while driving. Some animals are more likely to fall victim to roads than others. In fact, badgers were the most killed animal over the last two … END_OF_DOCUMENT_TOKEN_TO_BE_REPLACED