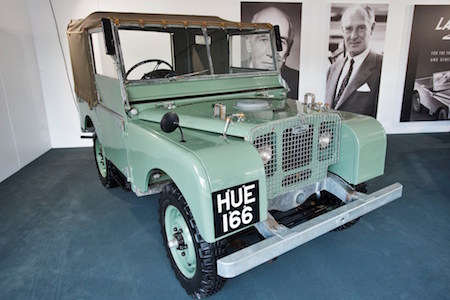 It will mark the seventieth anniversary of that legendary vehicle, the Land Rover. Entries already received for the show include early Series 1 Land Rovers of various types, an equally diverse number of the Series 2 models, and a wide cross section of the developed four wheel drive machines that are equally at home on mountain track or the school run.

The original Land Rover range broadened into Defender models, ranging from the Wolf, Defender 90 and 110 and CSW, and all are represented, as is one of the very last Defenders to roll off the production line.  The ‘upmarket’ section of Land Rover will also be on display, with a Range Rover P38 Special joining the de-luxe Vogue models, Discovery and the desirable Range Rover Sport and Velar model, plus a number of modified Freelander versions.

The original staid green of traditional Land Rovers has developed, and this seventieth celebration will be something of a rainbow, models of many colours set to attend. The Museum itself has a Land Rover 110 being restored, and two former Army  vehicles.

Representatives of Land Rover clubs across South and West Wales join the latest models brought along by Likes Land Rover of Hay on Wye who are supporting the show to bring the whole display up to date. The Museum welcomes owners of all kinds of Land Rovers to bring them along on the day and show just how diverse this iconic vehicle is and how many shapes and sizes it has evolved into over the years – no matter how new or old, muddy or shiny, true to the original or modified the vehicles are, everyone who turns up in a Land Rover-based vehicle will be allowed free entry to the indoor and outdoor display areas.

There will be a number of stands and stalls, refreshments and other displays, including some of the museum’s collection of buses that once served the area and other classic and vintage vehicles.

Museum chairman Alan West said, “The vehicle is such a legend we feel justified as a transport museum in saluting the part it played in the development of 4X4 vehicles, as a Welsh transport wonder, initially developed in North Wales .

“It would be a delight if we get 70 Land Rover vehicles to the museum for a rousing salute to the brand and those who help keep the earlier vehicles running.”

Owners that turn up on the day are welcome but the site will be closed to traffic at 9.45am for safety reasons. Public admission is from 10.30am to 3.30am. Entry is £3 per adult £1 per child.

For further details contact the museum secretary, David Roberts, on 01792 732832 or e-mail secretary@sbm.wales