The RAV4 mid-sized SUV was first introduced in 1994 and billed by Toyota as the first compact 4WD SUV.

Since then there has been a continual supply of new and updated models and the latest major change is the introduction of petrol electric Hybrid two and four wheel drive versions.

With the Hybrid’s 2.5-litre VVT-i variable valve timing petrol engine plus an electric motor for the 2WD version and additional rear mounted electric motor for 4WD models, but with no PHEV plug-in electric charging facility which really brings down CO2 emissions, it caused me to wonder just how these latest RAV4 petrol/electric Hybrid versions would appeal over other petrol or diesel variants.

Well in the UK Hybrid RAV4s have proved to be more popular with higher sales than petrol and diesel versions.   Last year 4,544 petrol/diesel RAV4s were sold versus 4,682 Hybrids. Of the Hybrid sales it would not be uneducated to assume that most of these went to fleet and business user chooser customers because of the lower CO2 emission figures which mean lower taxes.

In fact there was a more or less even split between demand from retail and fleet customers. For conventional RAV4 petrol/diesel model sales to retail customers are significantly more than fleet users. Another surprising fact, given the vehicle’s reputation as a workhorse 4WD SUV, in the UK almost 60% of modern day RAV4 sales are for 2WD models.

Toyota GB says it follows the trend of owners wanting the SUV type vehicle in terms of size and height but without the higher running costs associated with 4WD.

So times are changing in today’s motoring world, never assume anything now when it comes to the public’s choice of what to buy. Diesel models, given this shift in buying patterns, are now only available with front wheel drive and only with a manual gearbox with prices starting from £24,205 for the base spec Active version, indeed it is the only engine choice for this spec level. 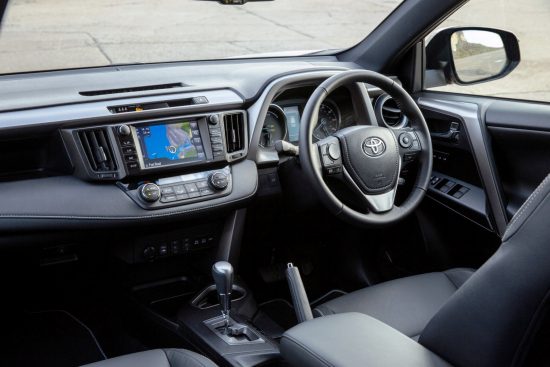 Moving up to Business Edition/ Business Edition Plus levels the diesel manual 2WD prices start from £26,730/£27,430 compared with the 2.5-litre petrol/electric Hybrid automatic 2WD (the only gearbox choice) costing £28,530. Above these versions are Icon and Excel spec levels with the manual gearbox 2WD diesel being the least expensive at £29,600.

My latest RAV4 experience was the 2.5 petrol/electric Hybrid auto with 2WD and with Business Edition Plus specification priced at £28,530.   With today’s UK customers buying more Hybrids than petrol or diesel models and more 2WD than 4WD versions this seemed the likely best selling version.

Officially the Combined Cycle fuel economy is 57.6mpg and on my week long test drive the vehicle returned a poor overall figure of 42.3mpg driven mostly in Eco mode. It also has a selectable EV mode where the electric motor only drives the vehicle with a range of about one mile.

Unfortunately there is no plug-in mains electric charging facility which would extend that range much further. More appealing for most customers is the low CO2 emission figure of 115g/km so VED is £0 for the First Year rate and currently £30 for Year Two onwards.

Styling wise the mid-sized RAV4 retains its robust SUV styling although slightly softened by curved styling lines more in keeping with the styling of popular ‘soft’ SUVs commonly known now as Crossovers. It has a slightly rising waistline and a prominent roof rear spoiler to give it a more athletic look but retains its black plastic protective mouldings around the wheelarches and along the sills. All new RAV4s, but the base Active model, now have Toyota’s Safety Sense system with pre-collision braking, adaptive cruise control, lane keep assist, automatic high beam headlights, road sign assist, traction control, stability control and hill start assist.

Within its overall length of 4,605mm inside there is ample room for five passengers with a boot capacity of 501-litres expanding up to 1,633-litres with the split rear seats backs folded down. With no under floor battery pack, or electric motor for 4WD versions, non-Hybrid models have a boot space of 547-litres going up to a maximum of 1,735-litres.

Rather than use the Toyota Hybrid Synergy Drive system with its 1.8-litre petrol engine and electric motor for models such as the Prius and new C-HR smaller SUV, the RAV4 Hybrid has the 2.5-litre Hybrid system as used in the Lexus NX Crossover and GS Saloon ranges. It is simple to use, get in, push the start button, engage Drive, release the handbrake, press the accelerator and off you go, almost always in quiet electric drive mode but only for a few metres before the petrol engine chimes in.

Around town the petrol/electric Hybrid gives decent driving performance but during acceleration on the open road it doesn’t feel as responsive as the acceleration figure suggests and it can be hard-pushed to maintain effortless high speeds on motorways. Use more than part-throttle with the CVT gearbox and the engine revs soar noisily without much gain in speed. And it’s the same going up a steep hill, lots of noise but little ‘grunt’.

It is not as sharp in the handling department as the petrol or diesel models feeling less agile because of its near 1.8-tonne kerb weight. The vehicle is unsettled with impacts from potholes, the ride isn’t that compliant and the steering is vague offering little feedback.

It does have its plus points -low emission levels, potentially reasonable fuel economy and comprehensive specification – but it’s too compromised in other important areas to make it the most recommendable RAV4 model in the range.

That said it has proved popular as its sales figures show. Outright performance, 4WD traction and driving refinement are no longer driving forces when it comes to buying an SUV, lower taxation and running costs and high spec are it seems.

Against: Not as good to drive as conventional petrol/diesel versions, less real-life fuel economy than a diesel version, no plug-in electric facility which reduces CO2 emissions and increases the EV driving ran plus most PHEVs get the Government’s plug-in vehicle grant, 2WD Hybrid models have a poor braked towing weight, hard to justify the extra purchase cost over a diesel 2WD model.