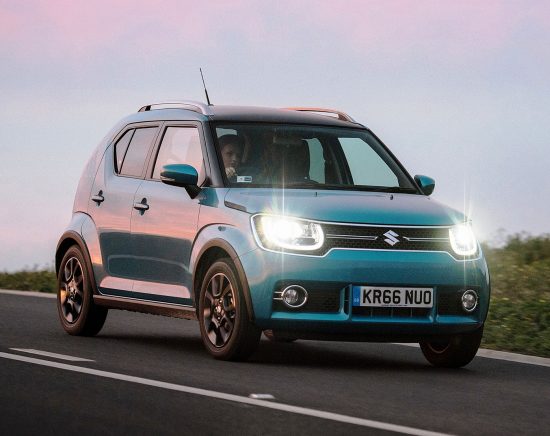 Is it a City Car competing with the likes of the Fiat 500, Hyundai i10 or the new Ford Ka+ or is it a small SUV like the Fiat Panda 4×4 or the Fiat 500X or the Renault Captur, ponders David Miles.

Actually the all-new, high-stance Suzuki Ignis is a bit of both as some versions are front wheel drive and another version offers Allgrip 4×4 traction.

All major manufacturers seem to offer small, medium and large SUVs/Crossovers but the Ignis takes the trend even further.

With its five door City Car size of 3.7m length and 1.7m width, but with its high stance with extra ground clearance and its chunky design with flared wheelarches robust bumpers short clamshell bonnet and blunt nose, it looks more SUV – right in fashion and with appealing prices starting from just £9,999.

Suzuki GB expect to sell around 6,000 of them in the UK this year, given the competition in a fast growing market sector that is no small ambition. All versions are powered by a 1.2-litre, Dualjet four cylinder 89bhp petrol engine and most have 2WD through SZ3 and the best selling SZ-T specification levels. At the top of the range are the SZ5 2WD and also the 4WD Allgrip version with on demand 4×4 traction plus Hill Descent Control for venturing off-road and this version costs £13,999. There is an £800 auto transmission option for 2WD SZ-T and SZ5 versions.

The engine in the SZ5 model also has SHVS (Smart Hybrid Vehicle by Suzuki). This mild hybrid system utilizes a starter generator motor which as its name suggests acts as a generator and starter motor which assists with power during acceleration and generates electricity during braking recharging the lithium-ion battery and conventional 12-volt battery.

In harmony with the attractive low purchase price running costs will be relatively low. Depending on the variant chosen the Combined Cycle official fuel economy ranges from 65.7 to 60.1mpg and CO2 emissions range from 97 to 106g/km. This means all versions are at the time of writing free of VED road tax for the First Year rate and either zero cost for the 2WD SZ5 with SHVS hybrid support or just £20 for the Year Two onwards rate. Insurance rates are Group 15E to 18E.

The lower spec versions only have a Euro NCAP three star safety rating but the top spec model gets five stars. However Suzuki will offer a safety pack which will improve the safety rating of the SZ3 and SZ-T variants

The elevated seating position provides good visibility and its compact length, light steering makes it an easy car to drive in its City Car environment. Generally the controls are well laid out although some are partially hidden such as on the Allgrip variant I tried where the 4WD select and descent control switches were low down under the centre console. 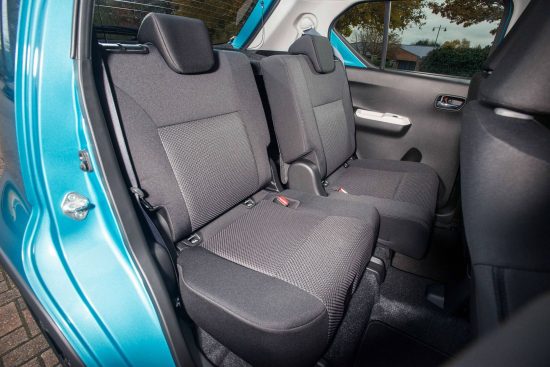 The plastic trim highlights its budget price, durable no doubt but a bit low-rent. Entry into the rear seats is good and the variable sliding seat on my test car would be useful for family use and there is 204-litre boot on the Allgrip versions but more at 260 to 267-litres on 2WD and lesser spec versions.

With the rear seat backs folded this space grows to a maximum 1,096 or 1,100-litres depending on the model. Access to the boot is easy through the wide tailgate but there is a high rear sill to lift luggage over.

I tested the top spec SZ5 variant with Allgrip 4WD and on the open road the steering weight was inconsistent and slow to react. Being tall there was considerable body roll during cornering and the short wheelbase made the ride ‘choppy’ over country roads. On main roads the ride was better but impacts from potholes unsettled the car. With its low weight it did feel agile with reasonable grip but there was no getting away from the fact that this is a City Car designed for urban and local motoring rather than long journeys.

On motorways there was significant buffeting from larger faster traffic passing me and my test car felt much happier cruising at 60mph rather than the legal maximum speed.   That also provided better fuel economy. Cruising at 60mph and the figure was 55.7mpg over a long journey. Increasing cruising speed to 70mph and the figure dropped to 49.1mpg. With some town and local country driving miles thrown in the overall average for my week of Ignis driving was still a commendable 53.2mpg for a petrol powered car.

Top speed for the £13,999 Suzuki Ignis SZ5 Allgrip model is 106mph and zero to 62mph takes a modest 11.4-seconds. With its 120Nm of torque at 4,400rpm, despite that relatively high engine speed figure, the response and flexibility from the engine was impressive thanks to sensible gear ratios. Driving at the usual commuting 30 to 50mph speeds, or covering winding country lanes, didn’t require lots of down-changing of gears to keep the car moving along effortlessly. Only driving at higher motorway speeds was harder work.

Although the Ignis with its cheeky modern Crossover styling and five doors should appeal to those needing a compact but in-vogue Crossover styled car for the school run it will also appeal to those young-at-heart empty nesters for their day-to-day motoring needs. It should also become an option for rural dwellers especially those that come from the farming community and need a useful cost-effective second car for family duties.

Of course, it’s not a full-blooded mud-plugger but away from tarmac roads in the rough it is impressive for its size.