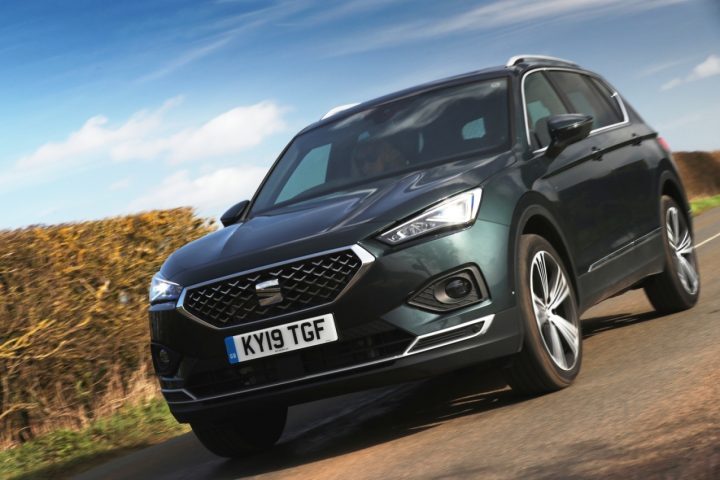 The new SEAT Tarraco represents the voice of the people, writes David Miles.

The new 7-seat large SUV is named after the Mediterranean city of Tarragona and was chosen by 140,000 on-line enthusiasts.

Priced from £28,335 to £38,055 the Tarraco range joins the SEAT Spanish arm of the VW Group’s other SUVs – the compact Arona and the very highly rated and award winning Ateca mid-sized SUV – both these models being five doors, five seat offerings.

But the Tarraco is aimed at those who want even more space, more seating or load carrying combination options so it can also compete with now less popular MPV people carriers. We know SUV styling is the driving force behind new cars sales.

Depending on the spec chosen there is the choice of two direct injection turbocharged petrol engines – 1.5 TSI Evo 150hp manual 2WD and the 2.0 TSI 190hp with standard fit DSG auto gearbox and 4Drive 4WD. 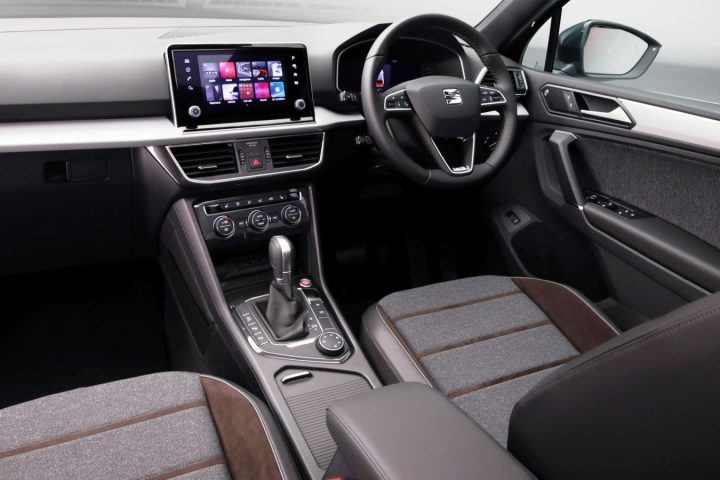 Spec levels are SE, SE Technology, Xcellence and Xcellence Lux and of course personalisation options. Further spec levels of FR and FR Sport are scheduled and a plug-in hybrid powertrain will also be added next year.

All spec levels have a 10.25-inch digital cockpit and 8.0-inch floating central display screen and importantly the heating and ventilation controls are separate and so not operated via the touchscreen. Standard equipment includes Front assist, Lane Assist and Emergency Call. Such items as Park Assist, an Electric Tailgate with virtual pedal which allows the foot to be waved under the rear bumper to open the tailgate and a top view camera system are amongst the convenience items available.

Also included are the now commonplace connectivity functions so overall it’s a well specced, practical and well equipped vehicle at whatever level of equipment is chosen. However you need to pay an extra £110 if you want a space-saver spare wheel rather than the tyre repair kit, a must have I feel for most people. If you need a towbar with electrics that adds £685 to the price and a panoramic sunroof adds a further £960.

Its competitor models are fairly numerous these days even in this large size SUV segment and its closest rival also comes from the VW Group of brands; it’s the highly rated Skoda Kodiaq but that offers five and seven seat models, with the same engine and drivetrain choices at similar prices. Probably the deciding factor on whether to buy a SEAT Tarraco or a Skoda Kodiaq will be down to whichever dealership is most convenient and which offers the best transaction price or finance deal.

Designed and developed by SEAT in Spain, but manufactured at the VW Group’s Wolfsburg Plant in Germany, the Tarraco SUV is 4,735mm long, 1,839mm wide and 1,674mm tall – creating a huge interior space and an imposing robust exterior image. At the front is a prominent grille design flanked by full LED headlights retaining the company’s triangular signature.

The LED lighting also allows for dynamic rear indicators which have become popular with many new cars. The wide and full height tailgate gives easy access to a flat load floor with no high sill to load items over and into the vehicle. Overall the Tarraco has a more conservative visual appearance than some of its ‘blinged-up’ rivals. 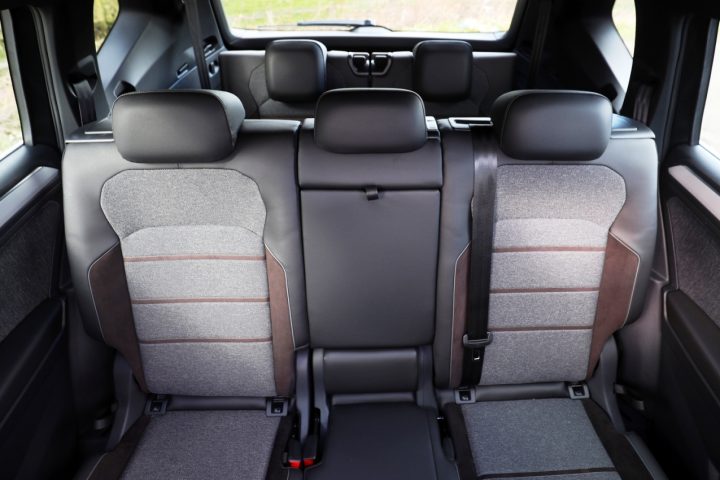 Inside it’s much the same story with all the controls well laid out, most of the specification most commonly needed and with reasonable amounts of soft-touch trim. However there is an equal measure of harder plastic trim as well. It’s all very clean and clinical in its interior styling but perhaps a bit bland.

The Tarraco is mainly about interior space. With all three rows of seats in use there is a small 230-litres boot, fold down the third row of two rear individual seats and this increases to 700-litres and with the second and third rows of seats folded down the load space increases to a cavernous 1,775-litres.

My test drive model had the popular 2.0-litre TDI 150hp turbodiesel engine, 6-speed manual gearbox and with 2WD.  A rotary dial allows various driving models from Eco to Individual to be chosen at will. This model with the Xcellence spec level I tried costs £31,900. 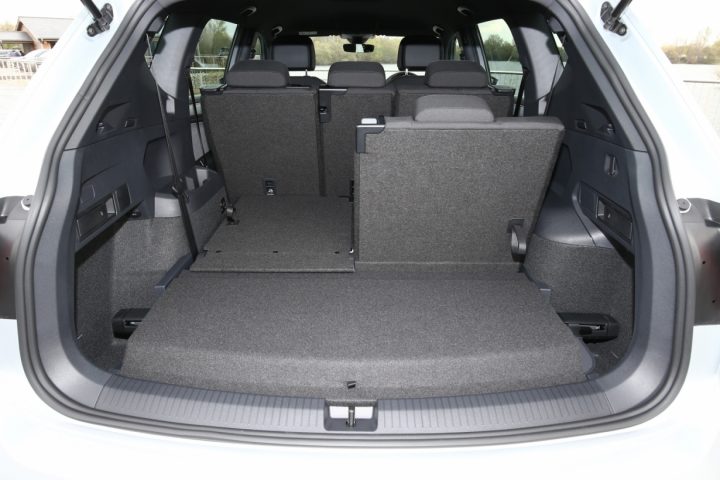 The engine we know well from other SEAT and most other VW Group brands. It’s a strong workmanlike performer with 340Nm of torque from 1,750rpm and it works well with the 6-speed manual gearbox. For preference I’d find the extra refinement and ease of driving

worthy of choosing the 7-speed DSG automatic gearbox. But that comes with 4Drive 4WD traction and pushes the price up to £36,815 which might be a step too far for some owners particularly as it increases the running, insurance and tax costs.

As for performance the top speed of my manual gearbox model was more or less matched by the auto gearbox model.

The handling for such a large and elevated vehicle was good, sharp front end steering response, accurate feedback through the steering wheel and it was generally composed and well-balance. However the larger 19-inch wheels didn’t help with ride comfort on country roads where impacts from potholes were well and truly felt inside the cabin. I also noted there was significant wind noise at higher cruising speeds from the door mounted mirrors. 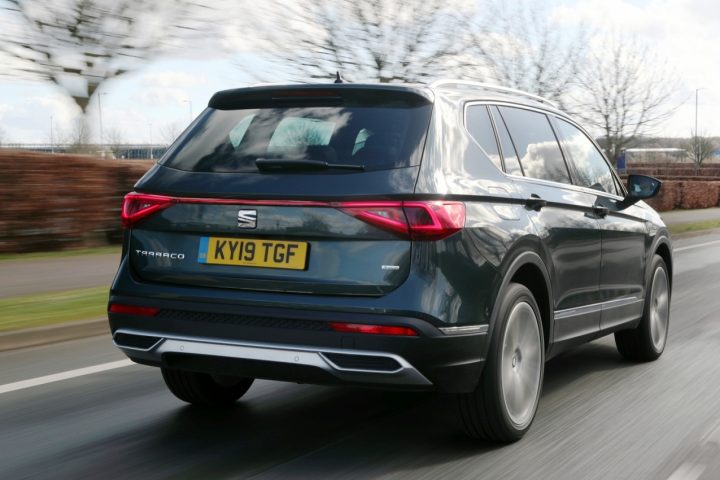 The new SEAT Tarraco 7-seat large SUV in whatever spec will fit the bill for most who want fashionable SUV styling, need to carry up to seven, or less people and lots of load space. It doesn’t obviously stand out from similar models in a crowded market but neither does it not measure up to what it was designed to do.

The deciding factors for customers will be convenience of a SEAT dealership and the actual haggled price or most attractive PCP finance deal. If the best deal turns out to be a Tarraco over any of its competitors you won’t be losing out.