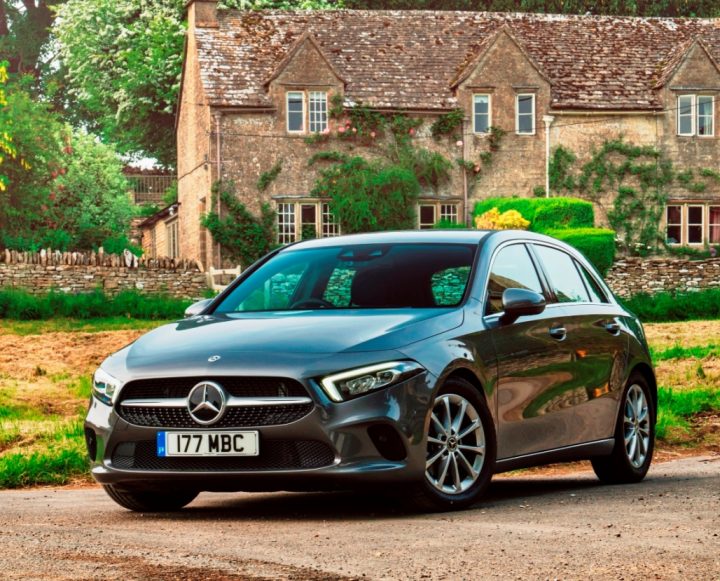 The UK is the largest global market for the Mercedes-Benz A-Class range of five door hatchbacks and four door saloons with over 340,000 sold since the first generation arrived in 1997, writes David Miles.

Last year a record 43,527 of them were sold in the UK making it the UK’s eighth best selling model range and this year it has moved up the top ten sales chart to fourth position.  Competitor premium brand models are the BMW 1 Series and Audi A3, neither of which feature in the top ten sales chart.  The Mercedes-Benz brand in the last two years has moved to become the best selling German premium brand in the UK. Last year they sold 172,238 new cars here driven by demand for A-Class and C-Class ranges, the majority going to business user-chooser and fleet customers.

A-Class Hatchback prices start from £26,025 and rise to £35,580 through 20 derivatives. The lesser popular four door saloon models with six derivatives are priced from £28,120 to £31,760.   To meet the demands of the many rungs on the company car ladder there is a comprehensive array of engine choices, spec levels and of course extra cost option packs.

The core specification levels for hatchbacks, depending on diesel engine choice, are SE, Sport and AMG Line and petrol are AMG Line and the full-blown AMG A 35. 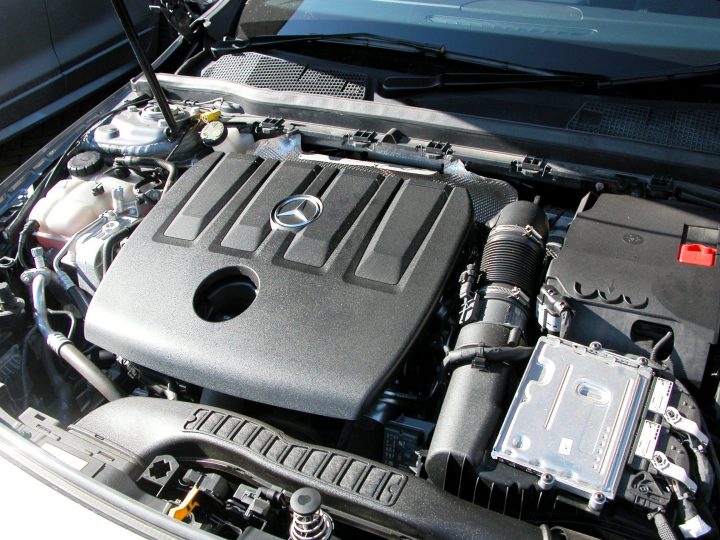 Mercedes-Benz UK indicates that 335,000 A-Classes have been sold in the UK since the first generation was introduced in 1997. The AMG Line spec level is the most popular accounting for almost half of UK sales, 55% of customers order a model with an automatic transmission, 70% sold are diesel powered models and the UK is the largest global market for A-Class sales.

Whereas the first generation ‘Baby Merc’ A-Class  was a tall, narrow track, short coupled hatchback, which initially had dubious handling qualities until an electronic stability programme was added, the progression of generations has seen the model to better styled, better balanced and roomier. Now again the progression continues and now includes the latest technologies in terms of safety, driving support, MBUX (Mercedes-Benz User Experience) connectivity and even elements ready for semi autonomous driving.

The new version is larger again at 4,419mm in length, an increase of 120mm. It’s wider, taller with a 30mm longer wheelbase, larger boot/load area but its 20kg lighter. All versions have a McPherson strut front suspension with the A180d and A 200 having the cheaper torsion beam rear system, whilst more powerful and expensive versions have the more sophisticated and better handling and ride comfort four-link system. Even standard models have a 15mm lowered ‘comfort’ suspension but it still has springs and dampers configured for sportier handling characteristics.

In common with many brands offering models of different sizes there is a continuity of design from front to rear of their small medium, large and sporting saloons, hatchbacks and estates.  The A-Class is no different. It has the latest Mercedes front face with the iconic three pointed star centrally positioned in the wide and grille.  The frontal image is strong, it’s distinctive and you just know at a glance it’s a Mercedes. 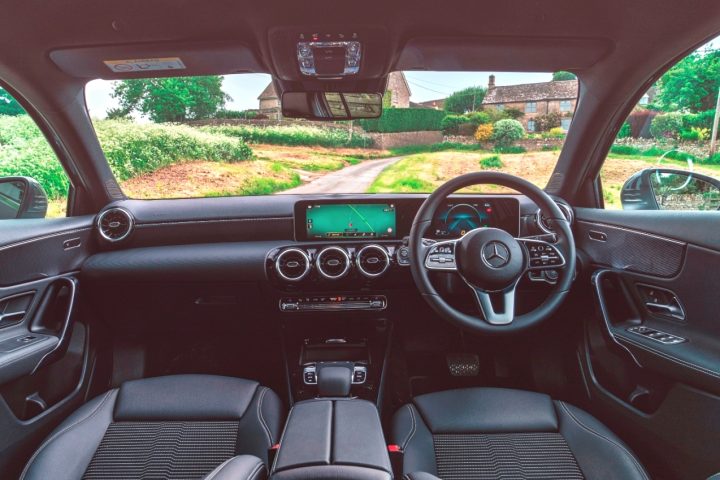 With its lowered suspension the body from any angle looks ‘well planted’ giving the A-Class a sporting look whatever engine is under the bonnet and whatever spec level it might be. It portrays the image for an owner that ‘I drive a Merc’ which for the bragging rights in the company car sector is important.

I have just had a spell in one of the more lowly variants of the A-Class range – the five door Hatchback 180d turbodiesel with its standard 7-speed automatic transmission with Sport specification – the likely starting level for a youthful company car driver. The on-the-road price is £27,565 and with those all important diesel lower CO2 emissions the Benefit-in-Kind tax rate 27% but as an early warning all BiK tax rates change from 1 April and this model goes up to 30%. Writing about costs, the CO2 111g/km figure for this engine means VED First Year diesel rate road tax currently costs £205 and then £140 Standard rate. From April that changes to £170 First Year rate and then £145 Standard rate.

The 180d model has a 1.5-litre, 4-cylinder turbodiesel 116bhp engine. The core unit is sourced from Renault-Nissan but Mercedes add their ECU electronics to harmonise it with their performance requirements. This unit develops 260Nm of torque from 1,750rpm and drive to the front wheels is through a 7-speed twin clutch auto gearbox. 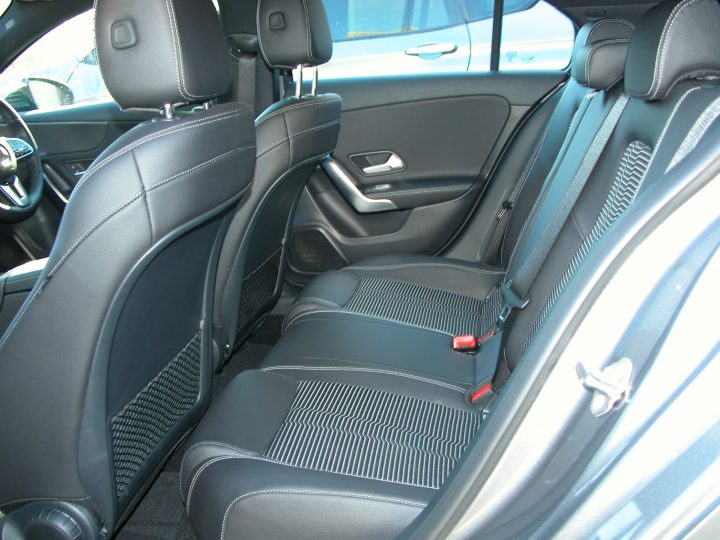 Performance wise this unit, although relatively smooth and quiet, isn’t exactly going to  ‘cut-the-mustard’ when it comes to company execs bragging rights given it’s a Merc – even a small one. Acceleration is modest, but it’s frugal with the new combined official WLTP figure of 61.4mpg and my week-long test saw 51.7mpg.

The combination of good torque and the 7-speed smooth changing auto gearbox with its manual sequential mode actually work well. The fully auto mode works smoothly and is ideal given our traffic congested roads and the manual sequential shift mode will add sparkle for open road driving. I wasn’t so keen on the stalk style gear selector being mounted on the steering column.  So whether it’s high mileage users on their daily work travels or an older empty-nester out for a shopping trip or off on holiday, it will fit for purpose, functional rather than fun but motoring in some style.

Ride comfort is generally good despite the lowered suspension but the torsion beam rear axle and 17-inch alloy wheels do provide a fidgety ride over poorer tarmac surfaces and ridges in the motorway surfaces caused by heavy lorries can provide at times rear end steering as the wheels try to follow the tracks rather than the car’s front wheel drive intended line. Front end grip and accurate steering lines are good in keeping with its Sport spec classification. Overall it’s a well balanced car – not an exciting one, but it’s a starting point Mercedes. 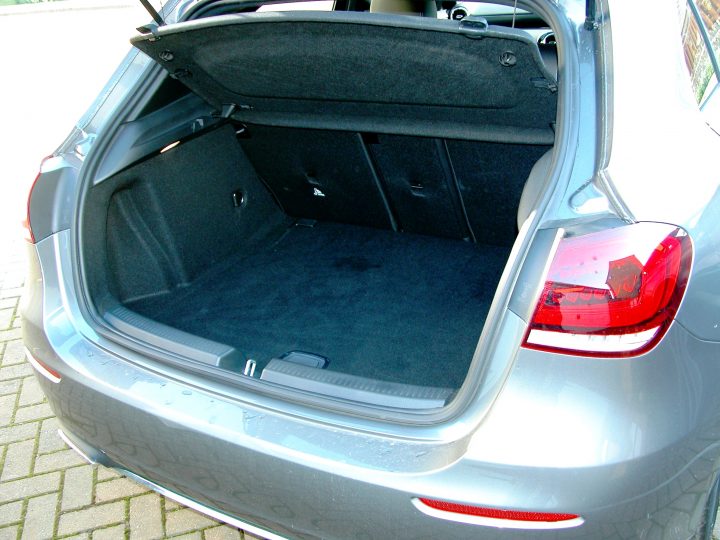 What the Sport spec adds is 17-inch wheels, LED performance headlights, Artico man-made leather and fabric upholstery, dark carbon fibre effect trim, sat-nav and two zone air con. It is very ‘switch heavy’ unlike many competitors which have gone the ‘minimalistic’ route with their controls.

It was good to have separate heating and ventilation controls but some of the other switches were small in size and fiddly to use. It took a while to familiarise myself with the multitude of buttons and controls especially those on the steering wheel. 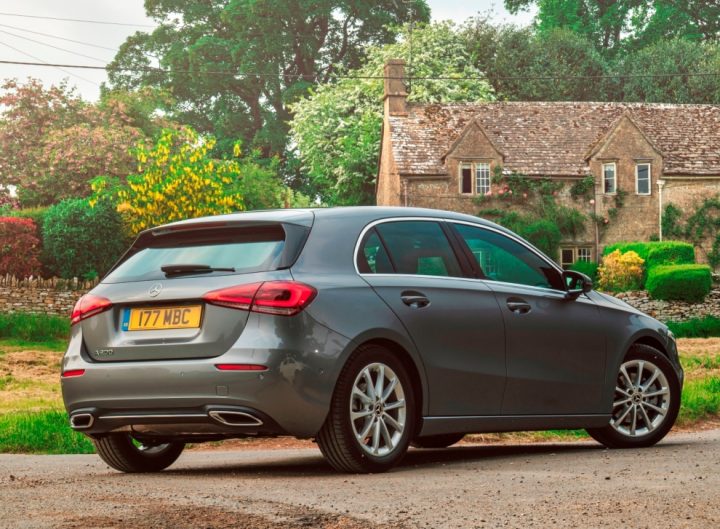 That said the interior of the A-Class Sport spec test car was generally a nice place to be, it has all the styling hallmarks of larger and posher Mercedes models although the manmade leather didn’t feel a premium brand product.  But as I’ve already written it’s a starting point Mercedes.

For: Classy premium brand ownership proposition, good looks with desirable kerb appeal, high levels of technology either as standard or via extra cost options, huge range of models to choose from, pleasant to drive