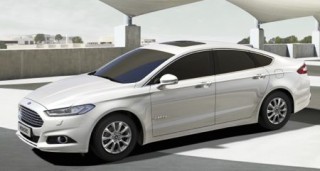 The all-new Ford Mondeo range is huge in the number of models with the price list showed 56 versions with prices starting at £21,095 and ranging up to £33,310.

Core versions are either five door hatchbacks or estates with Style, Zetec, Titanium and Titanium X levels of spec depending on the engine chosen and there again there are numerous options from 1.0-litre petrol to 2.0-litre turbodiesel. The ’posh’ Vignale versions are four door saloon or five door estates with 2.0-litre petrol and diesel engine options.

But embedded within the ranges are two petrol/electric hybrid automatic transmission, four door saloons – the Mondeo Titanium at £25,295 and the Mondeo Vignale at £29,715.  With the USA being Ford’s core market for petrol/electric hybrids rather than diesel versions and with their preference for saloons over hatchbacks, under the global ‘One Ford’ manufacturing policy the UK gets the hybrid Mondeos as saloons which are built in Spain.

Pricing is similar to the Mondeo diesel automatic five door models and with fuel economy of 67.3mpg in the Combined Cycle and CO2 emissions of 99g/km Benefit-in-Kind is only 14% which is cheaper than diesel powered models.

All Mondeos are primarily a fleet and business car so the petrol/hybrid version, although it is in the less popular four door saloon, is an interesting alternative. This is especially so with the on-going concerns regarding NOx pollution from all manufacturer’s turbodiesel models despite them meeting EU6 regulations.

Those users finding the Prius a bit cramped and a bit quirky in the styling department should consider moving up to the Mondeo Hybrid. Although it being a saloon with a smallish 383-litre boot due to the intrusion of the battery pack and electric motors, users might not find the load space enough for their ‘green taxi/private hire’ business. 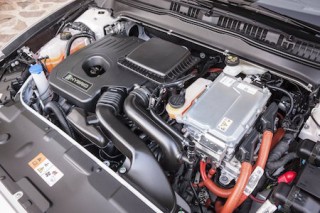 The Mondeo range overall sells alongside the Vauxhall Insignia, Toyota Avensis, Mazda 6, Skoda Octavia and the VW Passat. The up-market Mondeo Vignale models are aimed at competing with premium brand models in the D-segment led by the BMW 5-Series, Audi A6 and Mercedes-Benz E-Class.

The Mondeo Hybrid has a 2.0-litre petrol engine and two electric motors – one to support and limit the load on the petrol unit and second is a generator charging its lithium-ion battery.

Officially this petrol/electric power unit combination will return 100.9mpg in the Urban Cycle, the place it is most efficient in, but in the Combined Cycle it officially returns 67.3mpg – well into turbodiesel territory.  In real life motoring conditions my 900 mile test driving spell over a week returned an impressive 52.6mpg overall average. My motoring included several fast cruising runs on motorways and dual carriageways plus the now commonplace congested stop-start in town commuter traffic.

Top speed is a modest 116mph but it will cruise happily and quietly at the legal maximum speed and the zero to 62mph acceleration time is also modest at 9.2-seconds. This is due in part to the slow acting CVT transmission which also raises the noise level of the petrol engine during mid-range acceleration.  The changeover between electric and petrol power is seamless so once at cruising speeds the Mondeo Hybrid is a very relaxed long-distance, comfortable and roomy car.

However hybrids tend to be most efficient in terms of fuel economy in town and the official Urban Cycle 100.9mpg reflects that.  With lots of stop-starts the electric power drives the car along at crawling pace without support from the engine and during braking the battery is topped up as well.  It can drive on electric power only at up to 85mph and gentle use of the throttle on motorways regularly allows the petrol engine to switch off so saving more fuel.

The more I drive cars with hybrid elements the more I have become convinced that hybrid technology is, for the next few years, the way forward to improve fuel economy and to lower exhaust emissions. We use energy to drive cars along, but in doing so the car creates energy which the hybrid components can harness as electric power to then assist the petrol or diesel engines. To me it makes sense and after my week long, high mileage experience with the Mondeo Hybrid, plus others hybrid models in recent years, I miss hybrid input when driving more conventionally powered models.

Hybrid power can be used to boost outright performance from small capacity engines as in F1 or hybrid technology can make larger engines more fuel and emission efficient. The only element that some hybrids miss out on, including the Mondeo and the Prius, is the lack of an electric charge facility from the mains. That requires a larger on-board battery pack and of course raises the price of the vehicle but it significantly reduces CO2 taxation costs and improves fuel economy even more.

The new Mondeo is still considered by motoring pundits to be the most accomplished D-segment range of roomy cars and estates outside the German brands. But for some owners/drivers the Mondeo name is not always the most desirable in terms of satisfying the ego of company car drivers who would rather be behind the wheel of an Audi, BMW, Merc or Jaguar 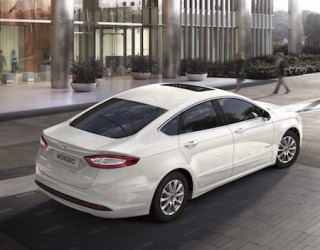 But putting pride aside the Mondeo does most things well. It has the new Ford family face which resembles that of an Aston Martin, it looks long and sleek in any of its body forms, it is exceedingly spacious inside and all other versions, other than the Hybrid saloon, have a huge boot or load carrying space.

The Mondeo Hybrid with its Titanium specification has 16-inch alloy wheels with high profile tyres which contribute to a very comfortable ride. The specification is geared towards the business user with Ford’s DAB navigation system and 8-inch touchscreen.

Generally the interior looks and feels well put together but there are some low cost shiny plastic areas of trim. I am not a great fan of Ford’s failings in the ergonomic layout of controls and the multitude of switches and buttons. The new Mondeo is better in that respect than the Focus and Fiesta but it still requires improvement to de-clutter the facia panel and centre console and that would improve the ambience of the interior and move it closer to the premium brand sector

The Hybrid version in the new Mondeo range might not be the most agile of models in terms of its handling sharpness. Enthusiastic drivers will not find it that rewarding in terms of outright pace, but in reality as I found out after day-after-day of long journeys at high speed interrupted by in-town stop-start commuter traffic, it became a thoroughly acceptable and less tiring way to undertake long distance travel and the real-life good fuel economy was easy on my pocket as well.

Against: Hybrid models are only saloons, no electric power plug-in function, limited choice of specification levels, long range cruiser or urban taxi rather than a nimble rep-mobile.