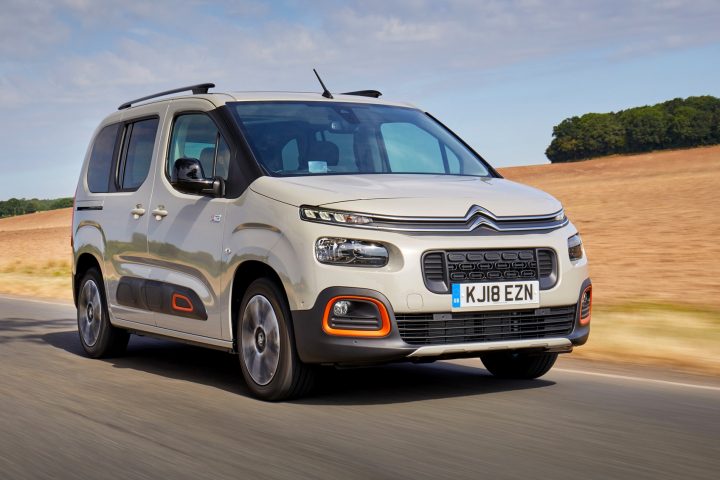 The Citroen Berlingo has just been awarded the 2019 MPV of the Year title in the annual What Car? motoring Oscars.

MPV multi-purpose vehicles, or ‘people carriers’, as we know them in their heydays of the 80s, 90s and early 2000s have lost out in terms of sales to the growing desirability of owing an SUV – ‘sports utility vehicle’. But manufacturers of MPV type vehicles, Citroen call their new Berlingo a Leisure Activity Vehicle, are fighting back although they are still eager to sell their latest SUVs.

MPV UK sales fell by 34% last year with a total of 73,906 registrations and that was on top of a 10.7% fall in 2017.  But there is still a demand for such five and seven seat, spacious and versatile models so manufacturers have responded with a raft of new and updated models.

The latest to hit the market come from the PSA Group with three of their brands coming up with versions of the same vehicle.  These are the Peugeot Rifter with SUV exterior styling features, the Citroen Berlingo  with its leisure use styling additions such as their signature air bump bodywork protection pods and the Vauxhall Combo Life which perhaps looks the most utilitarian and they all produce van style versions of these models for the commercial vehicle market as well.

Like the Rifter and Combi Life, the Citroen Berlingo comes with a choice of two body lengths, the M with five seat models which are 4,403mm long with a wheelbase of 2,785mm and the XL seven individual seat variants which have a length of 4,753mm with a wheelbase of 2,975mm.  The cargo space, depending on the model, ranges from 775 to a massive 4,000-litres. With independently folding rear seats and a folding front passenger seat the load maximum load length can be up to 2,700mm for the M and 3,005mm for the XL models.

On the subject of figures Berlingo M versions start at £18,875 and go up to £24,395. The longer XL seven seat versions start £20,795 and rise to £26,095, all considerably less expensive than an SUV. For an extra £650 you can add Advanced Grip Control with Descent Control, the PSA Group’s clever computer controlled front differential which supplies extra driving torque to the wheel with the most grip and also includes grippier road tyres. 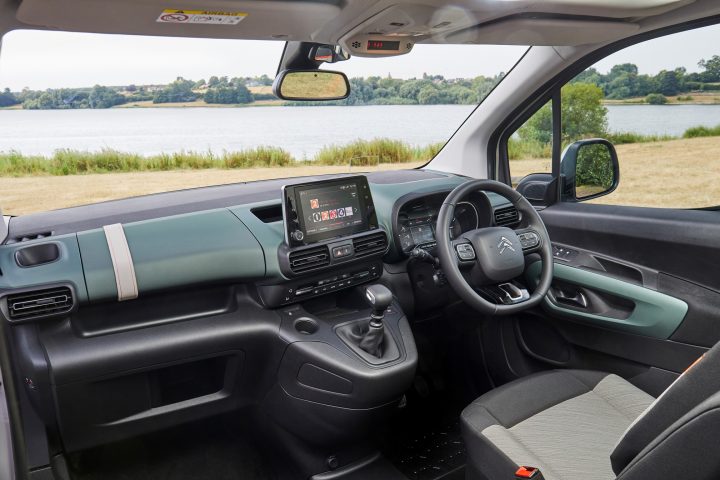 Both the M and XL body lengths are available with Feel and Flair specification levels with 17 variants in the new range.  Engine choices, depending on the variant, are 1.2-litre three-cylinder PureTech  petrol 110hp with a 6-speed manual gearbox with an 8-speed auto to be introduced soon, the new 1.5-litre four cylinder BlueHDi with either 75hp or 100hp with manual 5-speed gearboxes and a 130hp BlueHDi unit with 6-speed manual or 8-speed auto gearbox choices.

Like the Peugeot and Vauxhall stablemates the Berlingo has two hinged front doors and two wide opening sliding rear side doors for easy uncluttered access and a huge and high opening rear tailgate giving access to a low height load floor.

Also like its stablemates the new Berlingo sits on the PSA Group’s EMP2 platform at the front for better handling, manoeuvrability, use of driver assist systems, improved electronic steering response and a better turning circle.

At the rear the previous Berlingo platform is used to maximise load volume and retain the width between the wheelarches. For good measure Citroen’s hallmark ride comfort with their cushioned bump-stop suspension system is employed.

The floor of the Berlingo behind the front seats is totally flat to the rear so there are no obstructions for getting in or out of the vehicles, restriction of leg and foot space or carrying loads and potentially mobility aids.

The rear side sliding doors I found really very practical especially when getting in or out of the vehicle in side-by side parking spaces as the Berlingo is a wide 2,107mm. 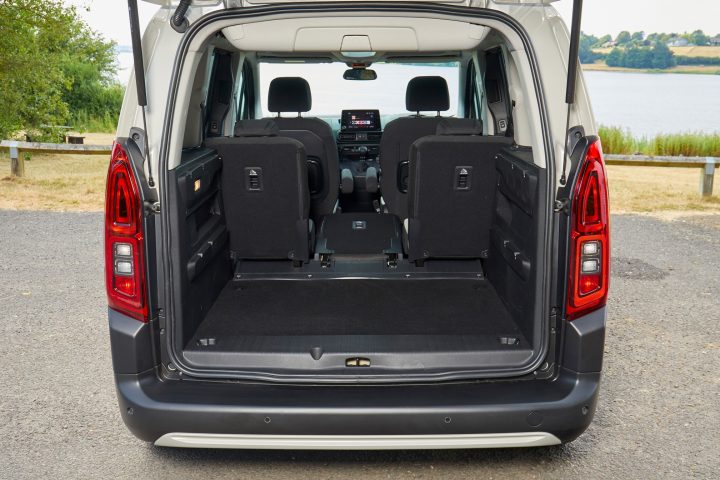 Also maximising usability are the 28 storage spaces housed within the cabin which provide an extra 186-litres of storage capacity and there is also a very clever Modutop ceiling storage system option which includes an airbag in the roof function, ambient lighting plus a panoramic sunroof with electrically operated blind which costs £750 but is only available for the five seat M models.

Specification for both Feel and Flair models is high and includes most of the safety and driving aids found on most modern day passenger cars and SUVs.  Some items of note are the 8-inch centrally positioned touchscreen, Bluetooth, multi-function computer, cruise control, auto door locks when the vehicle is in motion, air-con, electric and heated door mirrors, DAB digital radio, Mirror Screen with Apple CarPlay, Android Auto and MirrorLink connectivity, a full set of airbags front and side, electric front windows, auto lights and wipers and 16-inch steel wheels.

A number of extra cost options were fitted to my XL Flair test drive model and these included the Park Assist Visio Pack at £700 – most useful because of the size of this longer model, a £100 Smartphone charging plate and the £400 Head-Up display.

Overall the interior with its low waistline and high level roof gave a light and airy interior ambience with good visibility although the parking aids were really useful given the length and width of the vehicle.

The seats, all of them, front to rear were comfortable and supportive, access for a seven-seater to the middle and third row of seats was very good and much better than a seven-seat SUV.

The overall quality of the interior trim I would say was designed to be durable rather than plush with not much in the way of soft feel plastic trim, more hard feel but tough which given its potential as a lifestyle vehicle, family bus, Motability transport or taxiing and chauffeuring business is sensible. Another example of the Berlingo’s functionality over fashion credentials.

I recently rediscovered the benefits of MPV over an SUV.  For many years my family transport for our Cornwall holidays has been with an SUV, sometimes of large or more often mid-sized type. However for a change last September I opted to use the new Citroen Grand C4 SpaceTourer, the replacement for the long serving Picasso MPV. 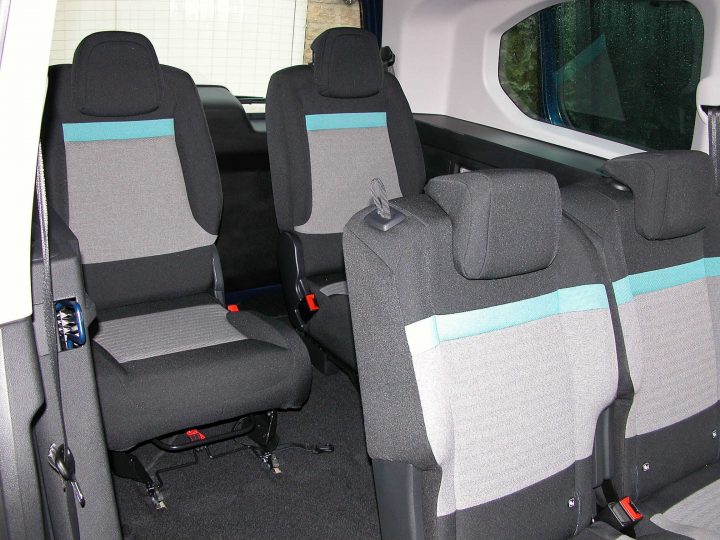 I found it to have cavernous and clever passenger and load carrying solutions, much more practical and comfortable than a popular must-have SUV and it still looked an attractive and stylish upmarket vehicle, not just another SUV.

However the new Citroen Berlingo looks what it is, a big box on wheels, hugely practical, easy to live with and very functional when multi passengers, sports equipment or loads need to be carried. As everyday transport for one or two people perhaps it’s not as appealing unless it’s being used for Motability, taxi or chauffeuring uses.

My new Berlingo XL Flair seven seat test model was powered by the new 1.5-litre, four-cylinder BlueHDi turbodiesel engine with 100hp and matched with the 5-speed manual gearbox costs on-the-road £23,575 and with options £25,570.

Now that price for the space you get has to be value for money when compared to an SUV of similar size and capacity. Anybody being practical about buying a new multi-seat vehicle should consider why they would pay much more for an SUV when chances are it only as two wheel drive anyway.

Not so positive was the quality of driveability of this Berlingo model. The 1.5-litre, 100hp BlueHDi turbodiesel engine, whilst refined enough, was on the tardy side and it needed to be worked harder than I liked to keep up momentum at cruising speeds.

Lose that momentum and slip out of the powerband and it was hard work to build up speed again. It has 250Nm of torque from 1,750rpm but below that rpm figure it was a reluctant performer except for pottering around town. On country roads it was a constant change up and down the gearbox to keep the engine in its responsive powerband. Top speed is 109mph but zero to 62mph took a lengthy 12.9-seconds. I think the 130hp/300Nm BlueHDi turbodiesel unit will be a better option for a vehicle of this large size both in terms of drivability and real-life fuel economy as it will work less hard.

That said the fuel economy wasn’t too bad with an overall 49.5mpg returned for a week’s driving over mixed road conditions. It’s not close to the official 65.7mpg Combined Cycle figure but realistically it was very acceptable given the size of this vehicle.  With CO2 emissions of 114g/km, First Year diesel rate roads tax costs £205 before reverting to the Standard rate of £140.  Company car users will pay 27% Benefit-in-Kind tax and insurance is only Group 11E which for such a large vehicle capable of carrying with multiple peopled is cost effective. The warranty is three-years/60,000-miles.

The ride comfort in true Citroen tradition was excellent. Yes the softer settings induce more cornering bodyroll but not enough to unsettle passenger’s stomach. The handling was generally well controlled and predictable and after a while I got used to the cornering understeer.  The steering was weighted on the light side at low speeds but lacked feedback at times although the tight turning circle was a bonus in town traffic and during parking. 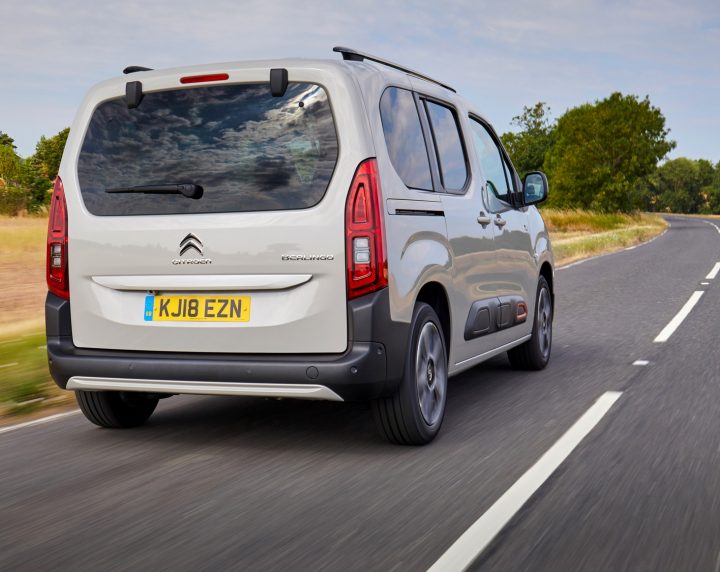 Whether a customer chooses between the Citroen Berlingo, Peugeot Rifter or Vauxhall Combo Life from this trilogy of new ranges, as they all are priced more or less the same with the same engine options, the same seating and load carrying combinations, will depend upon where they get the best financial deal. After all it is a buyer’s market in these uncertain times.

For:  A very practical vehicle, versatile combinations of seating and load carrying, comfortable ride, good value given the space and specification it offers, much better value for money than a 7-seat SUV unless 4WD is a necessity, reasonable real-life fuel economy

Against:  This 100hp engine can struggle for responsiveness and acceleration at times, not as rewarding to drive as an SUV but far more comfortable, real-life fuel economy was too far below the official Combined Cycle figure, ungenerous warranty.