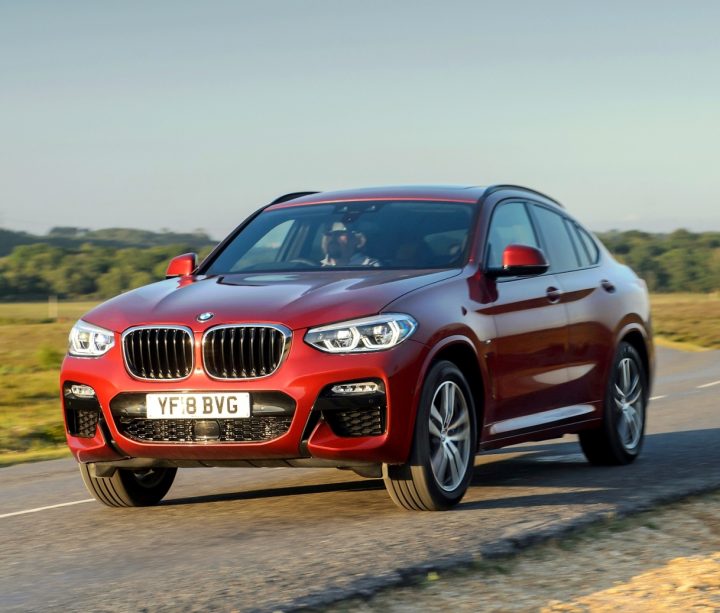 The BMW X4 is a five door aggressively styled coupe version of the X3 mid-sized Sports Activity Vehicle as BMW calls its SUVs.

This is the second generation range and the new X4 made its World debut at the Geneva Motor Show in March this year. Over 200,000 global sales were achieved by the first generation niche model introduced in 2014.

As before each version has xDrive all wheel drive technology with automatic transmissions as standard. Four engines will be on offer in due course. Available now is the 20d 190hp diesel Sport priced at £42,900 or with M Sport spec priced at £45,600 and M Sport X at £47,000. There is the 30d 265hp diesel with prices through the same three spec levels starting at £48,715 and rising to £52,815. Arriving soon are two M variants – the M40d 326hp diesel costing £55,315 and the M40i 354hp petrol costing £55,725. All versions have xDrive all wheel drive traction via an eight-speed automatic gearbox.

James Thompson, Head of Medium Cars for BMW UK said at the recent UK press launch traditionally they sell around 2,500 X4s in the UK each year, that’s about one X4 for every five X3 versions. The 20d M Sport X4 will take the majority of sales at up to 1,800 units with 500 units of the M versions and up to 300 units of the 30d being the likely sales split between the models. Around 70% of X4 sales will go to retail customers slightly more than the X3.

The new X4 over the outgoing version is 70mm longer, 37mm wider and the wheelbase has been extended by 54mm to increase rear seat legroom. It also rides lower by 3mm and it has a 50-50 weight distribution to improve its handling performance. 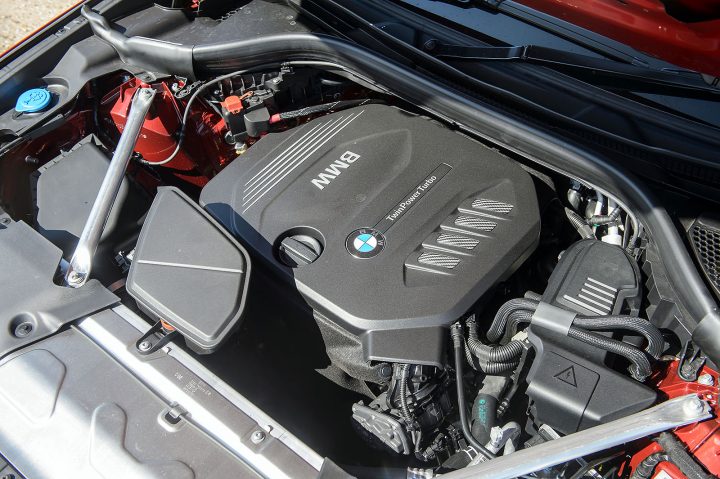 BMW say the wider rear axle and slightly lower ride height combine to provide sharper on-road driving performance.  Inside over the X3 the standard specification is higher and the quality is said to be even more premium with a higher number of leather upholstery combinations.

As a like-for-like price guide the best selling X4 20d M Sport variant is around £3k more than the equivalent X3 version reflecting the technical changes, sharper sportier handling and higher ‘premium-ness’ as BMW calls it.

Styling wise the X4 over the X3 has a more aggressive sports appearance enhanced by the coupe roof side profile with a 10mm lower roofline and a steeply forward raked rear tailgate promoting its athletic look. With a wider rear track the rear wheelarches and haunches are far more prominent giving it that sportier stance than the X3 but the sloping rear tailgate and lower roofline make it less practical for family duties, more fashion over function styling wise. Upfront there is a bolder version of the hallmark BMW kidney grille flanked by twin headlight units. New horizontal LED foglights are integrated in the outer air intakes and all versions have LED headlights as standard.

In addition to the standard Sport models the M Sport and M Sport X options add further to the bold exterior appearance with 19-inch alloy wheels and aerodynamic front and rear aprons and side skirts. Of course there are more styling options including styling accents, individually designed air intakes and 20 and 21-inch alloy wheels options. 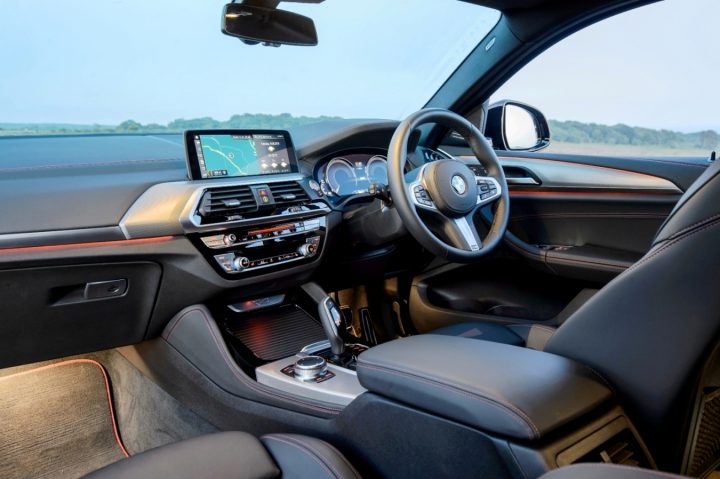 Inside there is a sporting premium feel front cockpit  and the slightly raised and redesigned front sports seating gives a clear view of the road ahead.  On the subject of visibility, due to its coupe design the view to the rear quarters is limited as is the vision through the steeply raked tailgate window.

The tailgate window doesn’t have a wash/wiper unit either so road dirt can accumulate on the glass. Fortunately a standard fit rear view camera and parking sensors helps with reversing and parking.

Rear seat passengers will appreciate the improved legroom but for tall people headroom is just about ok but the rear compartment ambience edges towards being somewhat claustrophobic. The rear seats are divided 40/2040 and fold to increase the boot from 525-litres to 1,430-litres a little less than the 550 to 1,600-litres of the X3.  But you cannot fault the interior quality, it looks and feels ‘crafted’ rather than mass produced although it is similar in layout and design to the X3. There are the usual multi-function steering wheel buttons, large centrally mounted 10.25mm touchscreen, lower centre console rotary controller and the driving mode selector. 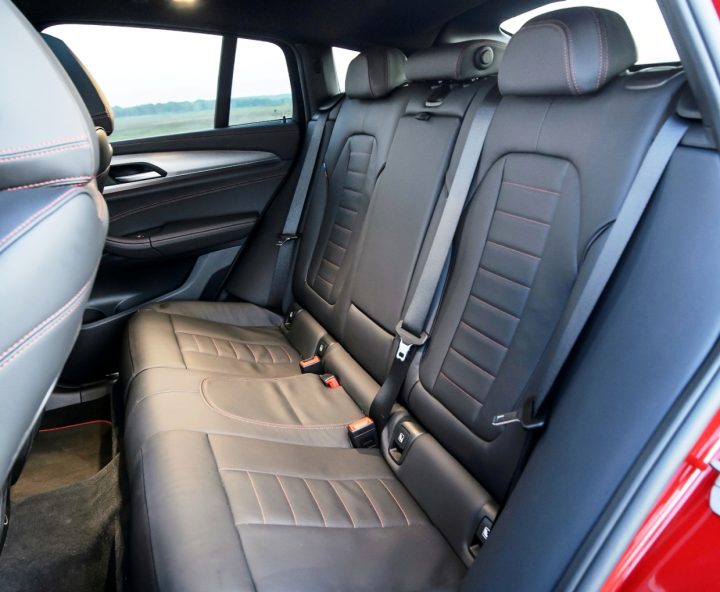 Despite the standard high spec BMW still find ways of offering more and there is a huge array of extra cost options.  My 20d M Sport X test drive car costs £47,000 but still BMW found ways to add another £8,630 worth of options to it.

The most useful option, given it was fitted with 20-inch wheels with run-flat tyres, was the affordable £460 Adaptive Suspension which operated mostly in Comfort mode during my time with the car and  that setting didn’t detract at all from the sharp and well controlled handling for this high-riding SUV. It allowed the impacts from potholes and poor road surfaces to be suppressed most of the time.  The cornering handling over the X3 with its revised suspension and wider rear track provides a flatter ride with less body roll. But at times on well worn main A-roads and motorways the rear end fidgeted about as the wheels followed the tram-lined surfaces and there was noticeable tyre noise intrusion. 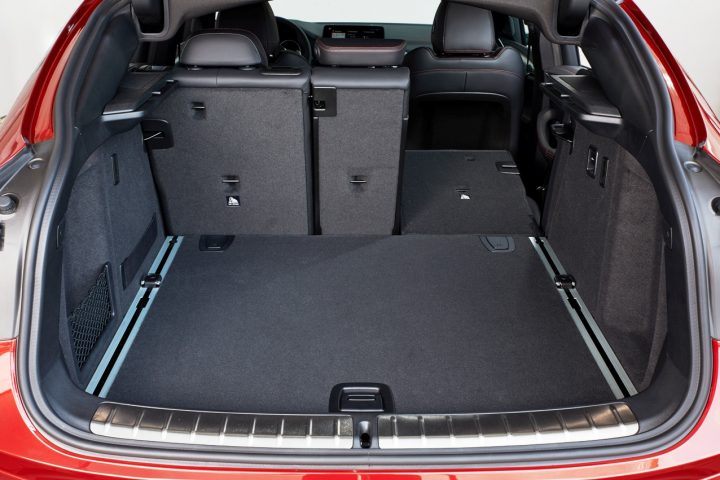 The 2.0-litre 20d 190hp, four-cylinder turbodiesel engine is well known throughout many of the BMW model ranges and with 400Nm of torque available from 1,750rpm it offers plenty of response for acceleration and relaxed effortless high speed cruising.

Officially the new WLTP Combined Cycle fuel economy figure, applicable for all new cars from September this year, is 50.4mpg  and my week of driving, covering all types of journeys with the air-con in operation due to the summer temperatures, my real-life figure was 43.5mpg.

Although WLTP compliant my real-life figure still fell well-short of the new official figure and by no means did I ‘push’ the X4 to any great extent as I always try to mirror the way  the majority of customers use their vehicles. 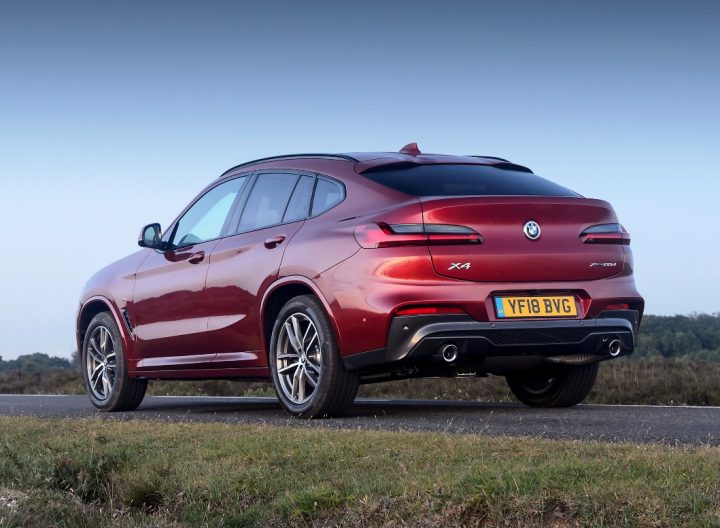 Overall if you want a mid-sized SUV/SAC bearing the BMW name, the new X4 offers a posher cabin, sportier exterior styling, added equipment and a more refined ride over the X3.  But the X3 is considerably cheaper and more practical in terms of more rear seat headroom and load space. It’s just a question of whether you want fashion over function?

Against: Compared to an X3 it’s a lot more expensive, less rear seat headroom and less boot/load area space, restricted rear visibility, could be deemed as a fashion over function model range.