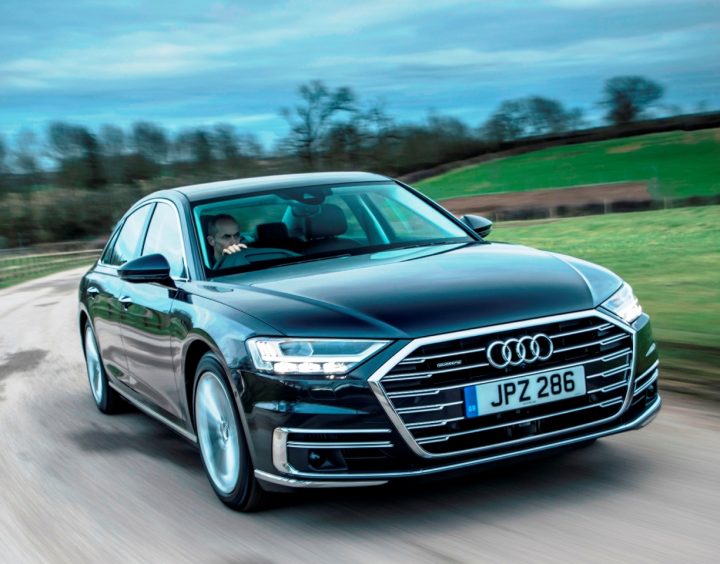 The new range flagship Audi A8 luxury saloon in standard or long wheelbase forms arrived in the UK earlier this year and it’s the first car in the world to be built for the forthcoming age of autonomous driving claims Audi, but progress has a price, writes David Miles.

All that’s required is legislation changes to allow Level 3 autonomous technology to be used and some say by the end of this year. Highly automated driving, or Level 3 autonomy, under certain conditions allows the driver to switch on the autopilot and sit back and enjoy the ride. Audi’s Traffic Jam Pilot laser-guided system can take control of the A8 for acceleration, braking and steering at speeds up to 37mph, all that’s missing is the infrastructure and authority for the 40-plus technologies in the A8 to be utilised.

That’s for the future, but here and now the new A8 has most elements of autonomous driving included in its luxury four door executive saloon.  But with my hands, feet, eyes and brain firmly in control I have just spent a week test driving this technology tour-de-force machine.

Unfortunately as good as all this technology appears to be on paper, in the case of my new Audi A8 50 TDI quattro 286hp standard wheelbase luxury saloon, it had technical issues. At various times during my week of driving, first early starts of the day resulted initially in the parking brake warning light coming on and the system saying inoperative; it wasn’t it worked fine but the warning light stayed on all day. The same happened the next day and then the fault went away for two days. Then a few days later four warning lights/messages came up on start up; parking brake inoperative, Safety Sense and radar braking  warning, nearside headlight not working warning and blindspot warning lights in the door mirror not working. Some were actual faults, some were false warnings.  These lights stayed on for the duration of an 80-mile journey. For the return leg four hours later the warning lights were out and all seemed normal and remained normal until I returned the car to Audi. Not the most convincing start to an expensive luxury car claimed to be autonomous driving ready.

No doubt this was a rogue car but it’s not the first new test car I’ve had so far this year with faults. These include a total failure of windscreen wipers on one, two cars have had radar braking inoperative warnings and the fourth car had tyre pressure warning alerts although after checking the pressures were fine. I’ve also just recently had test cars, one being this Audi A8, where the sat-nav Google Maps graphics were out of date. They showed in my home area of a small Cotswold town to be surround by green fields, in fact they are now built on with new roads and houses and have been that way for at least three years.  Technology is great when it works and is reliable. Seems it isn’t dependable as yet in some cases.

The fourth generation Audi A8 is available in two wheelbase lengths, standard and long, and all versions are available with Standard or S line specification levels.

They both have the choice of two V6 engines, the newly designated 50 TDI 286hp turbodiesel and 55 TFSI 340hp petrol and both units incorporate a 48-volt mild hybrid starter generator system.

Previously the power units were known as 3.0 TDI and 3.0-litre TFSI.  All versions have an 8-speed Tiptronic automatic transmission with quattro all wheel drive.

Prices range from £69,415 to £77,905 but customers can add considerably to that if they delve into the long list of extra cost options list.  For instance my test car, the range starter version – the 50 TDI quattro standard wheelbase, costs on-the-road £69,415, but to showcase some of the extra available it finished up with a total price of £91,690.

At almost 5.2-metres long the standard wheelbase model I tested looks imposing, a car of real class and status with striking styling lines enhancing the vehicles length as does the bright metalwork trim over the doors which enhance the coupe styled silhouette. 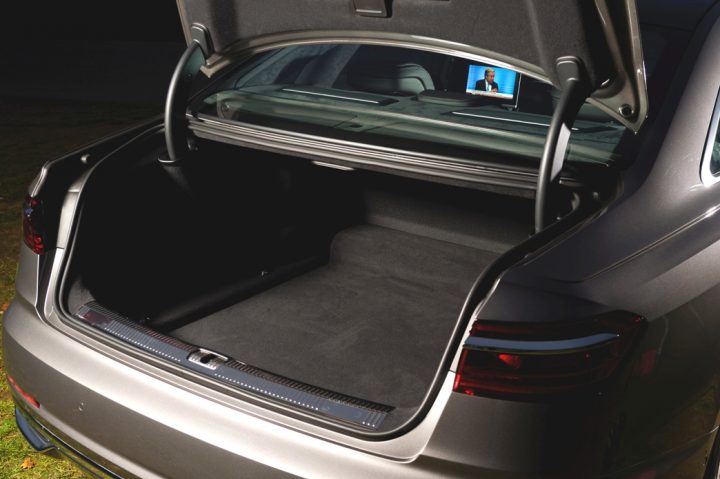 The front and rear doors are wide opening allowing easy access for passengers into its luxurious interior where even this standard length version gives ample legroom and headroom for rear seat passengers.   A 505-litre boot will carry the executive luggage with ease.

Inside it has the highest quality of materials from the leather upholstery to luxury quality carpeting to the trim with its wood inlays. But I wouldn’t say the interior ambience with its minimalist design was warming or particularly welcoming.  It’s all the there but I found it clinical, almost sterile and lacking in character. 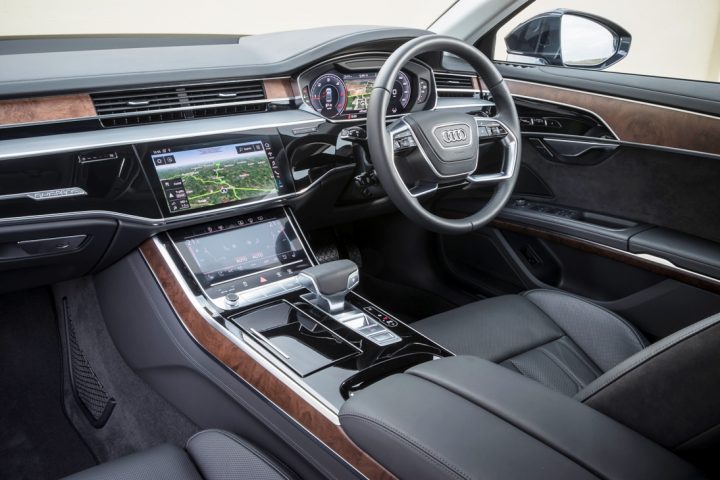 The central upper and lower touchscreen are well placed but the lower one has replaced more user-friendly traditional controls and buttons so lots of finger prodding was needed to alter the heating and ventilation and other functions.

On that subject I found with the standard wheelbase version I tried, the rear heating/air-con controls had to be operated by the driver, there were no independent controls in the rear. 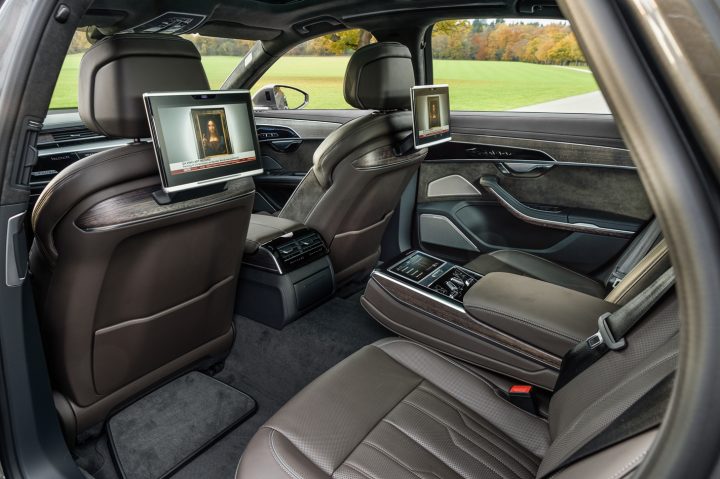 Given that the primary function of the A8 and its two main rivals, the BMW 7-Series and Mercedes S-Class,  will be for limousine class business, celebrity and diplomat  chauffeuring use, I found it strange only the long wheelbase model has rear independent air-con/heating controls.

The central touchscreens are easy enough and prompt enough in their use but the lower one in particular does show up fingerprints and on a bright sunny day it was not always easy to see the areas of the screen to touch. Posh but not perfect is my verdict. 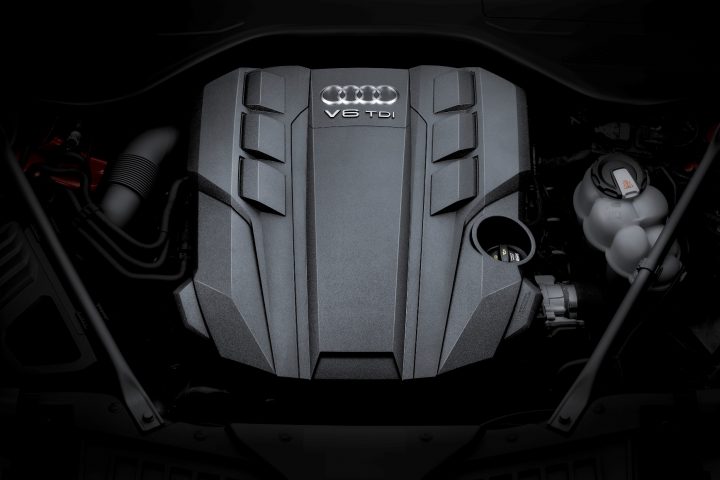 However when it comes to perfection the 3.0-litre, V6 50 TDI 286hp turbodiesel engine is brilliant. With a huge 600Nm of torque from just 1,250rpm right through to 3,250rpm it just goes on giving ‘grunt’ right through the acceleration range never peaking out of pulling power  and it is remarkably quiet and refined.

At low stop/start or in-town speeds the unit was remarkably smooth and the gearchanges with the 8-speed auto gearbox imperceptible.  The 48-volt mild hybrid system uses a starter motor-alternator unit and an additional lithium-ion battery.  This combined unit not only operates the fuel and CO2 saving stop/start system, its harvest power at a higher rate and it allows the engine to switch off into a fuel saving coasting/overrun mode whilst the electric system still powers the car’s operating functions.   That fuel saving function certainly seems to work as my week of test driving returned an average 38.2mpg, including in-town and country roads driving, with 42.1mpg returned for a 160-miles motorway journey.

The quattro all wheel drive system with its variable distribution or torque to each of the four wheels makes light work of keeping this large car nimble and the four wheel steering is a bonus for busy in-town traffic manoeuvrability and eases parking given its size. On the open road the car proved to be well balanced, the ride comfortable and made for relaxing transportation. 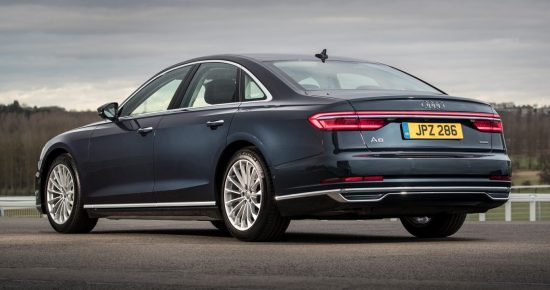 The new Audi A8 is a car ahead of its time in terms of driving support and eventually autonomous driving functions, I just wish my test car didn’t let itself down with significant technical glitches whether they were real or false ones.

Against: High ownership/tax costs, big car which takes up a lot of road and parking space, expensive accessories, average warranty, test car had too many warnings, false or otherwise, regarding potential technical faults.