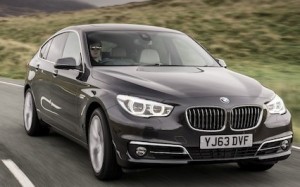 THE 2014 BMW 5 Series is more of the same but better, writes David Miles.

During 41 years there have been six generations of the BMW 5 Series large executive car range and the latest line-up of Saloon, Touring estate and Gran Turismo five door coupe styled hatchback are now getting their mid-life updates for the 2014 model year.

But it will take a sharp eye to see the differences. They are mainly more engine options, more efficient Euro 6 compliant engines introduced a year ahead of schedule, increased specification, revised suspension settings, more features for the ConnectedDrive system and some versions with lower purchase prices.

BMW says the current sixth generation 5 Series has been the most popular ever with over one million units of the Saloon alone sold during the last three years.

Brian Cox, BMW’s UK product manager for large cars said at the media launch that feedback from customers indicated they wanted little change – hence just the subtle styling tweaks but with more importance on improving standard specification, improving ride comfort and of course we as a manufacturer have to comply with Euro 6 emissions by September 2014 anyway, so we have introduced them now.

As regards specification levels, Cox added that the SE level will account for 40% of UK sales, the M Sport 45% with the new Modern and Luxury levels sharing the remaining 15%.

BMW said that because the 184hp version of the revised 2.0-litre diesel engine in the Saloon now has CO2 emissions of 119g/km for both manual and automatic transmissions, matching the figures of the former EfficientDynamics model, the ED model is now discontinued.

CO2 emissions for the 5 Series line-up are reduced by up to 18% for the 2014 models which for company car customers will in some cases mean a lower level of Benefit-in-Kind tax and with lower taxes and in some cases lower prices – leasing rates are reduced on some models.

Those are the facts and figures but what are the most significant changes apart from more fuel efficient engines and revised suspension settings for improved ride comfort and even sharper handling?

The 5 Series Saloon and Touring have been subtly modified to give their sporting characters a sharper edge. There are additional contour lines around the BMW kidney grille and a re-structured lower air intake. All variants of the 5 Series have Xenon headlights as standard and Adaptive LED lights are now optional.

The door mirrors of all 5 Series models now incorporate indicator repeaters with the Saloon and Touring having new-style tail lights with slender LED light strips. Along with an additional crease in the rear apron, they emphasise the car’s width and sporting stance.

The Gran Turismo has the most obvious visual changes with a new front air intake and an extended tailgate which ensures the roof blends more harmoniously into the rear end. An additional benefit is that it increases boot capacity by 60 litres to 500 litres.

A sweeping crease extending into the flanks and a chrome strip in the rear apron give the rear of the Gran Turismo a sportier look accentuated by new horizontal lights with LED strips. 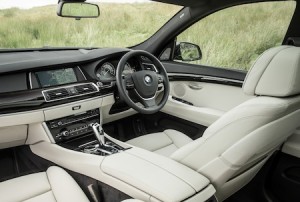 Inside all models now have chrome strips bordering the central Control Display in the cabin, and the Saloon and Touring have larger storage areas and cup holders. The Comfort Access system can now close as well as open the boot or tailgate by a movement of the driver’s foot beneath the rear apron. There are new paint and alloy wheel options and new Luxury and Modern models increase the range of personalisation possibilities.

The network of intelligent ConnectedDrive technologies has been expanded in the new 5 Series range to advance the safety, connectivity and convenience of both drivers and passengers.

as standard on all six-cylinder models. As a result, every 5 Series customer will now benefit from the valuable BMW Emergency Call function. This feature uses the built-in BMW SIM card to establish contact with the Emergency Services in the event of an accident. Drivers can manually trigger an ‘eCall’ to request assistance, but also have the reassurance that their BMW will automatically activate a call should any of the crash sensors be deployed. A genuine enhancement to vehicle safety, this service is active for the lifetime of the vehicle at no additional cost.

The optional Professional Media Package –has been enhanced to include the latest generation Professional Navigation system complemented by the full range of ConnectedDrive Services including Real Time Traffic Information and BMW Apps.

This system includes the new iDrive Touch controller, allowing written entry of addresses and telephone numbers and an intelligent Route-ahead Assistant, which anticipates road conditions and provides advice to the driver on how to maximise an efficient driving style based on braking and acceleration points.

Advances are also seen in optional safety systems. The new Driving Assistant delivers a tailored combination of camera-based driver assistance systems that significantly reduce the risk of potential collisions at both high and low speeds.

The optional BMW Night Vision with pedestrian recognition also evolves to include the industry leading Dynamic Light Spot. This advanced system uses a thermal imaging camera to detect heat emitting objects and, in addition to acoustically alerting the driver of potential hazards, the fog light beam is directed to clearly illuminate the object ahead to maximise the reaction speeds of the driver. 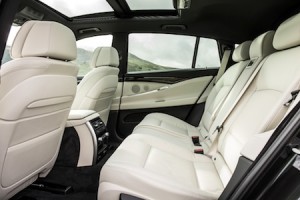 Overall the improvements are more progressive than radical and it boils down to how do BMW improve what is already the best and benchmark large luxury executive range of models?

The 520d, 184hp, 2.0-litre turbodiesel still is the pick-off the bunch as far as engine choice goes with a test drive fuel consumption of 46.5mpg with the Saloon driven in its Eco Pro mode, down on the official 62.8mpg figure, but for a Saloon of this stature it is really impressive.

Using the same route in Sport mode the economy was a real-life 41.3mpg, still excellent for a luxury five-seat executive Saloon.  Top speed for the Saloon is 145mph and zero to 62mph takes just 8.1 seconds which considering this is only a 2.0-litre four cylinder engine is really impressive.

I also had a brief outing in the newly introduced 518d, 143hp version of the 2.0-litre turbodiesel engine which returned 46.9mpg in Eco Pro mode against the 62.8mpg officially figure.

The top speed for this unit in the Saloon is 132mph with zero to 62mph taking 9.7 seconds. In truth driving on our busy roads there wasn’t much to choose between both engines is an interesting move and will appeal to company car drivers who have cannot venture above the £30k price tag.

The latest 5 Series has the usual choice  of Comfort, Comfort+, Sport and Sport+ driving modes as well as Eco Pro which adjust the engine response and suspension and body control settings. The Comfort settings are fine for open road cruising giving relaxed and comfortable travel.

When the conditions allow on fast, winding open roads the Sport setting does improve the handling, tightening the suspension and body control and eliminating the tendency for the big car to ‘float’ during high speed cornering.

It would be good to have an Auto mode where the suspension and steering automatically switches between settings to optimise the handling and comfort to meet the prevailing driving conditions rather than having to continually manually select them. 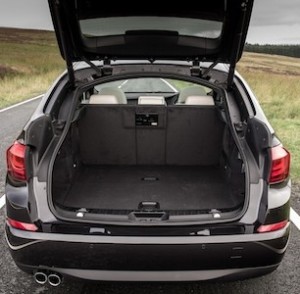 It is less clear now as to which is the best specification to choose following the enhancements to all levels on offer. Personally I’d stick with the SE, the standard ride is smoother and the road noise is less intrusive with the 17-inch wheels but business execs might like the look of bigger 18-inchers and want a bit more luxury even though leather is standard on all 5 Series models with cloth a no cost option.

The 5 Series has always and still offers a wide choice of engines, fixtures and fittings to meet all individual requirements. The Mercedes-Benz E-Class, Audi A6 and Jaguar XF do as well, if not better, in certain areas but overall the 5 Series leads the big executive car sector in terms of completeness.