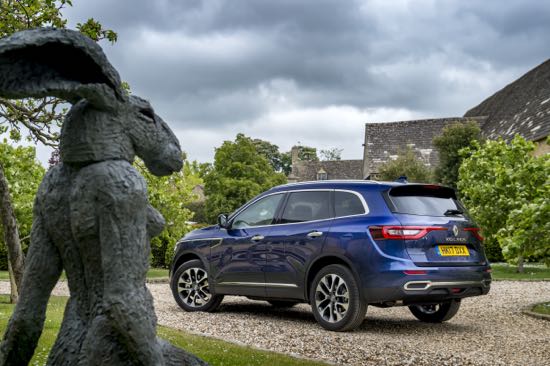 The Renault Koleos will see the French marque return to the larger-sized SUV sector this autumn.

After the demise of the Espace and Laguna in 2011, Renault was left without a contender in a sector which has really taken off.

Now it has returned with a Korean-made challenger to the Nissan X-Trail and Ford Kuga and the first models are arriving in showrooms for customers to order and deliveries begin in September and October.

Yann Le-Graet product manager for Koleos in Britain said, “Koleos is not about huge volumes and selling cheap because it is just two trim levels and a lot of equipment which buyers have told us they want in their SUV.

“It will be an important addition to our SUV & Crossover family of Captur and Kadjar and help build up the brand after its rationalisation in 2010 and it comes on the back of strong sales for Renault UK over the last few years.”

Instead of tens of  thousands sales, expect Koleos to be in thousands which will be good for Renault, the dealer network and the buyers, particularly when they want to part exchange in a couple of years.

The five-seat Koleos with its large boot-space up to nearly 1,700 litres matches the Nissan X-Trail in size and will be sold in high level Dynamique S Nav and Signature Nav trim levels with 130 1.6 dCi or 175 2.0 dCi engines and 2WD or intelligent 4×4 powertrain, equipped with 6sp manual or 7sp automatics.

Prices begin at £27,500 for the flagship of the Renault crossover range and it will be sold only as a five-seater in any of the six versions available, with upper trimmed models beginning at £29,800. 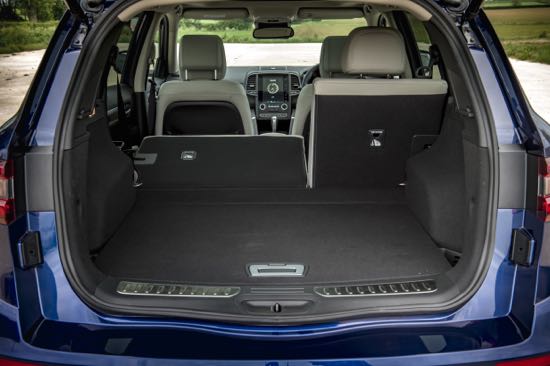 Keeping it like this means the Koleos offers remarkable interior room both for passengers and luggage and Renault’s designers have incorporated an easy to use optional tow bar as well as boot organiser system and quick-fix roofbars together with large interior storage areas, wide opening doors and one-touch folding seats. The upper trim model gets a powered tailgate with motion sensor as well.

As you might expect, Koleos comes with the latest in-car communications and entertainment systems integrated with smart-phone features and a choice of dash-mounted tablets together with Bose sound system. For the driver, there is the latest all-round safety technology and parking aids.

In the 4×4 models an intelligent clutch determines when additional grip is needed and automatically directs it to the wheels with less traction for as long as necessary and this is a slightly higher riding version for wintry or flooded roads.

Koleos arrives now into a UK sector which took saw 100,000 registrations in 2015 and 140,000 last year so it’s one of the really growing markets, the majority are 2WD but there is also a significant proportion of 4WD. Up to now about 87% of orders in the D-sized SUV sector have been diesels and Koleos currently does not have a petrol engine in its range but this could change as it shares power units with Nissan, which is part of the same company.

Renault expect 43% of Koleos sales will be retail and two-thirds to be ordered with the six-speed automatic transmission and 80% to be 4WD. Initial orders suggest 53% will be the Dynamic S and 47% Signature. 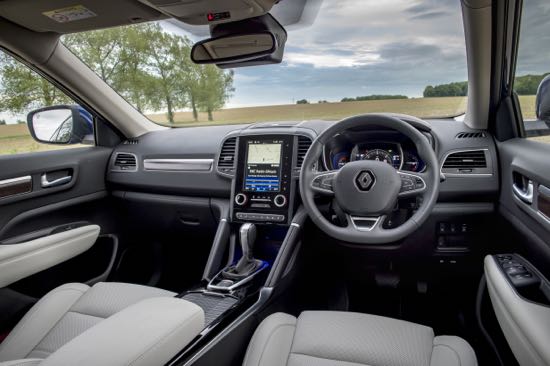 The roominess of the Koleos really impresses from the moment you open the doors.

There is very easy access, particularly into the rear, and the seats are large with a lot of kneeroom for the three in the back and looking into the luggage area you have a very low lip and a good practical boxy shape for carrying things. Simple switches over the back wheel arches flip forward the rear backrests and seats to dramatically raise capacity.

Up front, the 175ps 2.0 dCi engine and six-speed auto-box work well together with low noise and smooth changes, while the 4WD select switch needs no expertise to use and the system can be left to its own decision making about traction priority.

Steering was slightly heavy, the brakes progressive but effective with modest pedal pressure bringing about rapid deceleration, and overall we saw between 34 and 36 mpg over two journeys.

It felt slightly hard on some country lanes but generally soaked up most ridges and off road it was comfortable and capable on a steep loose surface when we started from rest halfway up the track.

The noise levels were low and only the road rumble from the big tyres could be heard inside.

Koleos looks stylish and modern inside and out particularly with the larger tablet on the central console giving a range of information and entertainment options and you can even select background colours to the fascia and dials infront of the driver. 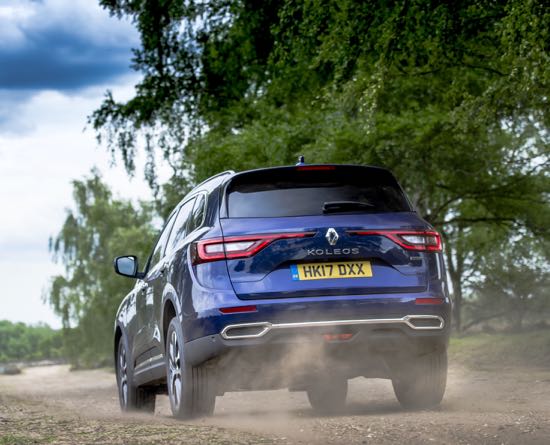 Our leather seats had a very good range of adjustment and were comfortable and generously shaped and padded so you could easily tackle a long journey without any effort from the big engine and smooth transmission. If you want a roomy large SUV, the Koleos fits the bill well but if you want more seats then you’d have to look elsewhere.

However, the reality is how many times would you need seven seats and would that take precedence over your desire for room and refinement?