You are here: Home / First Drives / New Mitsubishi L200 – the legend lives on

The legend that is the Mitsubishi L200 lives on in the new Series 5.

After 33 years and four generations the trend-setting pickup-cum-poser SUV goes on sale in September in the latest in-carnation.

And it’s more car-like than before with new fascia and seats, rotary mode selector replacing secondary levers, and an urban friendly turning circle.

Restyled from bumper to bumper, its lighter and more fuel efficient with lower emissions and consumption, new gearbox and centre-differential, improved suspension and equipment among 330 changes over the Series 4 launched in 2006. 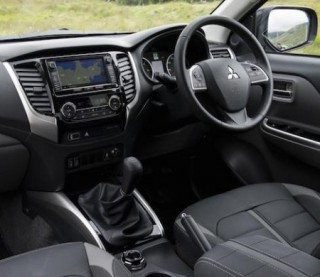 Retaining the trademark J-cab it has good room for five inside without compromising on carrying capacity on the loadbed and it will pull a bigger trailer than rivals at up to 4.1 tons combined.

It joins the Mitsubishi model range at a good time with sector topping sales, which mean a third of the dealer business is the L200 series and the network is rising says Lance Bradley, MD for Mitsubishi UK.

“The dealer network is steadily growing and by the end of this year we should have over 130 outlets and possibly 150 by the end of 2016,” he said.

“It has been encouraging to us because we are getting approaches from bigger dealer groups who have seen how Mitsubishi has out-performed the market with our models and we have a strong new-model programme going forward.”

On tarmac or off-road, the new generation Mitsubishi L200 Barbarian is an impressive performer.

It’s cabin is compact without being cluttered thanks to some thoughtful design and the major controls work well, particularly the higher-ratio steering rack so it can be used more easily in a town car park or winding through woodland tracks.

The simplified transfer selection switch is clearly marked and backed up by on-dash display but on two models we drove there seemed to be an unnecessarily long delay for the system to catch up and make the physical changes dialled in by hand. 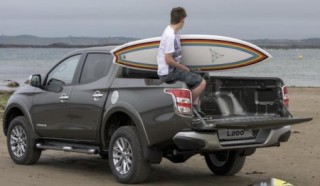 The new suspension has better articulation than before for off-road use and the centre-differential improves traction and reduces wind up on tight turns.

Improvements to the traction control, braking and handling technologies have raised the safety factor of the new L200 in adverse weather on main or motorway roads as well.

The original L200 from over 30 years ago brought a fresh new look and ability to the agricultural community and the new Series 5 is a step-change for today’s townies and country-set.