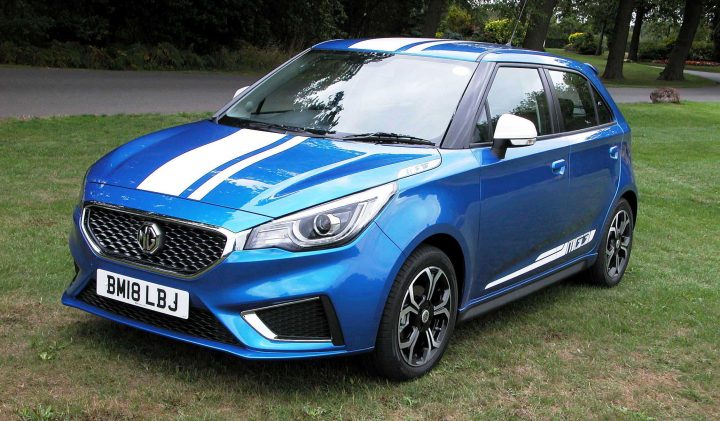 Having been through many periods of ownership, including BMC and British Leyland, today MG is in the hands of SAIC, China’s largest car manufacturer, writes David Miles.

They sold 6.9-million new cars last year globally, 3.52-million in the first six months of this year, and MG is now the global brand for SAIC outside China and for the domestic market their brand of different models is Roewe.

MG Motor UK Limited headquarters is still at the Longbridge Plant in Birmingham where 300 designers and engineers work on creating future MG and Roewe models and is also the base for their parts distribution service.  Longbridge is one of two global design centres SAIC has, the other is in Shanghai.

The company has recently opened a new London flagship showroom is Marylebone and this building also houses their sales, marketing, finance and legal operations.  Currently MG has 80 dealerships growing to 84 by the end of this year and this will increase to 120 by 2020 as their sales grow.

In the UK, MG new cars sales for the first seven months of this year were 5,099 units, that’s more than they sold in the whole of last year, a 122% increase over the same period in 2017.  Their target for the whole of this year is around 9,000 registrations. MG says they are the fastest growing brand in the UK despite the overall decline in new car sales. 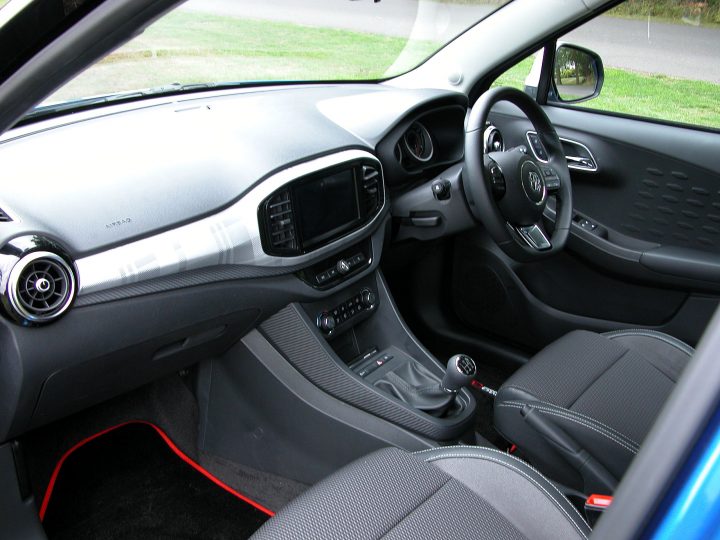 The ‘New MG3’ is how the refreshed MG3 is branded. The B-segment five-door ‘supermini’ sized hatchback arrives on sale in the UK in time for the 1 September new 68 plate registration month at prices starting from £9,495. Reflecting on the redesign and higher equipment on offer, that’s an £800 increase over the starter price of the outgoing model.

The three-model range extends in price up to £12,795 through three trim an equipment levels of Explore, Excite and Exclusive, the latter predicted to be the best selling version. Using MG’s finance offer a mid range model with a five-year 0% agreement costs £149 per month.

All models are powered by a 1.5-litre petrol 106hp four cylinder non-turbocharged petrol engine with a five speed manual gear. No automatic transmission option is currently available but could be added later.  The New MG3 comes with a seven-year 80,000-mile warranty which is fully transferable between subsequent owners.

That’s now, but stepping back in time it’s worth remembering the history of MG. The iconic British MG brand’s history can be traced back to 1924 when it came into being producing fun to drive affordable cars and it could be said modern MG models continue that tradition.

With the arrival of the New MG3 the limited MG range consists of the recently launched ZS compact SUV priced from £12,495 and the larger GS SUV priced from £15,095.   More new models are in the pipeline including PHEV plug-in hybrid SUVs, an all-electric roadster with all-new MG3 and ZS models due in 2022. 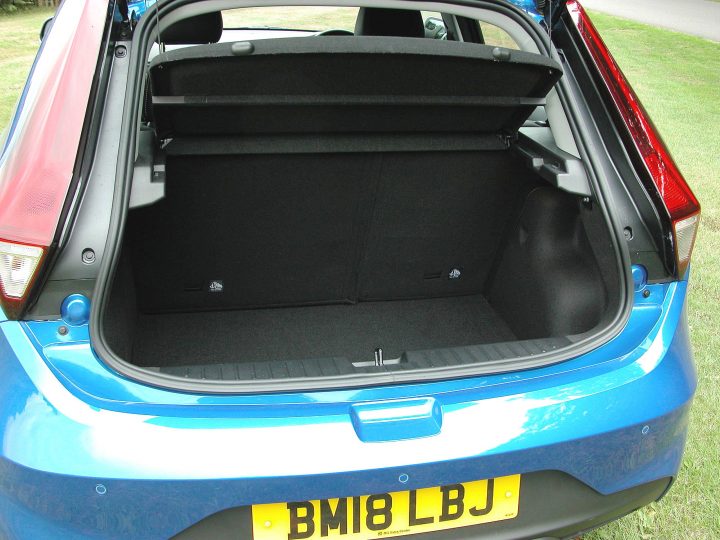 He added that the New MG3 is available with higher specification, the new seven year warranty, six new bold colours and nine new personalisation graphic packs. There are over 1,000 new parts in the latest MG3 including a new front end design, new bonnet, revised tailgate and rear bumper, new fascia and revised controls including an 8.0-inch touchscreen for the two higher spec models.

‘Colour on the Road’ is the new brand statement for MG, this brings colour to the life of customers with the product’s vivid character, higher equipment, personalisation options and the new warranty he said and finished by saying, “MG offers the best value for money cars on sale in the UK – not the cheapest but the best value.”

It’s easy to see the changes; the revised front end, iconic large octagonal MG badge in the upper honeycomb grille leading to a lower grille, flanked by large air vents all with honeycomb inserts in-keeping with the sporting heritage.

From the side the elongated wheelbase suits the car’s proportions and provides for very good rear seat legroom. At the rear is a new design of tailgate and bolder rear bumper. The rear seats have 60/40 split fold down backs which extends the boot space from 285-litres to 1,262-litres. 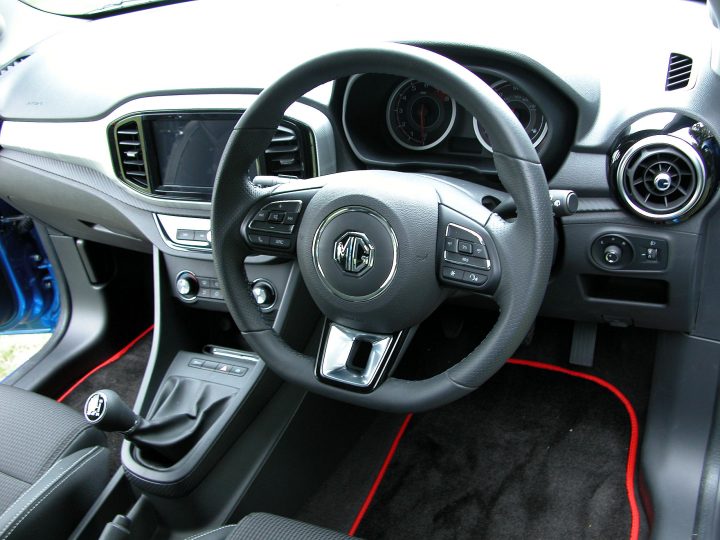 Inside there’s a new fascia with straightforward controls and positioned in the right places, more practical and robust than fiddly fashionable treatment we get with some brands. The interior seems to be well put together and although there is more use of soft touch trim than before, there is still a considerable amount of hard plastic even on the top spec.

All versions come with Bluetooth telephone and audio streaming and AUX/USB as standard, while Excite and Exclusive levels have an 8.0-inch colour touchscreen with Apple CarPlay, DAB radio and steering wheel audio controls. The Exclusive version adds a reversing camera with dynamic guidelines all adding to the value-for-money package

The top spec version has cruise control as standard, air-con is standard for Excite and Exclusive models and all versions have front and rear electric windows, multi-function trip computer, rear wash/wipe unit and electrically adjustable door mirrors. The base version has 14-inch steel wheels and trims and 16-inch alloys are standard for the middle and top spec models. All versions get a tyre repair kit instead of a spare wheel.

Under the new bonnet for all three spec levels is the same 1.5-litre, four-cylinder non-turbo petrol engine as before but now homologated to EU6.2 regulations so its meets the new WLTP fuel economy and CO2 emission requirements for all new cars on sale from September this year.  Power output is a modest 106hp with a limited amount of torque of only 137Nm at 4,500rpm. 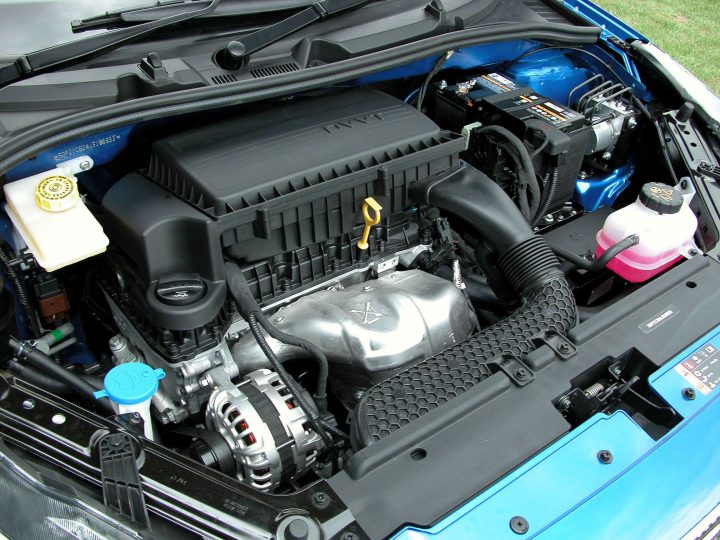 The performance is no more than adequate and  lags behind new generation 1.0 and 1.2-litre turbo petrol engines available in the same sales sector today, but then again the purchase price is much less so we get what we pay for.  This engine is matched with a five speed manual gearbox and that offers slick and precise gearchanges as it needs to because liberal use has to be made of it during driving on winding, hilly and country roads and the motorway had me searching for a sixth gear to reduce engine rpm.

During my brief test driving with the New MG3 using winding Warwickshire country roads and a short section of motorway the figure was 41.1mpg. The new model’s WLTP CO2 figure is a relatively high 140g/km, an increase over the 124g/km for the previous generation model, so First Year VED road tax costs a substantial in this class £205 before the Standard rate of £140 is applied. Company car drivers will pay 29% Benefit-in-Kind tax and insurance is a low Group 8E. 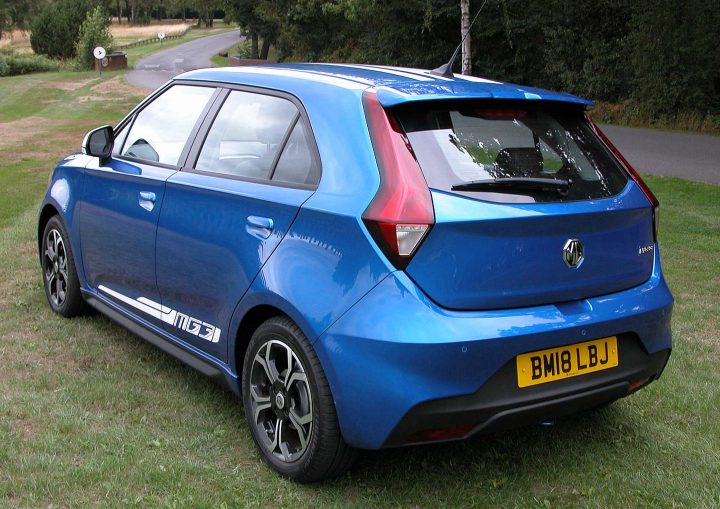 The New MG3 has price and smart looks on its side and of course the seven-year warranty is a big feature. Performance is limited but will suffice for many who just want a sensible new car at a sensible price rather than a used one. The ride is generally comfortable; it’s roomy for its type and size so it’s a safe and sound option rather than an aspirational one.