You are here: Home / First Drives / New Mazda2 adds up for successful brand 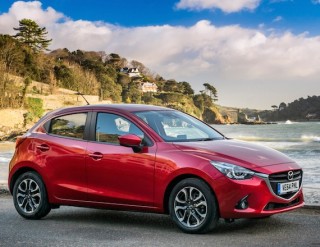 After a market–beating year, Mazda intends to build on its popularity with the latest generation of its best-selling Mazda2 now being launched.

The fourth generation city car is completely fresh design with new petrol and diesel engines, manual and automatic transmission, bursting with the latest in-car communications and info-tainment systems as sell as being lighter and stronger.

To get the best Euro-safety rating the Mazda2 comes with hill-hold assist, tyre pressure monitoring, dynamic stability and traction control while top trimmed models get lane departure warning and active city braking technology. There is also a further safety pack available providing additional sensors and alerts as well as a head-up display which is a first in the B-sector. 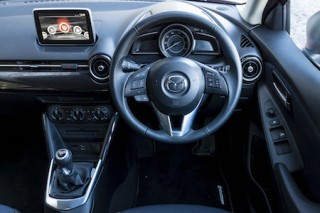 To give the Mazda2 a sportier feel the wheelbase is longer than before and the track is wider while the new lightweight monocoque design sets the cabin further back for improved balance and there are shorter overhangs. Mazda2 brand analyst Clare Bishop said it had closely studied competitor models and customers’ feedback to create the new generation model and give it a user-friendly interior with state-of-art infotainment which will it is hoped widen appeal to young buyers.

“Mazda2 is our best seller by a long way,” she said. It is likely to account for 11,000 out of 50,000 Mazda registrations this year. “It is predominantly a strong seller to retail buyers and petrol versions will take about 95% of its sales, mostly in the SE-L and SE-L Nav grades.”

Jeremy Thompson, managing director of Mazda UK, said the newcomer followed years of consistent growth for the brand in Britain which outstripped the market average by twice or three times as much since 2012 and the company is predicting 2015 registrations will exceed 20% over 2014 figures at a time when the industry said sales could be flat.

“Each of our 137 dealers is likely to sell an additional 50 cars in 2015 and they are very happy with this prospect, while eight out of ten customers are retail buyers and two-thirds will acquire them on PCPs thanks to our highly competitive finance options.”

There are five new Mazda models planned to be unveiled this year and that means the Mazda3 which appeared early 2014 will then be its oldest model.

“Having such a young range of cars with the latest technology and powertrains will give us a huge advantage this year and for a some time to come,” he added. 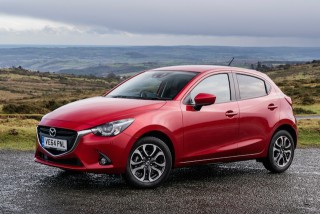 There was a £15,000 special Sports Launch Edition 90ps 1.5 petrol and they rapidly sold out with pre-ordering but as the books build it is expected the SE-L Nav will become the most popular.

The 90ps 1.5 petrol SE-L Nav we tested was at its best when not pressed on demanding country roads but was responsive enough around built up areas.

Road rumbles and a stiff ride were evident on poor surfaces but it handled reasonably well and felt safe and surefooted with a predictable nature.

The five-speed manual gearbox was left hunting for the best ratio on twisting hilly test route and it lacked power when picking up from low-revs and I found myself wishing it had a better spaced set of gears with an additional 6th ratio.

As a result it had to be rather energetically paddling along and this was reflected in our fuel consumption of 43.7mpg over a mixed selection of roads.

Jumping into the 115ps 1.5 with its six-speed gearbox proved very interesting. It produced more power, was more responsive, smoother and quieter but it also pushed up economy to 46.3mpg.

The major controls were a delight and you can get use to the console control and big screen to pack information into a neat high set display, including the clear navigation option.

The 90ps diesel was actually over £19,000 as tested in top trim but it was arguably the best of the new breed with plenty of useable strong pulling power from low revs and so long as you anticipated and selected the best gear it was rapid overtaking when opportunities were presented.

What’s more over winding coastal roads and in built up areas it returned 55.5mpg.

Surprisingly it was a thoroughly composed and quiet diesel as well and this would be my choice, particularly if I intended to keep it for a while or covered high mileages to offset the initial stiff price.

The new Mazda2 breaks away from the previous joint venture which gave us the Ford Fiesta and the new car from Japan is a derivative of the Mazda CX5 platform.

It has a small boot and the rear seats are a bit tight on shoulder room but in the front there is adequate room for two people of average height. Refreshed styling inside and out with new powertrains underneath will appeal to existing Mazda2 owners and the latest technology will also win over some technophiles but whether that is sufficient to pull new drivers into the car remains to be seen. At least Mazda is looking down on 2015 from high ground.