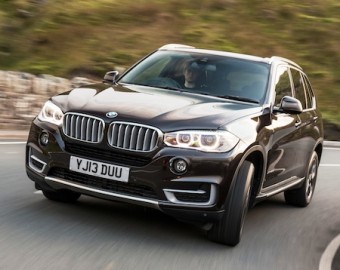 But in reality the on-the-road prices will be much higher due to must-have options and packs.

The X5 was first introduced in 1999 and over 1.3 million have been sold worldwide with the UK averaging around 5,500 units a year. But at least 6,000 annual sales are forecast for the new generation US-made models due to the introduction for the first time of new lower starter price versions with two or four wheel drive and both powered by a 2.0-litre, four cylinder, 218hp diesel engine.

Phil Winders, BMW UK’s product manager for large cars said at the UK motoring media press launch, the new X5 is more about evolution than a revolution. It’s bigger, bolder, and lighter with a much improved cabin. Other improvements include higher specification, significantly more fuel efficient Euro VI engines with lower CO2 emissions which reduce tax costs. Of course the lower priced additional 2.0-litre models will now put the X5 in the reach of more potential customers.  He estimates that the new 2.0-litre 25d, 218hp turbodiesel 2/4WD models will account for 20% of all X5 UK sales but the 2WD variant will only appeal to 2% of buyers.

When it comes to levels of specification Winders said that in the UK the X5 is being offered with SE or M Sport specification plus the M50d M Performance model.

On the subject of price Winders said that in reality the price increase for mainstream versions reflected the new technologies, new safety features and higher specification the latest X5s offered.  He added that traditionally 65% of X5 sales go to retail customers and the remainder to business users. 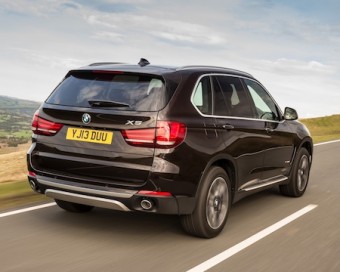 At the UK media launch based at Goodwood House BMW dished up the X5 M50d flagship models.

This engine is now 12% more efficient with fuel consumption improved by 4.5mpg to 42.2mpg in the Combined Cycle with CO2 emissions down by 22g/km, to 177g/km.   With the lower emissions VED road tax is reduced by £40, costing £335 in the First Year rate and then £220 for the second year onwards. Company car drivers will see a 4% improvement in their Benefit-in-Kind tax which will be 30%.  Power output is 381hp with a massive 545lb ft (740Nm) of torque from 2,000rpm boosted by a new three-phase turbocharger.

The top speed is restricted to 155mph but the zero to 62mph acceleration time takes just 5.3 seconds.  How impressive is that for a vehicle still weighing almost 2.2-tonnes? For the record my 100-mile road test drive returned a 29.4mpg fuel consumption figure and this only reduced slightly after an hour’s off-road test session.

As standard all new X5 models have an eight-speed automatic transmission so the closely space ratios are engaged seamlessly and quickly. Drive to all wheels is through the new xDrive system and it is the only system says BMW that can deliver almost 100% of its driving torque to front or rear wheels as required meeting driving conditions, on or off road.

The X5 has always been a sharp handling ‘executive’ large SUV/SAV but with limited off-road capability. It doesn’t come close to the off-road abilities of the new lightweight Range Rover or its Sport derivative. But on-road it just about remains ahead of the agile new Range Rover Sport but easily out-performs the ‘lofty’ Range Rover, the bulbous Audi Q7 and the also-rans in this sector – the Mercedes M-Class and Porsche Cayenne. The new X5’s off-road capabilities have in fact improved over the years and the new one is better again but it’s no mud-plugger and in fairness it’s not really aimed at that market.

Driving over the rough-stuff, hills, mounds and forest/rally tracks around the Goodwood Estate it was sure-footed enough with the xDrive system with traction control being backed-up by the descent control which is operated by the speed limiter within the cruise control function.  This more than anything kept the vehicle safely under control going up and down wet/muddy tracks at a low controlled speed which produces most grip for the tyres.  The ground clearance and suspension travel are the X5’s limiting features off-road. On-road the new X5 has sharp handling, improved steering response and is more or less body-roll free. Given the size, weight and bulk of this vehicle it still remains a very capable and easy to drive Sports Activity Vehicle.

Inside the X5 there are the most improvements in terms of more specification and quality.  It is now close to limousine standards and beautifully put together.  There are still lots of controls and switches to master. These include a new all round vision facility which not only gives, front, rear and side pictures on the screen for off-road driving and on-road parking, but an overhead parking view as well. This uses clever software in the computer to generate an overhead view using actual side/front/rear images merged with the vehicle’s dimensions to get the overhead view. 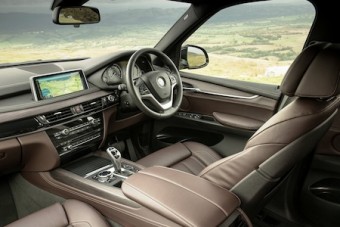 The ECO PRO function allows the driver to set the driving response and suspension settings ranging from Eco to Sport+ modes. Comfort I found was the best mode overall as the ride can be very firm on poorer road surfaces, especially with the 20-inch alloy wheel option.  Wind and road noise intrusion was also significant.

Rear seat legroom has not increased greatly so it could not be called roomy and the optional sixth/seven seats are only for occasional use. The load area remains large though and the split rear tailgate makes loading of heavy items easy.

The new BMW X5 is better in all ways than its  predecessors but the new Range Rover Sport has got closer in areas of on-road handling performance, quality, refinement and driver support technologies. Throw in off-road abilities and the Range Rover Sport has become the sector’s most ‘rounded’ vehicle.