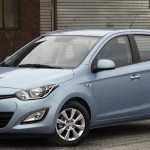 The Hyundai i20 has been one of the most successful models in the short but impressive history of the Koran car maker. Starting as a repair business it has become one of the most significant players in the industry. Hyundai was established in 1967, came to the UK in 1982, the i20 was launched in the UK in 2009 before being revised in 2012 and a new generation is being readied for 2015. It … END_OF_DOCUMENT_TOKEN_TO_BE_REPLACED