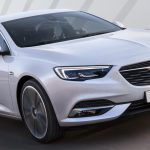 First impressions certainly last with the new Vauxhall Insignia, says Robin Roberts. After being launched in 2008, the Insignia Mk2 hit UK roads in March, initially as a five-door but it’s now been joined by Sports Tourer semi-estate and they share a wide range of updated petrol and diesel engines. There are seven trim levels in a range running from about £17,200 on the road £28,400 in the … END_OF_DOCUMENT_TOKEN_TO_BE_REPLACED