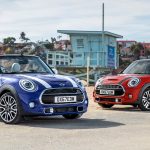 The Mini brand when British owned, or MINI now under the control of Germany’s BMW Group, celebrates its 60th anniversary in 2019. This year the Convertible celebrates its 25th anniversary after going on sale in 1993 as the Rover Mini Cabriolet. Although now German owned, Oxford Plant remains the British home of MINI although some models are built in other countries now to meet the … END_OF_DOCUMENT_TOKEN_TO_BE_REPLACED