You are here: Home / Motorsport / Jann is back on the attack 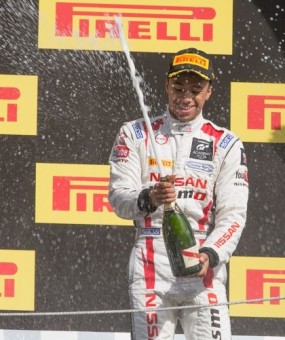 Nissan’s Jann Mardenborough has recovered from a serious sports car crash and made a successful start to his GP3 season last weekend with a podium finish at the Circuit de Catalunya in Barcelona, ahead of Sunday’s Formula One race.

The young British racer headed straight to Spain after returning from Nissan’s LM P1 Test in the U.S. last week and immediately made good on his promise to be a regular podium finisher in 2015.

His performance will not go unnoticed by F1 teams looking for new talent to sign up.

Mardenborough had his work cut out for him in race one on Saturday as he had only managed to take 15th place on the grid due to a red flag but an incredible drive saw him work his way through the field, all the way up to fourth by the chequered flag.

He produced another spirited drive in race two, offering a great example of professional race craft before taking third place and his first podium of the new GP3 season.

“I managed to get past a few cars at the start but then got mugged into turn one,” said Jann.

“I decided to sit tight and bide my time, which worked out well as I was able to then fight for the last podium place. Who knows what the result would have been if I had got through turn one without any dramas! I have worked hard over the winter on my driving style and now everything I learned last year has helped me this weekend. I can’t wait for the next race now to see what I can do with a good qualifying position.”