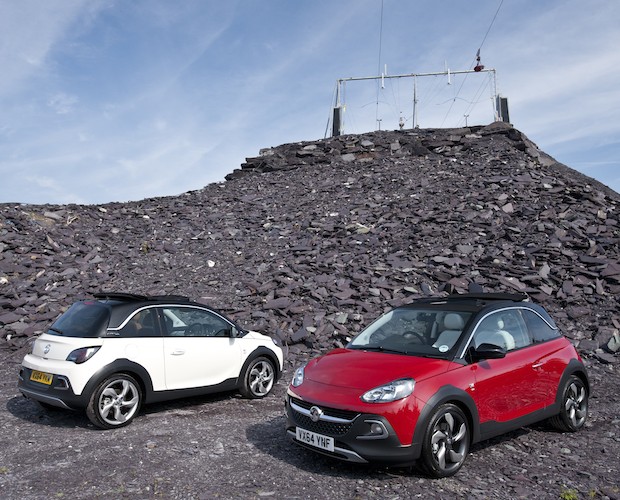 Not only does the Adam get an electric folding black or brown canvas roof in the Rocks Air derivative, but it gains a harder edge with bespoke beefy lower bodywork, raised ride and wider footprint for both hatchback and Air.

Underneath the small bonnet you can order the new Rocks with the latest 115ps 1.0 litre three-cylinder Ecotec engine and six-speed manual gearbox which make their debuts in the car before being used in new Corsa and other small models carrying the Vauxhall badge.

Vauxhall’s familiar 1.2 and 1.4 litre engines and five-speed gearboxes are also available in the Rocks range, which starts at £14,695 this month. 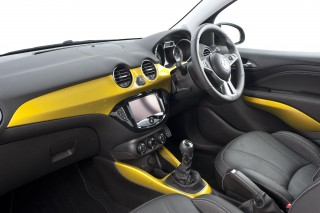 For additional comfort there is the sector leading heated steering wheel and heated seats options.

Ian Mitchell is Vauxhall’s small-cars manager and believes Rocks will change the appeal of the car and make it more attractive to fashion conscious male buyers.

“This year we expect to sell about 13,000 Adam models in the UK this year and 16,000 next year,” he said. “Rocks is going to be an exclusive niche model and account for about 2,000 registrations next year but we believe 75% will be the Air derivative.

“Historically about 30% of Adam buyers have been men but the dynamic appeal of the Rocks and Air is likely to lift this by a further third to 40% of sales to men who want something different and distinctive.”

Greg O’Daniel is the Vauxhall engineer who did much of the Ecotec development work over the last three years and said it is really significant engine for the company and the new six-speed manual gearbox is also highly important.

“It is much lighter than other transmissions and we specified it had to have an extremely smooth change action,” he said.

“It has been carefully matched to have ratios which make the most of the Ecotec engine’s power characteristics and if you do follow our advice you will get really good economy figures and 119gkm emissions.”

For the new three-cylinder engine, Vauxhall has fitted a counter-shaft to reduce inherent imbalances in this type of engine, and it really has paid off.

Unlike other three-cylinder small capacity engines now being used by rivals, the Ecotec is incredibly smooth and quick revving.

You might be forgiven for thinking it was a four-cylinder engine until you look under the bonnet and count the sparking plugs and note the small size of the power unit.

The willingness to rev will delight drivers while its comparative quietness will also please the ears.

The matching new six-speed gearbox really is a refined piece of kit with flick of the wrist light and quick changes and no undue noise.

Vauxhall has done some further work on the chassis, raising the ride height 1.5 centimetres and tuning the springs and steering as well as the brakes to improve responsiveness and comfort. It turns, slows and rides much better than the standard Adam.

The whole chassis and powertrain is now a very sophisticated package, edged with bespoke distinctive bumpers front and back, special wheelspoke “clips” and unique interior colours and seat finishes. Even the open roof does not generate excessive noise.

Adam Rocks is not the fastest, most powerful or economical car in its class but it has a strong individual appeal with its styling and the Air version will give it additional appeal on top of its dynamic improvements and qualities on the road.